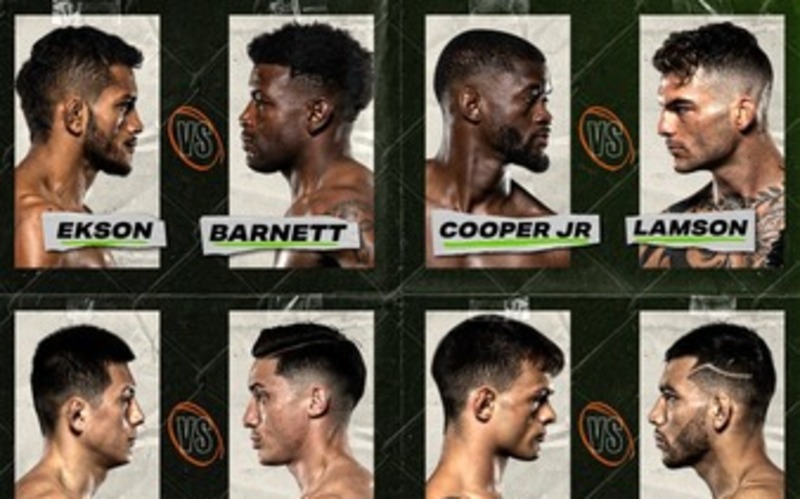 Reinaldo Ekson comes into this main event bout the 39th ranked featherweight in Brazil and Mike Barnett will come into this fight the 59th ranked featherweight lightweight in the US Southeast. Ekson is 17-5 and comes into this fight on a three-fight winning streak. Seven out of his 17 wins are submissions including his three most recent wins. His opponent, Mike Barnett, is the number one ranked lightweight in Alabama and is coming off a TKO win over Clarence Brown at Empire FC 12 in June. Barnett is 11-3 and has eight wins by knockout, and has never been knocked out but has been submitted in one of his three losses.

Edwin Cooper Jr. was originally set to fight Aaron Blackie at PFL Challenger Series 4 but Blackie withdrew. Cooper will now be fighting 17-fight veteran, Troy Lamson. Lamson is 13-4 but he is currently on a two-fight losing streak. Prior to those two losses, Lamson was on a seven-fight win streak with wins over guys like Reggie Merriweather, Joe Elmore, and Robert Hale. Edwin Cooper Jr. is currently ranked number two for featherweights in New Mexico. He is 5-1 as a professional and is coming off a decision win against Andrew Johnson in September. Cooper’s only loss was a submission loss to Sean William Cerveny in January 2020.

Boston Salmon will be fighting his second fight after being cut from the UFC at PFL Challenger Series 4. He will be taking on the number eight ranked featherweight in South Korea, Do Gyeom Lee. Lee is coming off a decision loss to Ali AlQaisi at UAE Warriors 24. Salmon, on the other hand, won his first fight post-UFC with a DQ due to an illegal knee against Shawn West at LFA 84. Boston Salmon went 0-2 in his UFC run losing to Khalid Taha and Randy Costa via knockout. Salmon will come into this fight against Lee with a two-inch height and a three and one half inch reach advantage.

In the opening fight of the night, Scottie Stockman will put his three-fight winning streak on the line against Brahyan Zurcher. Zurcher comes into this fight undefeated at 2-0 with both of his professional wins being by submission, including a triangle choke finish at Combate Global 16. He is the number five ranked featherweight in Nevada while Scottie Stockman is the number 39 ranked lightweight in Florida, according to Tapology. This fight will be the classic striker versus grappler matchup. Both men will be fighting for a chance to change the course of their professional MMA careers at PFL Challenger Series 4.