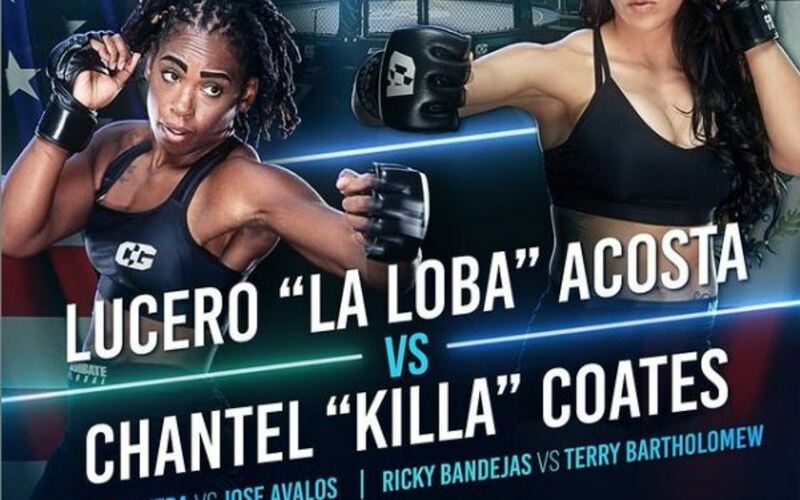 Combate Global returns tonight after a historic event last Sunday, reportedly having the highest viewership rating of all combat sports last weekend, including a UFC card and a massive Bellator card. They will look to follow up on that momentum tonight with Combate Global 16. This card features more fights than usual for a Combate Global event, with eight fights happening live at Univision Studios in Miami, Florida.

The main event brings Invicta FC veteran Chantel Coates to “La Jaula” to face Combate Global fan favorite “La Loba” Lucero Acosta. “Killa” Coates sports an official 1-1 record professionally, but also has a win from a Invicta Phoenix Series tournament that was an exhibition match. That match occurred in 2019 and was her last appearance in competition until tonight. Acosta is 2-1, rebounding from her first professional loss to pick up a first round TKO victory in her last fight back in April.

Also on the Combate Global 16 main card, former Bellator bantamweight contender Ricky Bandejas returns to action for the first time since being cut by the organization when he faces CFFC and Shogun Fights veteran Terry Bartholomew. After picking up a scintillating upset KO over James Gallagher in his Bellator debut, Bandejas went 2-4 with the organization and now sports a 13-5 record overall. He will face the 7-4 “Duke” Bartholomew, a submission specialist who has lost his last two fights.

Recent Titan FC title champion Wascar Cruz steps into the cage again at Combate Global 16 as well, taking on former Bellator and CFFC veteran Claudio Ledesma at flyweight. Cruz recently had a two-fight win streak snapped and his Titan belt lost at the hands of Victor Dias at Titan FC 68. He’ll face a game opponent in Ledesma, who has gone to ten decisions in a row, losing his last two.

Wascar Cruz def. Claudio Ledesma via TKO (ground and pound), 4:24 of Round 2