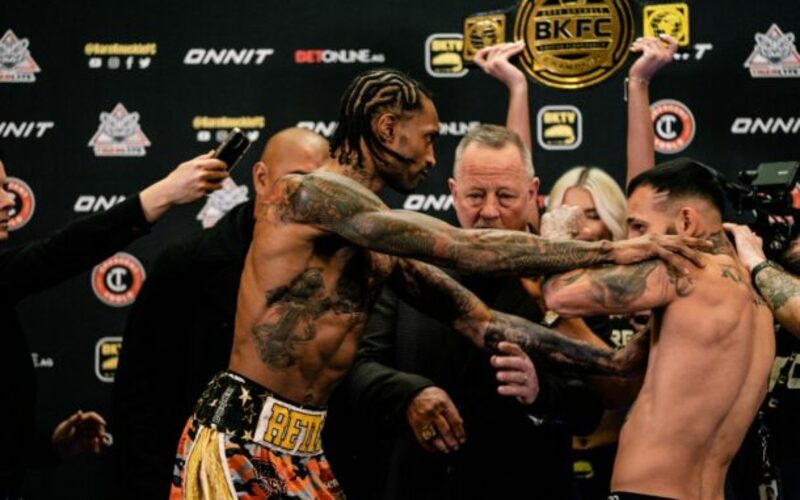 In the main event, the interim bantamweight title is on the line after champion Johnny Bedford was forced out of tonight’s contest. His scheduled opponent, Jarod Grant, remains on the card and will face short-notice replacement Anthony Retic. “Kid Gatti” Grant has gone 4-0 in the organization, earning stoppages in all outings. Alabama’s Retic, meanwhile, will also be sporting an undefeated 2-0 BKFC record, most recently picking up a scintillating KO at BKFC 17. The two were set to square off at BKFC 12, but the fight fell through. Standing at 6’1 with a 79-inch reach, Retic will have an extraordinary height advantage over the 5’6 Grant, who has a 68-inch reach.

In the co-main event, British bare-knuckle boxing star Connor Tierney makes his BKFC debut against another short-notice replacement in Jeremiah Riggs. “The Brum Town Bomber” Tierney was a high-profile signing for the organization, and he will look to make a good impression against “Big Rig” Riggs, who picked up a first-round finish in his last fight at BKFC Fight Night Jackson.

Connor Tierney def. Jeremiah Riggs via KO (Left Hook) at 1:31 of Round 5

Dustin Pague def. Eddie Hoch via TKO (Referee’s Stoppage) at 0:45 of Round 1

Jack Grady def. Gabe Sacchetti via TKO (Referee’s Stoppage) at 1:14 of Round 2

Devin Gibson def. Kody Murray via TKO (Referee’s Stoppage) at 1:44 of Round 4

Stanislav Grosu def. Christian Torres via KO (Uppercuts) at 1:01 of Round 1

Damon Bell def. Art Driscoll via TKO (Doctor’s Stoppage) at 0:37 of Round 2

Sito Navarro def. Anthony Prater via TKO (Referee’s Stoppage) at 1:22 of Round 1