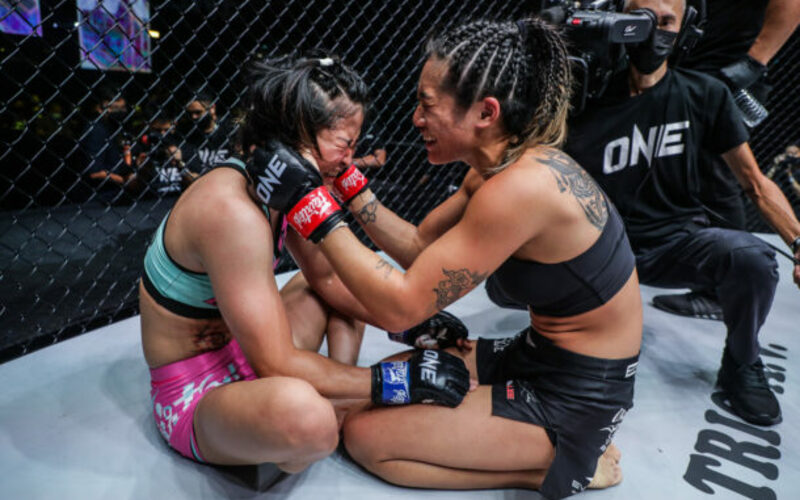 Stamp Fairtex came up short against Angela Lee in their main event matchup at ONE X on Saturday, March 36, but the Thai star is taking the positives away from her first MMA title bid in ONE Championship.

Stamp soared to the forefront of the atomweight kickboxing and Muay Thai divisions by winning both belts at the start of her ONE tenure. All the while she was winning gold, she was preparing for a run in mixed martial arts to become the first-ever three-sport World Champion.

After dropping both of the striking titles, Stamp won the ONE Atomweight World Grand Prix to get her shot at the returning Lee at ONE X. Most impressively, she won the tournament by showcasing her developing ground game.

But after her battle with Lee, the Thai superstar admitted she still needs more seasoning to take home the gold.

“I would like to say sorry to all of my fans, my team, and my boss. I did my best last night but I can’t take the world title back to my home country. I learn a lot from this fight, and accept that I have to gain more experience and MMA skill,” wrote Stamp in an Instagram post.

“After I come back to the camp, I will train harder, and will come back as a better version. And congratulations Angela Lee, you are my idol.”

The positive mindset is what led the Fairtex Gym athlete to the top of all three sports she has competed in the inside of the Circle. She is a student of the game with incredible potential, and although she is focused on getting more experience, she is not far off from the peak as it stands.

Stamp nearly defeated Lee at ONE X. The elite striker delivered a thudding liver shot to the champion that visibly hurt her, and it would not have taken many more precise shots to end the contest. But Lee’s resolve allowed her to cover up and weather the oncoming flurry.

It is not unfathomable that the 24-year-old could be the champion right now. After the learning experience against Lee, and a renewed focus on her camp to improve her shortcomings, Stamp is poised to return to ONE as an even more calculated and dangerous athlete.

That should be a scary thought for the entire atomweight division.