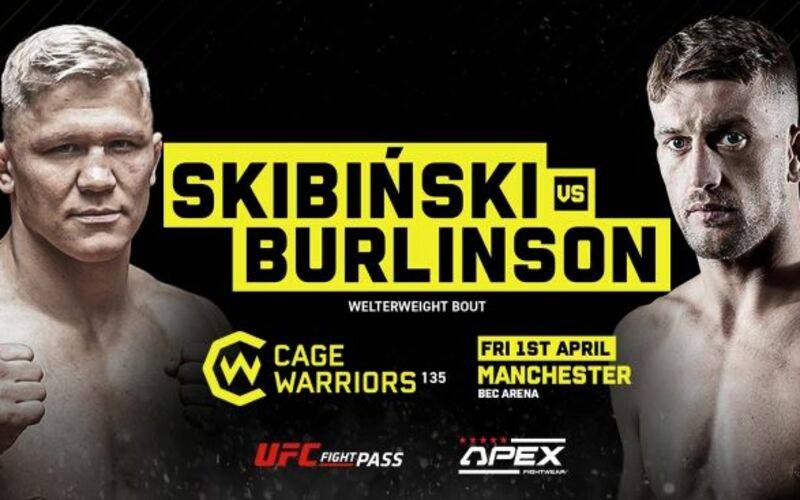 Cage Warriors is set to return this weekend with a doubleheader starting with Cage Warriors 135 – Skibiński vs. Burlinson on Friday night at the BEC Arena in Manchester, England. The card will begin on April 1st at 1:00 p.m. ET/10:00 a.m. PT and will be available for live streaming through UFC Fight Pass.

Friday’s card will feature a total of 13 bouts culminating in the main event of Daniel Skibiński (18-6) vs. Justin Burlinson (6-1) in a welterweight bout. The co-main event is set between Hugo Pereira (5-3) and Matthew Bonner (10-7) at middleweight.

Skibiński, a Polish fighter with a wrestling style, is coming into Friday’s main event seeking his first win within the Cage Warriors promotion. Skibiński is coming off a loss at UAE Warriors 24 against Tahir Abdullaev (12-1). Prior to his last loss, Skibiński was on a 12 fight win streak that began back in 2016. The Polish fighter has been a professional since 2013 and is coming into his peak years of fighting. It is safe to say that Skibiński will want to make a statement in his Cage Warriors debut this Friday.

Standing on the other side of the cage is Justin Burlinson from England. Burlinson was featured on Dana White’s Contender Series in late 2021 where he lost to Yohan Lainesse (8-0) via KO in the first round. Many still think that the 24-year-old prospect will still be able to get back on track and reach stardom as Burlinson started out finishing his opponents in his first six professional bouts after closing out his amateur career with 21 straight victories. Burlinson will look to bounce back since his previous loss against a game opponent in Skibiński.

The co-main event was originally scheduled for former UFC fighter Darren Stewart (12-8) against Carlos de Souza (17-11-1), but the fight was put on hold after de Souza returned a positive Covid-19 test on Wednesday. Instead, Hugo Pereira and Matthew Bonner will be facing off in a middleweight bout for the co-main event. Bonner, who is the former Cage Warriors middleweight champion, is coming off of his title loss to the current champion Djati Mélan (8-0) back at Cage Warriors 131. Prior to the loss, Bonner was on a four fight win streak culminating in him capturing the Middleweight strap against Nathias Frederick (9-3-1) at Cage Warriors 123, where he finished Frederick by rear naked choke in the fourth round. Bonner will look to make a statement as he works his way back to gold.

His opponent, Pereira, is a 40 year old fighter out of Portugal that is looking for a win since his last loss via unanimous decision in 2019 at Bellator 227 against Kiefer Crosbie (8-3). Pereira has finished all of his opponents and has never been finished himself, do not overlook him as he may pull off an upset against the former Cage Warriors middleweight champion in Bonner.

The card also features fights such as Finland’s Edward Walls (10-7) facing off against England’s Liam Gittins (7-4) at bantamweight. Walls is currently on a two-fight skid but in the past he has finished six of his ten opponents in his wins. Similarly, Gittins is on a two-fight skid as well. One of these fighters will be ending their losing streak this Friday in an exhilarating fashion.

Federico Pasquali (6-0) vs. Paull McBain (7-2) at a catchweight of 150lbs will most likely be a very exciting fight. Pasquali is an undefeated 28-year-old fighter that has finished all but one of his opponents and looks to notch his seventh win in his professional career. McBain, who is standing in his way, is a giant featherweight standing at six feet tall and has finished five out of seven of his opponents. He won his previous bout against Konmon Deh (11-9) back at Cage Warriors 132.

In addition, undefeated featherweight prospects Ryan Shelley (3-0) and Magdi Gereev (2-0) will be facing off as only one of these two fighters will get to keep their perfect record. Between the two fighters, all of their wins have come by finish, so expect fireworks in this fight.

The previously-mentioned fighters and so many others will be featured on this action-packed Friday night that fans will not want to miss. MMA Sucka will be providing live results along the way.