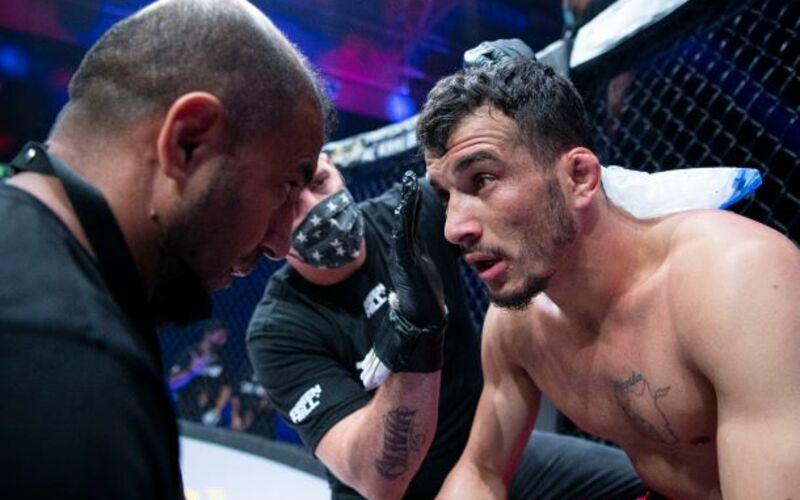 Off the walls of the Siri Fort, the coordinated chants of “LION” filled the hall as round one began. Bollywood stars Tiger Shroff and Disha Patani– who boast a combined 84 million Instagram followers- sat cageside in support of their guy. “The Afghan Lion”, Abdul Azim Badakhshi, did not disappoint the ravenous fans in attendance.

As MMA grows, it begins cropping up in unexpected places. Iconic heroes emerge from markets that never before produced an athlete wielding 4oz gloves. Judging by the event that Matrix Fight Night held in New Delhi on April 1st, onlookers might surmise that MMA is about to boil over into the whole country of India.

The man carrying the event, Badakhshi (13-3), is the top-ranked featherweight in South Asia by Tapology, and the second-ranked featherweight in the Middle East. His unanimous decision win over Fabricio Oliveira in the main event of Matrix Fight Night 8 was the first time he had won by anything except a finish in his thirteen wins.

After the win, he gave a nod to the fighting zeal of his upbringing: “I have come from Afghanistan. While my country is in critical condition, I wish to spread the fighting spirit of Afghanistan. I will continue to fight and keep making my nation proud. I also want to thank the Indian fans for showing their support to me”.

Although Badakshi originates from the proud country of Afghanistan, he lives and trains in Mumbai at MMA Matrix Fitness Center. According to his manager, he comes from nothing. Today, he has over 180,000 followers on Instagram. He has been fighting in India ever since his pro debut, rising to prominence in India’s founding promotion, Super Fight League. Once SFL became too small for his talents, he took fights in ACB and Brave CF, as well as regional fights in his home country of Afghanistan.

Now on a win streak and coming off a thrilling win, Badakhshi is ready to take his game to the next level and fight in a US promotion this year. Carrying the support of two large countries and a ton of talent to back it up, he would be a coveted addition to any roster.