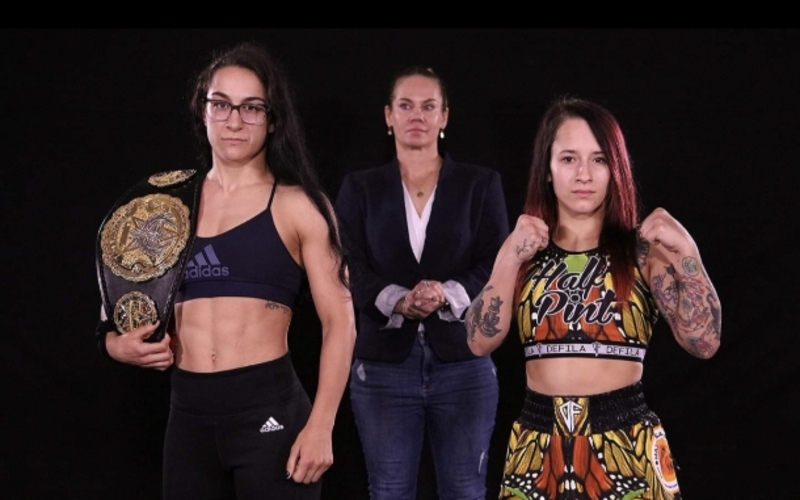 Invicta FC puts on one of their best cards in a long time, featuring two of their most established names in the promotion. Live from the Memorial Hall in Kansas City, Kansas, a fight card of seven stellar fights goes down tonight. Chris Presnell with MMASucka is on site providing live Invicta FC 47 results.

For two fighters who have accomplished plenty in the world’s most prominent all-female promotion, the biggest test available for Emily Ducote and Alesha Zappitella is to fight each other.

Zappitella is the former atomweight champion fighting out of Michigan. Rather than stick around 105lbs for a trilogy fight with champion Jessica Delboni, she opted to go up a weight class and go straight for the title. Zappitella’s dream is to fight for the UFC, before first she must prove that she can hang with elite strawweights.

While an all-star wrestler, Zappitella will have a significant size and reach disadvantage at 115lbs. For her to implement her game and adapt to larger foes, she will have to follow the mold of trailblazers like Daniel Cormier and learn to get inside to grapple her opponents. If Zappitella can pressure Ducote and not settle at range, she could become the first fighter to win belts in two weight classes in Invicta.

The incumbent strawweight champion, Ducote, is looking to make her first title defense against Alesha Zappitella. Ducote is coming off a viral headkick knockout of UFC veteran Danielle Taylor last August and is 3-1 with the promotion. The BJJ brown belt will look to counter Zappitella’s wrestling with her grappling should the fight go to the ground, and stay at range with her four inch reach advantage on the feet.

The winner of this championship fight is right in the rangefinder of the UFC and can likely expect the call.

Rest of the Card – Invicta’s Best

A myriad of number one contenders could emerge from Invicta FC 47, as prominent fighters are unfolding in every weight class. In the featherweight co-main event, Stockton’s Chelsea Chandler battles Courtney King in King’s first appearance since a fight with Kayla Harrison at Invicta FC 43 . The fight easily could have been for the promotion’s vacant featherweight title, as both women are the division’s most experienced competitors.

At atomweight, Jessica Delboni’s next challenger could be decided by the fight between Jillian DeCoursey and Lindsey VanZandt. A bantamweight battle between Brittney Cloudy and Serena DeJesus provides some much-needed movement to the division, as both fighters are coming in riding win streaks.

Emily Ducote def. Alesha Zappitella via Doctor Stoppage (Eye Injury) at 5:00 of round 2 to defend the Invicta FC Strawweight Championship

Jillian DeCoursey def. Lindsey VanZandt via KO (Right Hook and Hammerfists) at 1:01 of round 1

Fatima Kline def. Sidney Trillo via TKO (Ground and Pound) at 4:45 of round 3