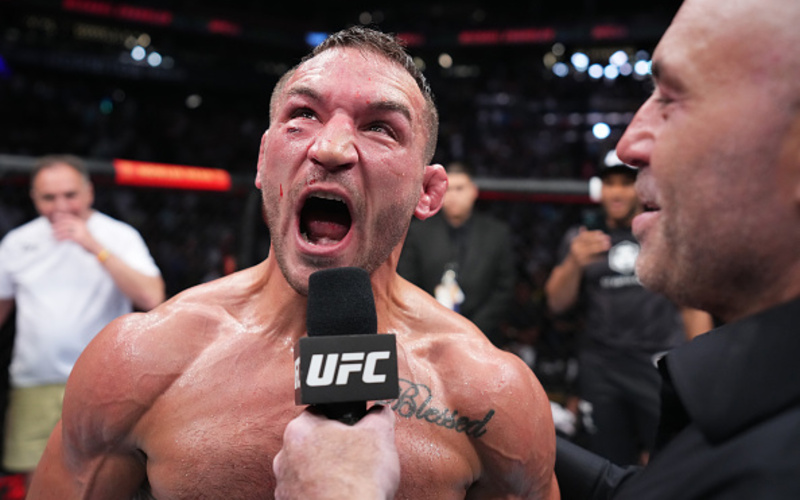 Michael Chandler, the UFC lightweight division’s pitbull, made a statement with his devastating KO victory over fan favorite Tony Ferguson, at UFC 274. Ever the entertainer, Chandler took the mic to call out not one but 3 names on his hit list to the top. After Chandler’s WWE-Esque post-fight interview, one name in particular responded. Dublin’s most notorious son, Conor McGregor. With Chandler’s proposal seemingly accepted as a potential future bout, here is the breakdown for the hypothetical fight between Conor McGregor and Michael Chandler.

After landing the KO of a lifetime, Chandler’s ecstatic, name-studded call-out, whetted the appetite of fight fans the world over. The Missouri native took fire at both headliners: Charles Oliveira and Justin Gaethje. However, it was his call-out of Conor McGregor at 170lbs that really stood out.

“Listen, I’m ready to come back [in the] main event! There is not one MMA fan on the planet that doesn’t wanna see me rematch you, Charles [Oliveira]. Or rematch you, Justin Gaethje – a rematch of Fight of the Year 2021. Five rounds for the UFC lightweight title! And Joe, if Hunter Campbell and Dana White have a momentary lapse in judgement, and they give this title shot to someone else, I’ve got one dude on my mind… Conor McGregor, you gotta come back and fight somebody. I am the most entertaining lightweight on the planet!”

“I’d have a nice knock off this guy, no doubt about it,” McGregor wrote on Twitter. “A firework spectacle. I like the 170 shout also. Tipped him over. I’m definitely game to fight this guy at some stage in my career. I see it happening after tonight. Congrats on a solid win Michael and another barnstormer.”

Yes, everybody and their grandmother tend to call out McGregor after a win. After all, he is the big money fight that people will sacrifice a title shot to share the Octagon with him. Even former champ and headliner, Charles Oliveira cast his hook into the McGregor pond, to be seemingly shot down by the Irishman (check out Conor McGregor’s thoughts on UFC 274). However, this fight makes more sense than McGregor vs Oliveira for the belt, think of it as a lightweight title contender match at welterweight. Not only will McGregor get a chance to earn his title shot, but would allow for the lightweight division to work itself out in the meantime (hurry up Islam Makhachev and Beneil Dariush!).

So with Conor McGregor vs Michael Chandler as a potential matchup in the future, here are some keys to victory.

Michael Chandler is a former NCAA Division 1 wrestler. However, it is a tool he uses only on special occasion. His preference for fire-fights and highlight-reel knockouts is almost a complete negligence of one of his most notable attributes. Conor’s takedown defense is fairly solid, but a definite weakness in his skill set. Wrestling early would ingrain a defensive mindset in McGregor from the start, opening other potential opportunities. Chandler’s top control and ground ‘n’ pound would cause substantial damage to the Irishman, who has struggled with aggressive top control in the past. Guys like the similarly built Chad Mendes, Khabib Nurmagomedov, and even Dustin Poirier were able to rack up some substantial control time against McGregor.

With McGregor’s mindset on wrestling, Chandler can now go to work with his hands. Michael Chandler has ridiculous power, so creating any opening would be a huge advantage for the stocky Missourian. Replicating Khabib’s overhand right with Chandler’s power may be enough to put McGregor out cold. Chad Mendes was also able to score up top with his boxing after securing a takedown, further proving the point that wrestling should be implemented early in Chandler’s game plan.

McGregor is a slick counter-puncher, one of the best in fact. His ability to make reads on an opponent’s shot selection and distance has led to many knockouts in his illustrious career. Therefore, feints would be a useful tool to help draw out some of these counters, creating the perfect opportunity for Chandler to capitalize on these misreads. Also, keeping McGregor on the back foot with pressure would allow Michael Chandler to shoot with maximum explosivity. With this pressure, he could also cut McGregor’s lateral movement down with some potent switch punches to keep the Dubliner exactly where he wants him. Landing big shots to the body, whether standing or on top would sap McGregor’s often criticized gas tank.

In this hypothetical Conor McGregor vs Michael Chandler matchup, it is the Irishman’s perfect shot selection that may bring him the victory. Counter-striking Chandler as he throws his dynamite-laden punches could crumple the chin of the tough American. Another opportunity would be to counter the potential takedown offence with his perfected bolo uppercut. This weapon, if landed correctly could deter Chandler’s wrestling offence, and serve to break down his opponent.

As stated above, McGregor is the master of range control. Using his reach advantage to control Chandler’s lead hand, would not only serve as a range detector against his shorter foe but force action from his rear hand. Knowing that an attack can only come from one limb, would help Conor counter the now obvious right hand. Conor did this to great effect in his fight with Chad Mendes.

Pressure wrestling works both ways. Applying pressure to the pressure wrestler helps nullify the explosivity of their shot, as it is much harder to shoot on the back foot to get enough depth penetration for the takedown. However, caution is advised when doing this against Chandler, due to his power. It would be better to not commit to too many long-winded combinations, this is to not risk offering up your hips for a takedown. Chandler, while a tremendous fighter, is fairly hittable; so keeping to basic, short combinations would be enough to score often and avoid an ill-fated fire-fight.

Conor McGregor’s Place in the Sport

With Conor’s return to the Octagon imminent, it is fun to speculate as to what his first fight back will be. Whether it is Conor McGregor vs Michael Chandler, Charles Oliveira or Nate Diaz, the enigmatic Irishman will always have a place in MMA.

Life long martial artist and fan of combat sports, currently competing as an amateur Muay Thai fighter. Besides fighting, I love travelling the world and writing.