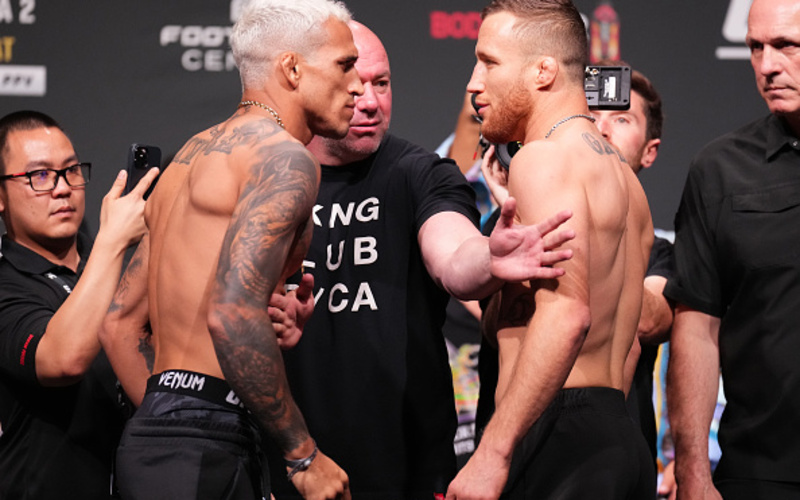 Two title fights top off the UFC‘s card on Saturday night with the strawweight title on the line in the co-main event, plus the newly vacated lightweight title in the main event as MMASucka provides UFC 274 results throughout the evening. Coming into fight week, the lightweight title belonged to Charles Oliveira. He was set to make his second title defense tonight against Justin Gaethje. Unfortunately, Oliveira did not weigh in at championship weight as he came in a half pound over the limit and after being given an hour to shed it off, Oliveira was not able to pull it off. As a result, Oliveira has been stripped of the title and he will be ineligible to win the belt back on Saturday; however, Gaethje can win the belt if he were to win the fight.

Coming into this fight, Charles Oliveira had won his last ten in a row. Oliveira captured championship gold when he defeated Michael Chandler for the vacant title at UFC 262, winning the fight via second round TKO. His ten fight win streak started in 2018, when he put together a five fight win streak in about a year’s time.

Of those five wins, he started off with four straight submission wins over Clay Guida, Christos Giagos, Jim Miller and David Teymur. The fifth win was a second round TKO win over Nik Lentz at UFC Fight Night 152. Following the win over Lentz, Oliveira picked up his sixth straight win and finish in his next fight with a first round knockout over Jared Gordon.

“Do Bronx” picked up yet another finish after that fight, securing another submission win, this time over Kevin Lee in the third round of their main event at UFC Fight Night 170. Finally, the win to secure him a shot at the vacant title was a dominant decision win over Tony Ferguson at UFC 256.

In the vacant title fight against Chandler, Oliveira almost came up short during the first round after getting dropped a couple of times. He was able to hold himself together however, and came back in the second round to finish Chandler with strikes to become the new UFC lightweight champion. Oliveira’s first title defense was at UFC 269 where he picked up yet another submission win as he finished Dustin Poirier in the third round of their meeting.

Two days before the fight, Charles Oliveira was getting ready to defend his title for the second time. Now, after his weight miss on weigh-in day, Oliveira no longer holds the title and because he is ineligible to win the title because of the weight miss, he now fights for the position of number one contender.

After the weight miss, Gaethje may be entering this fight even more fired up and motivated to win as he is now the only half of the main event that is eligible to leave with the title. Gaethje is 5-1 in his last six outings leading up to this fight. The one loss during that stretch was against former champion Khabib Nurmagomedov in their title fight matchup at UFC 254.

In that fight at UFC 249, Gaethje and Ferguson fought an exciting, back and forth war that would eventually see Ferguson run out of energy first as Gaethje finished him by TKO in the fifth round. That win would of course set up his title shot against Nurmagomedov that he went on to lose. Since then, Gaethje has made one appearance at UFC 268 where he defeated Michael Chandler by unanimous decision. Being the only one eligible to do so, Gaethje looks to walk out of his fight with Oliveira with a UFC belt wrapped around his waist.

In UFC 274’s co-main event, a rematch goes down in the strawweight division as Rose Namajunas looks to defend her title for the second time, something she was unable to accomplish during her first title reign. She will be taking on the woman she fought back in 2014 for the inaugural strawweight championship, Carla Esparza. After the twentieth season of The Ultimate Fighter introduced the strawweight division to the UFC, Esparza became the promotion’s first 115-pound champion after defeating Namajunas by rear naked choke in the finale.

Fast forward to nearly eight years later, Namajunas now holds the title while Esparza looks to reclaim the throne as she lost the title immediately after she won it  in a fight with Joanna Jedrzejczyk in 2015. Since they first met at the TUF Finale, Namajunas has since been able to put together a record of 9-2 with multiple title wins over that time. Namajunas first won the title in 2017 when she defeated Jedrzejczyk at UFC 217 by first round TKO. She defended that title once with a unanimous decision win over Jedrzejczyk in a rematch the following year.

Namajunas lost the title at UFC 237 when she was defeated by Jessica Andrade by knockout in round two of their matchup. Namajunas was out for about a year following that fight due to an injury, but when she came back, she squared off against Andrade once again, although she had already lost the title by then. Namajunas defeated Andrade in their non-title rematch at UFC 251.

This win set Namajunas up with the new champion, Weili Zhang at UFC 261. It took just over a minute for Namajunas to win back the title after she finished Zhang by knockout. The pairing faced off in an immediate rematch about seven months later. This time, the fight went the distance as Namajunas remained champion once again as she won by split decision.

As for Esparza, she will be entering this fight with five straight wins behind her. After going winless in 2018, Esparza has not lost a fight since. In her first fight of 2019, she defeated Virna Jandiroba by unanimous decision at UFC Fight Night 150. That win was followed by a majority decision win over Alexa Grasso at UFC Fight Night 159, followed by a split decision win over Michelle Waterson at UFC 249. Esparza’s fourth straight win was another split decision victory, this time against Marina Rodriguez at UFC on ESPN 14. Finally, in her most recent fight, Esparza picked up a TKO win in round two of her matchup with Yan Xiaonan at UFC Vegas 27.

Kicking off the main card will be a fight in the lightweight division as Donald Cerrone faces Joe Lauzon. Cerrone will be entering the fight looking for his first win since 2019. Since then, Cerrone has gone 0-5 with one no contest. His most recent outing was a first round TKO loss against Alex Morono at UFC Vegas 26. As for Lauzon, he has not fought since 2019 when he picked up a first round TKO win over Jonathan Pearce at UFC on ESPN 6.

Following that fight will be a matchup in the light heavyweight division as former UFC light heavyweight champion Mauricio Rua takes on Ovince Saint Preux. These two have met once before back in 2014 when OSP knocked Rua out in just over thirty seconds in the main event of UFC Fight Night 56.

Entering the fight this time around, Rua will be coming off a lengthy layoff following a second round TKO loss to Paul Craig in their meeting at UFC 255. OSP will be entering the fight coming off of back-to-back KO/TKO losses. The first of them was a TKO loss to Jamahal Hill at UFC on ESPN 19 followed by a knockout loss to Tanner Boser in a heavyweight fight during his most recent outing at UFC Vegas 30.

Finally, before the strawweight title fight in the co-main event, what should be a very exciting lightweight fight goes down between Michael Chandler and Tony Ferguson. Chandler will be entering this fight coming off of back-to-back previously mentioned losses to Charles Oliveira and Justin Gaethje. Ferguson enters on a losing streak as well as he has not been able to get a win since his interim title fight loss to Gaethje. Since then, he has lost back-to-back unanimous decisions against Oliveira and Beneil Dariush.

UPDATE: Donald Cerrone has been forced out of his matchup with Joe Lauzon due to illness. Randy Brown vs. Khaos Williams now opens the main card.

Follow along with MMASucka as we provide you with UFC 274 Results throughout the card.