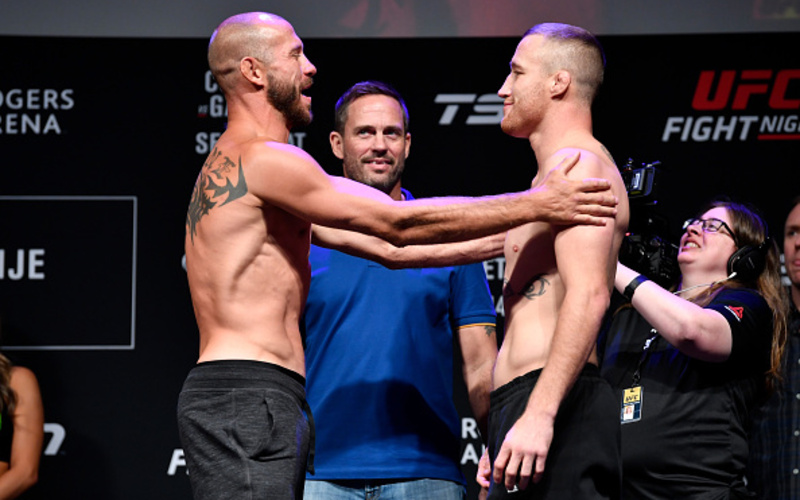 The UFC returns to Canada as they travel to Vancouver for UFC Fight Night 158. In the main event, two of the most exciting fighters in the lightweight division face off. Coming off a TKO loss to former interim champion, Tony Ferguson, Donald ‘Cowboy’ Cerrone returns to the octagon just three months later. He will be taking on former WSOF champion, Justin Gaethje. Gaethje is coming off back-to-back first round knockouts over James Vick and Edson Barboza.

Also on the main card will be the return of heavyweight Todd Duffee. Duffee last fought more than four years ago at UFC Fight Night 71 when he took on Frank Mir in the main event. Mir defeated Duffee, knocking him out in the first round. After four years off, Duffee returns to face Jeff Hughes, who is coming off a split decision loss to Maurice Green at UFC Fight Night 146.

Kicking off the main card will be a light heavyweight bout as Canada’s Misha Cirkunov takes on Jimmy Crute. Crute will look to stay undefeated as he takes on Cirkunov who is coming off a TKO loss to Johnny Walker. Next up will be a fight in the middleweight division as Uriah Hall takes on Antonio Carlos Junior. Hall looks to win his second straight while “Shoeface” looks to rebound from a loss to Ian Heinisch. Finally, before the return of Duffee, is a welterweight fight between Michel Pereira and Tristan Connelly. Both fighters are coming off KO/TKO win as Pereira finished Danny Roberts in his UFC debut at UFC Fight Night 152. Connelly is coming off a fifth round TKO win over D’Juan Owens at Rise FC 4 in July.

Follow along with MMASucka as we provide you with the results throughout UFC Fight Night 158.

*Pereira missed weight at 172 lbs. and will be fined 20 percent of his purse