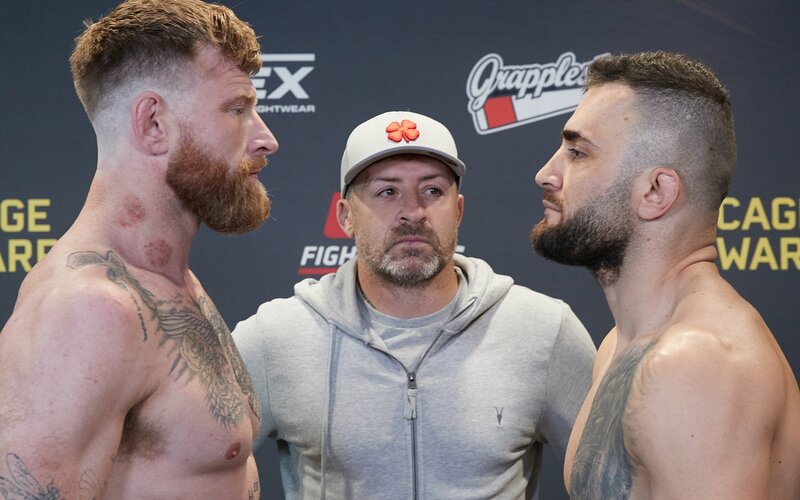 Cage Warriors is back again for a second consecutive day, this time with CW 138 which, like CW 137, is set to emanate from Charter Hall in Colchester, England. The five-fight card will be headlined by a middleweight tilt between England’s James Webb and Italy’s Leon Aliu.

Webb (8-3-1) is coming off a TKO defeat to Matthew Bonner, the winner of yesterday’s main event, in a middleweight title eliminator at Cage Warriors 121. Even with that, the 32-year-old still holds six wins in the promotion and will be looking for a “get-right” performance against promotional debutant Aliu. Aliu (9-1) could be poised to join countrymen Taglio Pagliariccio and Giuseppe Ruggeri as impressive Italian prospects under the Cage Warriors banner, especially if he can become the third man in history to stop Webb. Aliu, 32, has two doctor stoppages on his record, as well as four submissions, and is coming off a fight where he earned his first referee stoppage due to strikes. He tends to favor the guillotine choke, which has been used to secure three of his nine career victories.

The co-main event will feature a bantamweight scrap between British prospects Luke Shanks and Josh Reed. Shanks (9-3), the former flyweight champion of Cage Warriors, will be fighting at 135 pounds for the first time since his promotional debut back in 2018. He lost the belt to Sam Creasey last year, but had an opportunity to win it back just two months later when he met Creasey in the rematch. Though Shanks got a measure of revenge with a first-round knockout of Creasey, he was not able to win his belt back, weighing in approximately two pounds over the championship limit. As a result, he’ll move up a weight class to take on Wales’ Reed (12-6), a 14-fight veteran of the promotion as he looks to show he can be just effective at bantamweight as he was at flyweight.

Saturday’s card, which will feature fans after Friday’s “unplugged” event, is set to get underway at 3:30 p.m. ET/12:30 PT on UFC Fight Pass. MMASucka has fight fans covered with live results to be updated throughout the card.

Oban Elliott def. Herkus Lukošiūnas via Submission (RNC) at 2:34 of Round 1