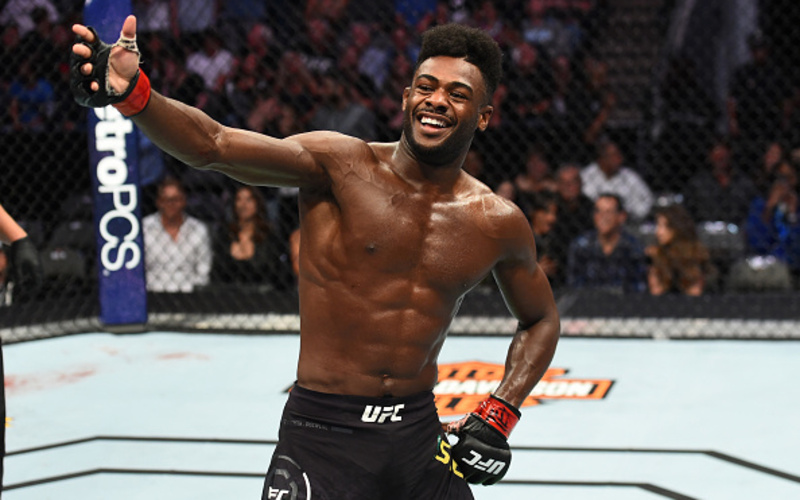 Aljamain Sterling posted a YouTube video, where he reacts to the news that he has been scheduled to face T.J. Dillashaw at UFC 280. The reigning UFC bantamweight champion stated that nothing is official yet, but he also said that he would not oppose fighting in Abu Dhabi and sharing a stage with Charles Oliveira and Islam Makhachev.

In his YouTube video, Sterling said that, unlike the previous time when he was proposed a match in Abu Dhabi, this time he would agree to fight in the United Arab Emirates. He also added that being on the same card with Oliveira and Makhachev is a big thing and that he’s looking forward to fighting Dillashaw if the money is right:

“I’m looking forward to fighting T.J. Like, hell, I’ll go fight T.J. in the parking lot. I don’t give a sh*t. As long as there’s some type of prize money available, a big prize money, I’ll fight him wherever. We could go fight in freaking Alaska for all I care. As long as the money is right. And again, I’m not asking for anything outlandish. I never even put a price out.”

Watch Aljamain Sterling talk about fighting Dillashaw in the video below:

The news about the matchup was reported by various media outlets a few hours ago. According to the reports ‘Funkmaster’ would defend his 135 lbs belt against Dillashaw in the co-main event of UFC 280. The event is scheduled to take place in Abu Dhabi on October 22nd.

Long Island’s native has a 21-3 professional record. In his last outing, he beat Petr Yan by a split decision at UFC 273 in his first bantamweight title defense. Sterling won the UFC gold by disqualification after Yan threw an illegal knee to Sterling’s head when he was kneeling. Prior to that, Sterling had a seven-fight win streak, including submission wins over Cory Sandhagen and Cody Stamann.

Dillashaw, who sports a 17 – 4 MMA record, is a former UFC bantamweight champion. He won the belt thanks to a fifth-round TKO win over Renan Barao at UFC 174. Dillashaw would eventually go on to lose the belt to Dominick Cruz in 2016. He regained it by defeating Cody Garbrandt a year later. Dillashaw vacated the title in 2019 after testing positive for EPO in midst of his flyweight title loss to Henry Cejudo. He served a two-year suspension and defeated Cory Sandhagen by a split decision in his comeback fight back in July 2021.