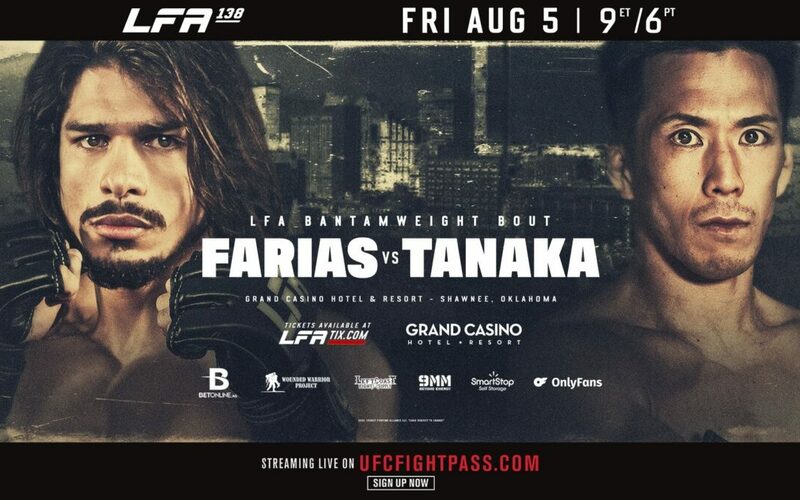 Legacy Fighting Alliance is set to return to the Grand Hotel Casino & Resort in Shawnee, Okla. for LFA 138, and the regional stalwart is packing heat with an excellent main event in the bantamweight division. Brazilian Ary Farias is set to take on Michinori Tanaka of Japan in a clash of experienced and versatile grapplers.

Fans of the grappling side to MMA will be in for a treat when Farias (11-3) steps into the cage with Tanaka (14-3), a five-fight UFC veteran who compiled a 2-3 record in the promotion. Both men have at least 10 submission victories between them, and given the body of work between the two at this point in their careers, it seems unlikely that either man will be looking to keep the fight standing. Tanaka has historically taken long layoffs since leaving the UFC but Friday will mark the first time in five years he has fought twice within a 12-month period.

He will hope the uptick in activity aids him against Farias, a dangerous grappler with a knack for finishing the fight. He owns a pair of TKO victories and got a guillotine victory his last time out against Rodrigo de Moura at Cassino Fight 7, but he is at his best when on the back of his opponent. Five of Farias’ victories have come by way of rear naked choke, so it will be telling to see how his style contrasts to Tanaka’s with the latter fighter favoring a smothering top game. For as accomplished as a grappler as Farias is, he is yet to achieve a submission off his back. Power will also be in the favor of Farias but as long as Tanaka is able to dictate where the grappling exchanges take place he will be most likely to win a decision as six of his wins have come by way of points.

Friday’s co-main will see Askar Askar (13-2) taking on Diego Silva (14-7) in another bantamweight collision. Fans will recall Askar was scheduled to make his UFC debut 18 months ago against Cody Stamann, but an abnormality found in his heart derailed Askar’s UFC plans and saw him receive a quick release from the promotion.  The Palestinian would eventually receive medical clearance to return to the cage and has fought three times since then, compiling a 2-1 record. He’ll look to make it 3-1 against Silva and hope to earn another shot in the UFC off the back of a win over the tough Brazilian.

Askar has been susceptible to chin issues throughout his young career, having been knocked out in each of his two defeats. Conversely, Silva may not have a knockout on his record but could weaponize pace coming off a pair of five round bouts. The Fusion X-Cel product most recently dropped a split decision to recent UFC debutant Daniel Argueta, though Silva gave a generally good account of himself and had some positives to take away. He also went the distance with Andre Soukhamthath at CES 66, and will look to take the lessons learned from each bout into the fight with Askar, which should be winnable for a man who has traditionally been a gatekeeper for UFC hopefuls to come through the promotion.

LFA 138 can be viewed live on UFC Fight Pass on Friday, Aug. 5, beginning at 9 p.m./6 p.m. PT. Preliminary bouts are likely to be streamed on the promotion’s official Facebook page.

Nick Talavera def. Jota Ninomiya via Submission (RNC) at 2:42 of Round 1