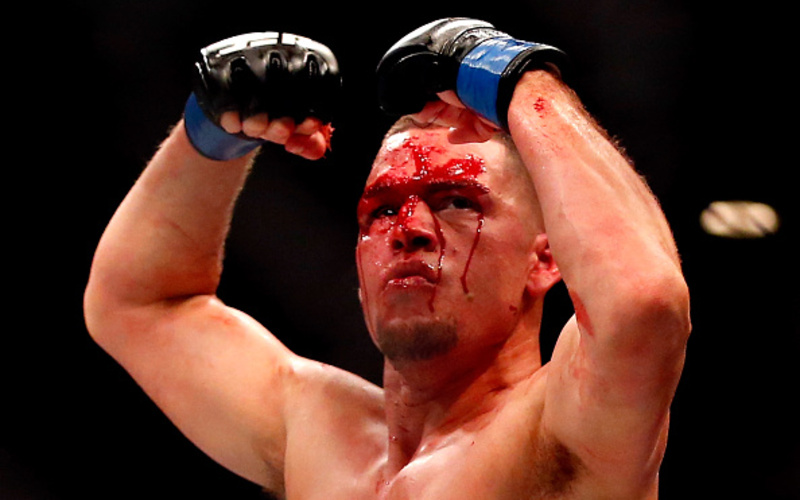 UFC 279 marks what many believe will be Nate Diaz‘s last ever UFC fight week. One of the biggest stars in recent times, Diaz has constantly entertained fans, media and the UFC brass alike. With some of the greatest one-liners, press conferences and actions in history, there is no doubt that Diaz will go down as a legend.

Having broken onto the scene as Nick Diaz‘s little brother, Nate quickly stepped out of his brother’s shadow and became iconic. Win or lose, Diaz has always come to fight, is never in a boring fight and will always put it on the line to gain victory.

We take a look at Nate Diaz’s top 5 most memorable moments in the UFC.

Many forget that Nate Diaz is an Ultimate Fighter winner and this is arguably because it came so long ago. Back in 2007, Diaz won The Ultimate Fighter Season 5 at lightweight. After starting his professional MMA career 5-2 with four fights in WEC, Diaz entered the TUF house on Team Jens Pulver. He finished all three of his TUF fights via submission before a disappointing TKO victory over Manny Gamburyan in the final due to a shoulder injury.

With the victory, Diaz gained a UFC contract and the rest is history. 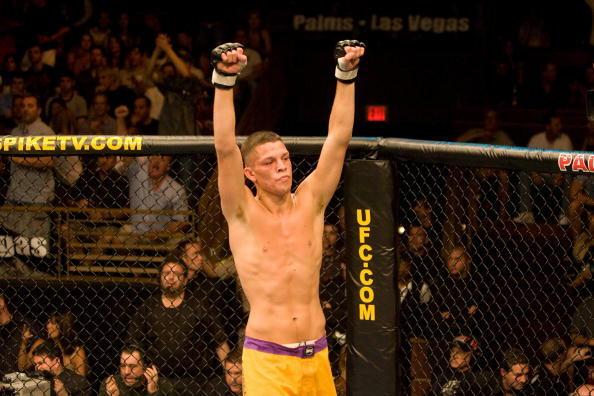 LAS VEGAS – JUNE 23: Nate Diaz def. Manny Gamburyan – Submission (injury) – :20 round 2 during The Ultimate Fighter 5 Finale at The Pearl at the Palms on June 23,2007 in Las Vegas, Nevada. (Photo by: Josh Hedges/Zuffa LLC via Getty Images)

We’re jumping from 2007 all the way to 2019 when Nate Diaz took on Jorge Masvidal for the famous ‘BMF’ belt. Following a callout from Diaz to Masvidal after a win over Anthony Pettis, the UFC decided to create a ‘Baddest Mother F**ker‘ belt and build a whole PPV card around the two men. Two of the biggest stars in the UFC at the time put on a show for the 20,000 + fans inside the historic Madison Square Garden.

This fight week had it all, from Masvidal dressing like Tony Montanna to walking out to the Scarface music with the legendary Roberto Duran made for huge headlines. Dwayne ‘The Rock’ Johnson was on deck to present the belt to the eventual winner, Masvidal.

Although the fight was stopped due to cuts suffered by Diaz, it was an exciting fight for as long as it lasted and Diaz showed his game nature and his notorious ‘never give up’ attitude. 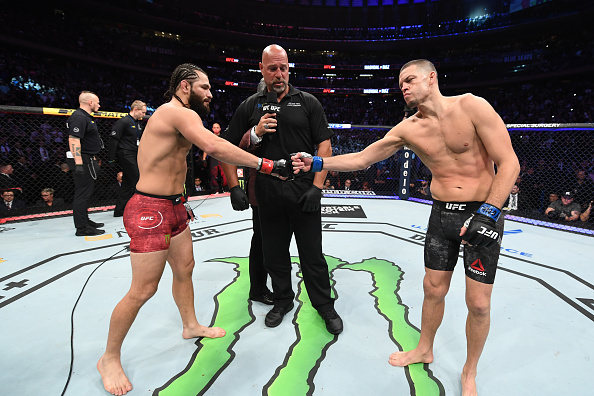 After putting on a clinic against Michael Johnson at UFC on Fox 17, Diaz took to the mic and produced one of the best post-fight speeches we’ve ever seen. Heading into the bout, Johnson had won four of his last five bouts and Diaz was 1-3 in his last four. Johnson was confident heading into the fight, however, Diaz dampened any confidence he had.

After the victory, Diaz rocked the mic and called out Conor McGregor, a man who at the time was at the pinnacle of the sport. He had just captured the featherweight title in 14 seconds with a knockout of Jose Aldo and was the UFC’s biggest star. Using his post-fight speech Diaz called out the Irishman.

“Conor McGregor, you’re taking everything I worked for, motherf*****. I’m gonna fight your f****** ass. You know what’s the real fight, what’s the real money fight, me, not these clowns that you already punked at the press conference. Ain’t nobody wants to see that. You know you can beat them already. It’s an easy fight. You want the real s**, [I’m] right here.”

Truly iconic and a career-defining moment for Diaz as we know that happened following this call out.

#OnThisDay in 2015: @NateDiaz209 beat Michael Johnson, took the mic and the rest is history…

2 – Flipping off and Flexing whilst locking in a Triangle

Taking place at UFC Fight Night 13, Diaz locked in a memorable submission and one of which really got his personality across. It was the first time that we really saw Diaz’s gangster personality come across to the fans. After being dominated in the first round against Kurt Pellegrino, the second round seemed to be trending in the same way. He was picked up in a single leg by Pellegrino and slammed to the mat. Immediately upon landing on his back, he locked in a triangle choke and knew he had his man.

He threw his hands up in the air before his opponent had even tapped and then proceeded to throw up the double middle fingers to the sky before flexing and forcing Pellegrino to tap.

Not only did this show just how dangerous Diaz can be on the ground but his personality also came across and it really showed how dangerous he is at all times throughout the fight. 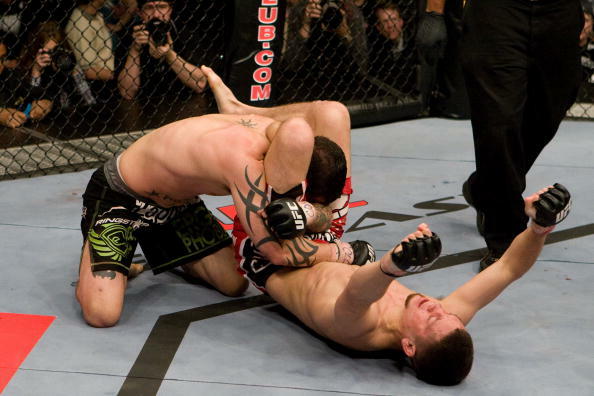 Is anyone really surprised, motherf***ers? Nate Diaz’s most iconic moment in the UFC came in the biggest fight in his career and the biggest win of his career.

Following the post-Michael Johnson call-out, Diaz stepped in on short notice to face Conor McGregor in the UFC 196 headliner. The build-up to the fight was entertaining, with Diaz and McGregor constantly going back and forth, taking jabs at each other and providing fans with a great fight week.

The first round was tough for Diaz. McGregor found his range early, hurt Diaz, cut him and looked on his way to yet another knockout. Starting the second round, McGregor was confident and rightfully so after such a dominant first five minutes. The worst came true for McGregor, however. His gas tank appeared to empty within the first two minutes of the second round. Diaz used his durability in his favour. He was there to be hit often by McGregor and the Irishman did just that, however, emptied the tank in search of the knockout. When Diaz didn’t go away, he took over.

He began landing on McGregor with constant jabs, landed a one-two that rocked McGregor, landed his famous ‘Stockton slap’ and poured on the pressure. This led to Mcgregor shooting for a lazy takedown, to which Diaz sprawled out, took the Irishman’s back and choked him out.

Not only did the win itself shoot him into superstardom, but the post-fight speech went viral. Following Joe Rogan stating he just shook up the world, Diaz stated “I’m not surprised motherf***ers“. Iconic and never to be forgotten.

"I'm not surprised!" 🤬#OnThisDay six years ago, @NateDiaz209 gave us one of the most iconic moments in UFC history! pic.twitter.com/40ZEf9GFTB