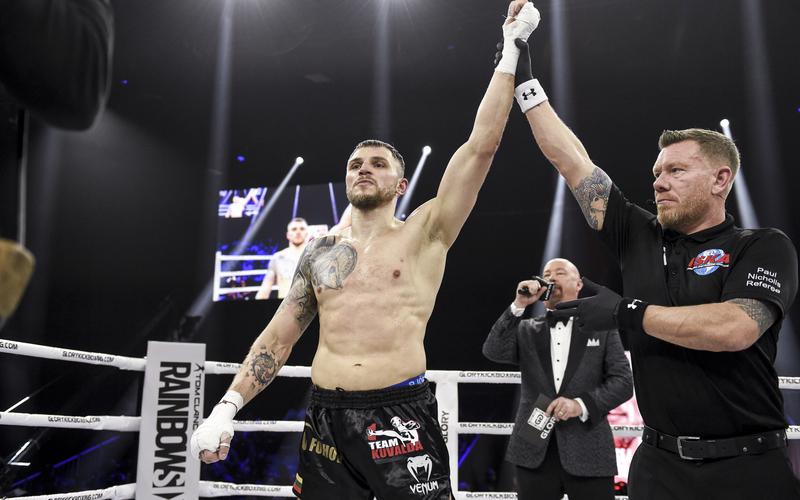 Lithuanian kickboxer Sergej Maslobojev is looking to walk away a world champion at GLORY Collision 4. On October 8, “Kuvalda” will look to extend his incredible 11-fight win streak. Maslobojev will be facing the Moroccan striker Tarik Khbabez for the vacant Glory Light Heavyweight Championship.

Ahead of this championship showdown at GLORY Collision 4, Maslobojev sits down to discuss this match with MMA Sucka.

The Lithuanian-born fighter has respect for his upcoming opponent Khbabez, but will still look to finish him. Maslobojev explained that it’s not so much a matter of power, but instead a game of tactics. He said:

“He’s coming down from heavyweight so my physical power, I have really strong punches but I don’t think that I’m gonna surprise him because. He took punches from the really big boys … But the movement, the fight IQ that I have, I think he [hasn’t] seen nothing like this before …Maybe I will try to outplay him and when I have the chance I will give him a little surprise from Lithuania.”

After decades in combat sports, Sergej Maslobojev feels like he is at the apex of his career. He has professional boxing experience, MMA, and kickboxing fights. Fighting for a throne, in a stadium event featuring Badr Hari and Alistair Overeem, the 35-year-old fighter feels that he’s made it. The Lithuanian kickboxer explained:

“I started to do kickboxing actually late when I was 18. And back then I watched them and I said whoa those guys are just crazy. Would be great to have an opportunity one day just to watch them fight live or, take a photo, you know. I never thought I could be one of them on the same card … This is life. And that’s why I always, at my seminars, I say that life is a beautiful thing.”

Maslobojev works with many people in his home nation of Lithuania. In addition to being a proud father and kickboxer, he runs seminars with prisoners, drug addicts, and the military. He explained that in his youth he was a bit of a hooligan. But the fighter realized that the energy he gave out, he received back. He began making adjustments in his life, and Maslobojev, explains:

“I started to notice the good energy, good vibes. Good people started to come into my life. I understood the formula so now I think that my goal is to spread that.”

GLORY Collision 4 will take place on October 8 and be headlined by a heavyweight trilogy between Badr Hari and Alistair Overeem. This kickboxing event is set to feature several world championship bouts. See below for world title fights: