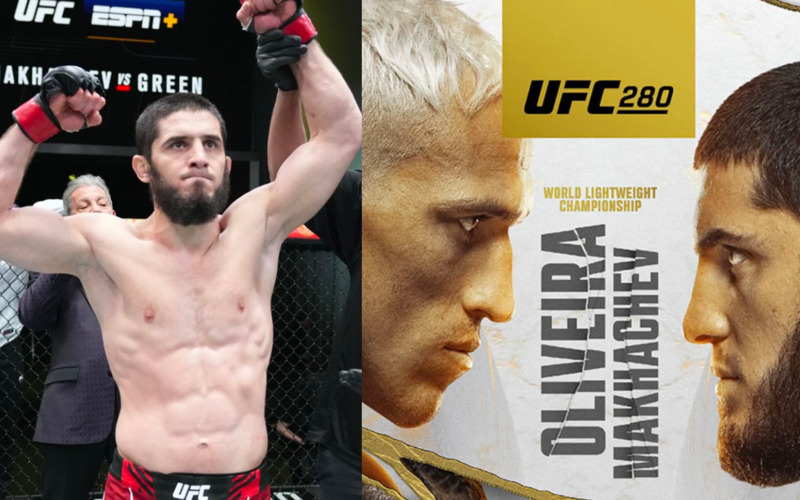 One of the best PPV cards in recent times is headlined by a banger of a lightweight title fight between Charles Oliveira and Islam Makhachev. As it stands, the belt is vacant after the Brazillian lost his strap on the scale last time out. Whether Makhachev deserves a lightweight title opportunity is certainly debatable, however, he’s a dangerous operator. Sitting at #4 in the lightweight rankings, Makhachev holds a 22-1 record, including four straight finishes.

A lot of the debate surrounds Makhachev’s game against Charles Oliveria’s. Makhachev is a wrestling heavy, ground and pound specialist, whereas ‘Do Bronx’ is a submission specialist, holding the UFC record for the number of submission finishes. How will this one play out? All will be revealed as we take a look at Islam Makhachev’s keys to victory ahead of this huge fight.

How Does Islam Makhachev bring the belt back to Dagestan?

For Makhachev, it’s important not to just settle for the wrestling game straight from the off. He’s suggested that he might look to make reads in the first round, before taking over in the second round and finishing it in the third.

First round warm up, second round drag him to deep water, third round get business done Inshallah ✅ Can’t wait for Oct 22 👊🏼 @ufc https://t.co/WaLUK0Ngtz

This is certainly a risky strategy as Oliveria is a notoriously fast starter. He’s put a pace on his last three opponents in the first round, forcing them to work and Makhachev is going to have to deal with this in Abu Dhabi. Without a doubt a way that Makhachev can keep Oliveria off him, stunt his forward pressure and look to hurt him is to land the lead hook.

We’ve seen that Oliveira has been susceptible to the lead hook in a number of his fights. Against Dustin Porier, Oliveria was dropped twice in the first round, both of which came as a result of the lead hook. We can see below how Poirier extends his combination by lands two straights, followed by a lead hook which drops the then champion. It is worth noting that the American is a southpaw, so it’s a lead right, rather than a lead left that landed, however, the principle behind the strike remains a weakness in Oliveira’s game.

We also saw this weakness against Justin Gaethje. The American looked to land (with immense power) during their fight. He had landed the left hook twice prior to the below example and was clearly loading up on the strike, seeing it as a way to hurt Oliveira. The example shows how Gaethje also throws a straight followed by the lead hook. Oliveria looks to shoulder roll away from the straight, which meads to him to moving into the lead hook at pace.

Oliveira also looks to attack in bursts, freely moving in and out of range in order to set himself to land a variety of shots. This means that he often rushes into range, leading him susceptible to being countered with a check lead hook. In his first main event slot against Thiago Moises, Makhachev did just this. As Moises rushed in, Makhachev set himself and landed a stinging lead check left hook.

Malhachev’s lead hand is constantly working and is extremely active. It is either parrying the lead hand of his opponent, throwing out jabs or simply keeping it moving to distract opponents. This could work in his favour massively against the Brazillian on Saturday.

Don’t be Afraid of the takedown

Despite the former champion’s ground game and submission threat, Islam Makhachev cannot be afraid of taking the fight to the ground. We know that he’s a wrestler at heart, he lands an average of 3.41 takedowns per 15 minutes with an accuracy of 65%. He can’t drift away from what got him to the dance, what essentially got him the opportunity.

We know that Oliveira, despite what the stats might show, can be vulnerable on the ground. He’s been finished on the ground four times, three via submission and once via brutal ground and pound against Paul Felder. The Felder fight is a fight where Makhachev can take a lot of inspiration as to how to handle ‘Do Bronx’ on the ground.

Felder was happy to sit in the guard of the Brazillian and avoid his BJJ by simply throwing constant strikes, forcing Oliveira to cover up, rather than looking for offence. He was able to pin Oliveira up against the fence, which again limited Oliveira’s offence off his back. Here, we can see that Felder is limiting the ‘get out zones’ (zones in which Oliveira can move into open space) by forcing Oliveira’s head up towards the fence. His only option is to either give up his back or move towards his right but Felder prevented him doing so. 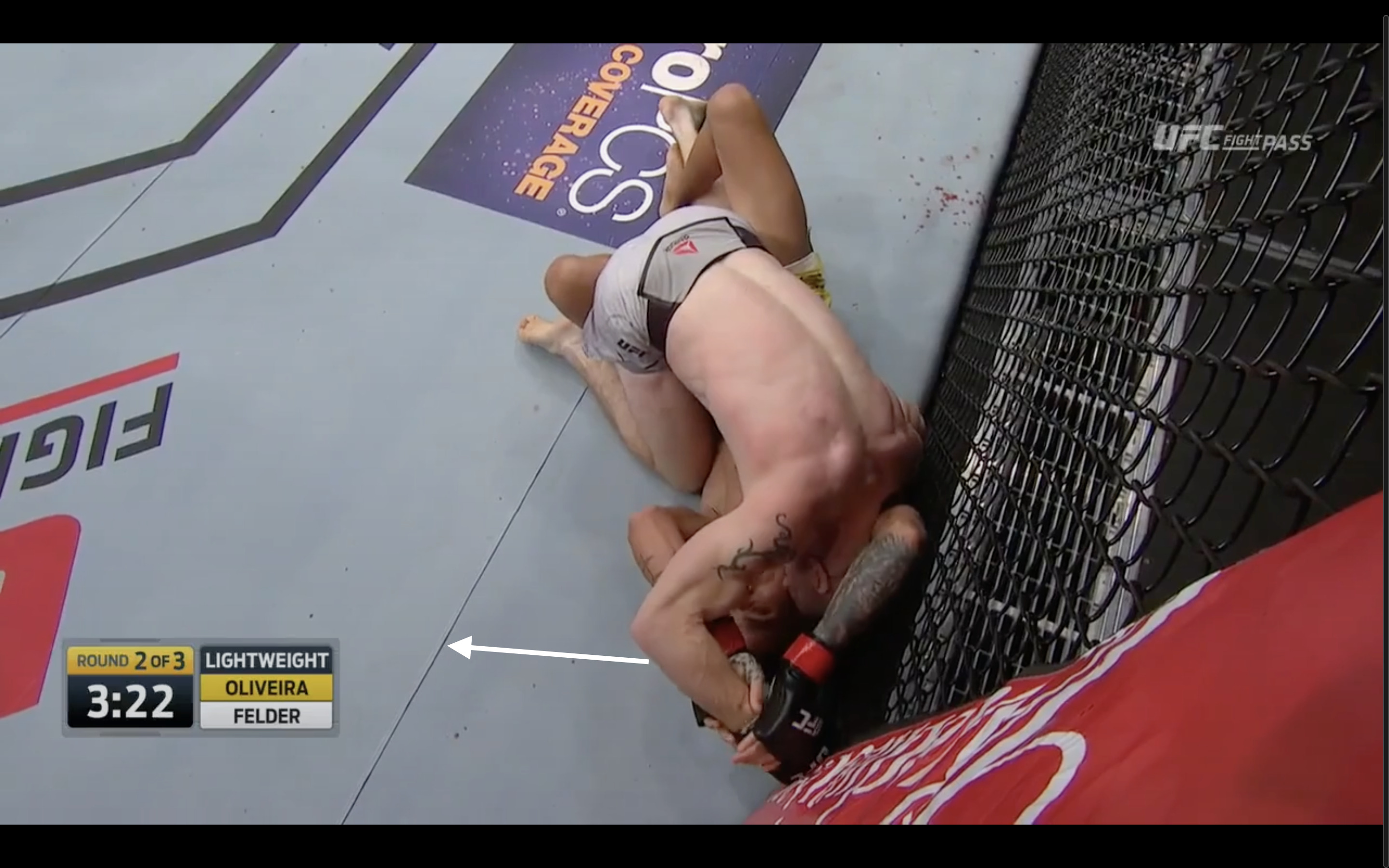 Likewise, Oliveria was subbed by both Anthony Pettis and Ricardo Lamas in back-to-back fights whilst competing down at 145lbs. The Lamas fight is also a fight which Makhachev can take inspiration from. Having been controlled by Lamas on the ground, Oliveira looked to wrestle back to his feet, however, was caught in a guillotine and consequently tapped.

Makhachev has quality takedowns, they’re very reactive and quick when he commits to them. Against Dan Hooker, the Aussie threw a leg kick to which Makhachev reacted instantly,  by throwing a lead overhand and fell into a takedown, snatching the legs of Hooker, which lead to the beginning of the end. A kimura eventually ended things. The example below shows the takedown and we can see just how quickly Makhachev is able to gain control of Hooker’s body with a bodylock around his waist.

Dating back to 2016, Makhachev fought Chris Wade. Against Wade, in the second round, Makhachev reacted to a Wade flurry by level-changing, catching Wade flat-footed and squared up and grounded the fight. Wade did momentarily seem to lock in a guillotine, however, Makhachev managed to fight 0ut of it. If he does this against Oliveira, the Brazillian is more than likely going to be able to finish the choke. Makhachev eventually went on to get his hand raised, however, it’s worth noting that he’s improved his takedowns massively and doesn’t put himself in danger in recent times.

Despite his wrestling credentials, Makhachev has deceivingly good kicks. The Dagestan man often doesn’t have to worry about being taken down so can throw high kicks without much concern. Oliveira has a takedown accuracy of 53% but has only landed one in his last three fights, despite attempting nine. This would suggest that Makhachev doesn’t have to worry too much about the takedown coming back at him during the fight.

Makhachev isn’t a huge low kicker, however, he has to start with the low kicks in order to keep Oliveira guessing. Oliveira is notorious for his low-kick defence, choosing not to check them, but rather completely move his leg up and out of the way. The most obvious example of this was against Gaethje. Gaethje constantly threw the calf kick against Oliveira forcing him to move out of the way of the strike. We can see an example below.

The first-time title challenger should certainly look to mix in high kicks between low-leg attacks. Against Nik Lentz, Makhachev utilised high kicks very well, forcing the American to cover up, rather than shoot for counters. He mixed it up between kicks up the middle and more traditional, roundhouse kicks.

Against Bobby Green, Makhachev opened up with a high kick, forcing Green to react and consider that it might come again later on in the fight. He set the trap early and kept his opponent thinking throughout.

If Makhachev can do this, he can keep Oliveira guessing too. The Brazillian won’t know if he’s going high or low. For Oliveira to lift his leg up and out of the way in anticipation of the potential low-kick, it could leave him susceptible to either being off balance or even susceptible to the takedown if Makhachev can time Oliviera when he lands his foot back on the floor after a slip.

Whatever happens in this one, whether it goes in the favour of the former champion, Oliveira or Makhachev brings the belt home to Dagestan, this one of guaranteed fireworks in what promises to be the biggest fight weeks in history.