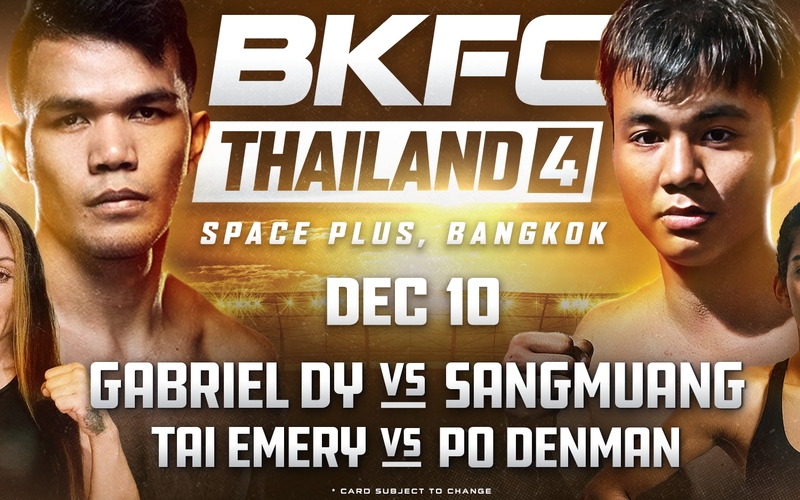 BKFC Asia, formerly known as BKFC Thailand, celebrates its one-year anniversary tonight with BKFC Thailand 4, which is set to go down live from Space Plus in Bangkok.

The main event will take place at featherweight, as UFC veteran Rolando Gabriel Dy makes his promotional debut across from Apisit Sangmuang. The son of former boxing world champion Rolando Navarette, Dy’s boxing base and nonstop pressure earned him a number of wins and fans in MMA, but is ready to step into the bare-knuckle ring to put his skills to the test. In Sangmuang, he will face a veteran of multiple striking arts, having over eighty wins in Muay Thai and holding a 10-3-1 boxing record.

Many eyes will be on the co-main event, as viral sensation Tai Emery will look to follow up on her performance at BKFC Thailand 3, where she picked up a dominant first-round stoppage, against Po Denman. The former American football star Emery made waves after celebrating her victory by lifting her shirt to reveal one of her breasts, and has promised to do so again should she get past Denman. That will be no easy out, however, as Denman is 17-1-1 in boxing, undefeated in kickboxing, and the betting favorite entering the night.

The rest of the card is filled with fighters from around the world, with 12 countries being represented throughout. Some fighters are returning to BKFC action, like BKFC Thailand 1‘s Victor Booty and Sarun Srioumboo, as well as BKFC Thailand 3’s Frankke Srisang.

MMA Sucka has fight fans covered with BKFC Thailand 4 results, with the card set to start woth the preliminary card at 4:30am ET/1:30am PT, followed by the main card at 5:30am ET/2:30am PT, all on the BKFC app.

Rolando Gabriel Dy def. Apisit Sangmuang via KO (Hooks) at 0:42 of Round 1

Gilbert Patrocinio def. Channarong Injampa via KO (Right Straight) at 1:23 of Round 2

Gustaf Cedermalm def. Alex Castro via TKO (Referee Stoppage) at 1:50 of Round 4

Sarun Srioumboo def. Victor Booty via TKO (Left Straight) at 1:10 of Round 2

Thearith Ouch def. Anubhav Kumar Verma via TKO (Referee Stoppage) at 0:56 of Round 3