Five Fights to Make After UFC 282 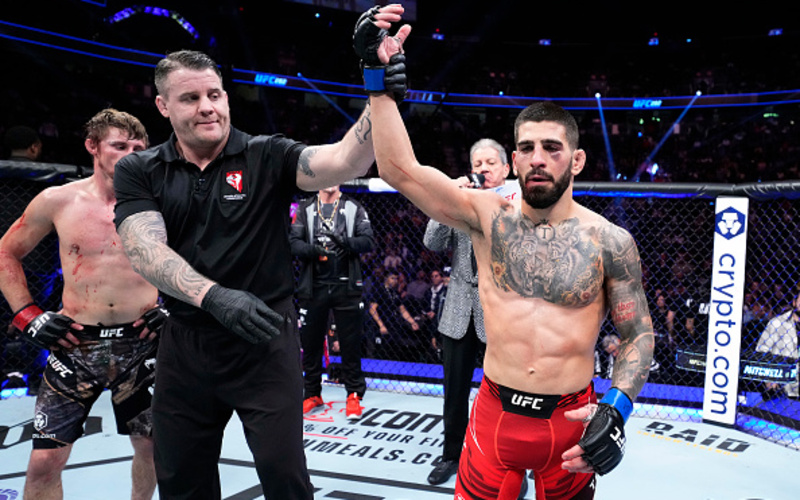 All was well at UFC 282 leading in to the final two fights of the night.

Both the co-main and main event from Saturday’s venue at the T-Mobile Arena in Las Vegas were met with unfortunate controversy from numerous fans and personnel. Paddy Pimblett took a unanimous decision over Jared Gordon while the vacant promotional light heavyweight championship between Jan Blachowicz and Magomed Ankalaev was contested to a split draw. The debatable decisions ended what had been a night that was nearly historic having started incredibly strong with ten straight stoppages; one short of tying the record for most in a single UFC event.

The final pay-per-view of 2022 did have its memorable moments.

170-pounder Santiago Ponzinibbio secured a comeback knockout avoiding three straight losses in the UFC. Fast-rising stars delivered statements as middleweight Dricus du Plessis and featherweight Ilia Topuria made the most against their respected opponents. Jairzinho Rozenstruik only spent 23 seconds in the octagon, his first win since a main event knockout in June of last year. 18-year-old Raul Rosas Jr. became the youngest fighter and youngest winner in promotional history with his first-round submission over Jay Perrin. Another youthful talent, 2022 Contender Series standout Cameron Saaiman, opened the event with a second-round knockout continuing on his undefeated run.

What is next for these talented competitors? With post-event chatter continuing on these couple days later, let us take a look at five fights to make after UFC 282.

After 15 minutes had passed, it appeared lightweight Jared Gordon had done enough to win his second straight fight of 2022. All three judges, however, ruled it different as Paddy Pimblett managed to secure the unanimous decision victory. According to MMADecisions, 23 of 24 media members and over 90% of fans scored the bout in favor of Gordon.

Nevertheless, Pimblett walked away with his fourth straight win in the UFC and his sixth in-a-row since a unanimous decision loss for the vacant Cage Warriors lightweight championship to Soren Bak. The year for the Barstool Sports athlete was his third victory having rear-naked choke submissions over Rodrigo Vargas in March and Jordan Leavitt in July.

Another fighter with two wins in 2022 is Matt Frevola. Two first-round knockouts over Genaro Valdez and Ottman Azaitar put “The Steamrolla” back into a solid spot in the division. Frevola took to Twitter after Pimblett’s post-fight interview which garnered the attention of many fans. A pay-per-view opener or “Fight Night” main card would be just right.

Rounds one and two did not go to plan for Argentina’s Santiago Ponzinibbio. After a short pep talk between the second and third, the dangerous striker let his hands fly connecting and finishing off the four-fight run of Alex Morono. The contest was lucky to happen as Morono replaced an injured Robbie Lawler with less than a week’s notice. It was Ponzinibbio’s 16th professional knockout win and his first since a fourth-round stoppage in November of 2018 over Neil Magny.

An impressive career turnaround has come in Max Griffin. A 3-6 tenured run has been followed with four wins in his last five outings including decisions over veterans Carlos Condit and Tim Means. The 37-year-old brings a diverse striking game with a black belt in both kickboxing and Bok Fu.

Pairing Ponzinibbio and Griffin would be the perfect standup fight as the two look for a performance to be enough for a top fifteen spot at 170 pounds.

SANTIAGO PONZINIBBIO COMES ALL THE WAY BACK 😱 #UFC282 pic.twitter.com/T3wcLg2kUt

Both Jan Blachowicz and Magomed Ankalaev had moments of success in their battle for the UFC light heavyweight title. Former divisional champion Blachowicz utilized leg kicks as his primary weapon with a majority of damage done between rounds two and three. Ankalaev, however, saw his biggest moments come in the championship rounds seeing a dominant fifth using ground-and-pound from top control. With scorecards from the judges reading 48-47 Blachowicz, 48-46 Ankalaev, and 47-47, the fight was declared only the fifth UFC championship to be ruled as a draw.

During the event’s post-fight press conference, UFC President Dana White announced that Glover Teixeira and Jamahal Hill will meet for the vacant light heavyweight championship at UFC 283 in January. This would mean that neither Ankalaev and Blachowicz are in position for a title fight any time soon.

Having a rematch between the two would keep the rest of the division’s top ten moving. Although it is likely not to happen again, we can (hopefully) rest assured the final outcome would be completely different. Anthony Smith was supposed to fight Hill at UFC Fight Night 221 in March, and if the UFC wants to avoid a rematch after Saturday night’s result, consider Blachowicz as the replacement. Ankalaev fought Smith in July this year, so maybe pair him against Aleksandar Rakic.

Did you have this fight as a draw? 👀 #UFC282 pic.twitter.com/87gymkFfjt

A contender has rightfully emerged in the featherweight division. Ilia Topuria showed a well-rounded game mixing in various combinations and a unique takedown in the second round that quickly lead to a fight-ending arm-triangle choke over previously-undefeated Bryce Mitchell. The former Cage Warriors bantamweight champion remained undefeated with the 13th professional win to his name since April of 2015 and the twelfth by way of stoppage (four via KO/TKO, eight via SUB).

Topuria is due for a five-round, main event appearance next as he continues to creep up the divisional ladder. A likely opponent that brings a dangerous arsenal is that of South Korea’s Chan Sung Jung. His last octagon appearance came in April where he suffered a one-sided knockout loss for the featherweight title against Alexander Volkanovski. The long-time veteran and fan-favorite has been in some of the most memorable fights in MMA history including his two meetings in WEC with Leonard Garcia and his thrilling 2012 victory over Dustin Poirier.

Pairing Topuria and Sung Jung is the perfect test for one another at different points in their careers while having “Fight of the Year” potential written all over it.

South Africa’s Dricus du Plessis was full steam ahead on Saturday night. Round one saw a dominant start turn almost fight-ending in the final seconds with Till ending up in top control. A back-and-forth second round followed by a takedown midway through round three would see Till give up his back and neck before du Plessis finishing the bout by rear-naked choke. The win was his sixth in-a-row since losing the KSW welterweight championship in an October of 2018 rematch with Roberto Soldic.

A paced approach from du Plessis could pose dangerous for every middleweight in the division. There are some options to explore for the rising star, but a very plausible match would be against Marvin Vettori. The former middleweight title challenger is looking to rebound after a three-round decision loss to Robert Whittaker in September while searching for his first win since Paulo Costa in October of 2021.

Have this duo tango in a five-round main event sometime around April or May.