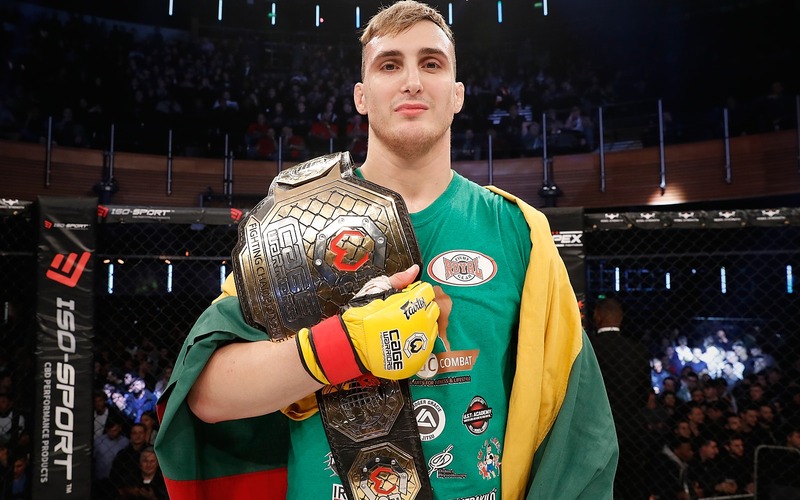 Bukauskas, who got into the UFC off a stint as the Cage Warriors light heavyweight champion, is set to fight Campbell for the vacant title.

The Lithuanian-born Englishman called Campbell a “credible” opponent, acknowledging that his foe is undefeated in his past four fights.

“He’s very explosive and very powerful,” Bukauskas told MMASucka. “He’s played American football in Division I. I know what the athletes are like in America having been to high school there for two years. Like I said, very athletic.”

Bukauskas said Campbell is “quite basic” in MMA skills, however.

“He’s got an alright bit of wrestling and heavy hands, but these are quite normal in terms of the light heavyweight division. I feel that my skill sets are much better than his and I’ll be able to dismantle him. He’s a good opponent, he’s a credible opponent, but he’s a very beatable opponent. I’ll show what I’m all about on fight night. I’m going to take him out. I’m going to finish him without a doubt.”

Bukauskas first won the Cage Warriors title with a TKO win over Marthin Hamlet in June 2019. He defended it once before getting the call to the UFC.

He went 1-3 in the promotion with a win over Andreas Michailidis and losses to Jimmy Crute, Michal Oleksiejczuk and Khalil Rountree, all of whom are Octagon mainstays.

Bukauskas was released following the Rountree loss, a fight in which he suffered knee damage after Rountree landed a side kick to the knee. Bukauskas underwent knee surgery and found himself a free agent. He said there was a “buffer” in finding a promotion to sign with.

“The initial conversations with my manager was, obviously, I wanted to go back to the UFC,” Bukauskas said. “Obviously, I’m still young and I’ve still got time to make it back.”

He and his manager, Jason House of Iridium Sports Agency, searched for a new home for “The Baltic Gladiator.” A couple of options from other promotions fell through for various reasons.

Bukauskas, who suffered the injury in September 2021, said he was ready to fight the following May. He would not compete again until November, however.

Eventually, Bukauskas decided he would return to his roots and the promotion that got him to the UFC: Cage Warriors.

“Having fought there before, having won the belt before, why not go back there to familiar grounds and repeat the glory that I had there once before?” Bukauskas said.

Bukauskas set himself up for a title shot when he defeated Lee Chadwick via unanimous decision on Nov. 4. He did not waste any time in signing to fight Campbell for the vacant belt.

Bukauskas believes winning the Cage Warriors light heavyweight title again would put him “firmly in the history books” of the promotion.

“Nicolas Dalby and Dan Hardy are the only two athletes who have vacated the belt and won it back again,” Bukauskas said. “This would put me in a a very honorable line of amazing athletes To be put alongside those really high-level names would be an absolute honor for me.”

“It’s an absolutely amazing thing all the opportunities that will come up once this belt is taken.”

“Of course, I’m going to get the job done on New Year’s Eve to make that all happen.”

“I plan to knock him out. Just simple and plain. I plan to knock him out spectacularly. I know commentators have said before that, ‘oh, he puts a lot of pressure on himself to finish,’ but I believe I’m an extraordinary fighter. I need to go out there and show it. I need to take risks. I just want to put on a show for the fans and make it one hell of a night. One hell of a way to end out the year. I’m going to end the year out with a bang, and I am going to finish Campbell by knockout.”

Bukauskas, should he defeat Campbell, does not know yet what his next move will be. While a call back to the UFC ASAP is his goal, he said he would not dismiss other promotions like Bellator, ONE Championship or the Professional Fighters League. He still feels he has a lot to give in the sport, after all.

“Of course, you can’t just completely dismiss all the other options that may potentially be on the table,” he said. “Obviously, it’s my number one goal to get back to the UFC, and I have my head completely straight on doing so. Like I said, I’ll only be 29 in February. There are other athletes before who have done it. They’ve come back [to the UFC] even in their 30s, or there are guys coming that are 29, 30. For me, it would be amazing obviously to do that. But of course, I’ll never turn away other options. If there’s something suited toward me, I’ll take it. Of course, my heart is still very set on the UFC. But I would never completely write off any other options.”

Bukauskas and Campbell are set to compete on the main card of Cage Warriors 148 on the afternoon of Dec. 31. The card is set to air on UFC Fight Pass. The event will go down from the Indigo at the O2 in London, England.