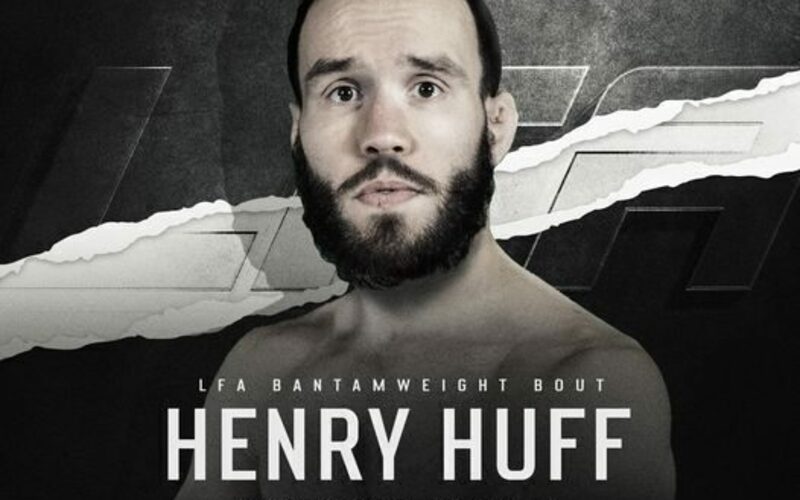 With war at the gates, all is calm for Henry Huff. The Team Colón bantamweight is ready for the battle as he looks to open the LFA 150 main card on January 13th against Quang Le.

Henry Huff: Humble and War Ready Ahead of LFA 150

“Training camp has been good. No fighter is ever going to tell you it’s been a bad camp. “, Huff told MMASucka. “I started off my career on a hot streak, going 3-0. I’ve fallen off my last couple fights and now I’m 4-3.”

Huff explained that he plans to get back on track at LFA 150 and that all starts in training camp.

“[The losses] are the motivation I needed. I’m motivated and have worked hard in camp. I work with a lot of good guys. I love to work with Payton Brezinski. I just put in some rounds with Eddie Wineland.”

Huff noted that has no issues staying out of the cookie jar, or out of the Christmas fudge, or out of the New Years’ ham—you get the point. “When I cut, I crave salads and healthy foods. Its crazy. If I could go for anything right now, it would be a nice, juicy burger.”

When asked about the game plan for the fight, the Hoosier state native told MMASucka, “I’m just gonna get in there and fight. I have a game plan, but what if that fails? You need to be able to make that adjustment and that’s not what I’ve been able to do my last couple fights. During camp, I’ve put myself in bad positions—difficult situations. I’ve started rounds with guys on my back with a choke sinked in. I’m going to have to adapt to win this fight.” Huff continued, “The first couple shots are gonna dictate the way this goes. How is he gonna respond if I hit him with a really hard shot?”

“For the longest time, I’ve wanted to make it to the UFC.” Huff told MMASucka, “I’ve wanted that since a kid.”

But Huff’s goals are a little bit different now.

Henry Huff will face Quang Le on January 13th at LFA 150. The event will be aired live on UFC Fight Pass.