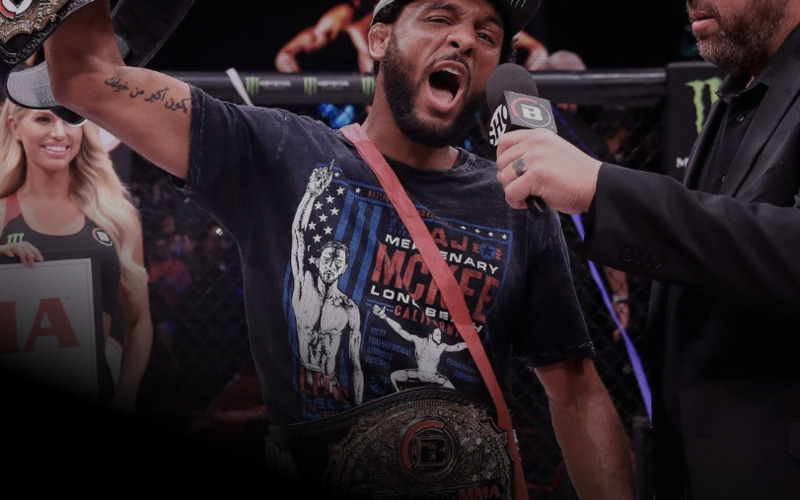 Bellator featherweight A.J. McKee agreed to a multi-year contract extension with the promotion on Tuesday, per a press release.

McKee re-signs with Bellator as a true homegrown talent as one of the promotions fighters to have his entire MMA career take place under their banner. The former Bellator Featherweight World Grand Prix tournament champion is coming off an impressive win on New Year’s Eve against Roberto de Souza in an impressive unanimous decision win to give Bellator a clean sweep in the Bellator versus Rizin event at the Saitama Super Arena in Japan.

Bellator President Scott Coker said in their press release that “our top priority has always been to cultivate talent from the ground up, and with AJ [McKee] I can proudly say we have witnessed this young man blossom into a bonafide superstar in the Bellator cage…”

“It’s also our priority to retain top talent, and with AJ entering the prime of his career, it was important to make sure he continued representing the Bellator brand, much like he did recently in Japan, for the foreseeable future. I am looking forward to AJ’s next challenge, an appearance in our 2023 Bellator Lightweight World Grand Prix, which showcases the best 155-pounders in the world.”

McKee will now be featured as one of the eight entrants to the 2023 Bellator Lightweight World Grand Prix where he will have a chance to become a two-time Bellator World Grand Prix Champion, a first occurrence potentially for the promotion’s history.

He won the aforementioned featherweight grand prix back in 2021 by defeating Bellator legend Patricio Pitbull via submission in round one. He faced several of the promotions best in their deepest division at the time such as Georgi Karakhanyan, Derek Campos, and Darrion Caldwell and finished all of them. He achieved all this while he and the promotion navigated a worldwide pandemic in the process.

He holds Bellator records for most consecutive victories (18), submission wins at featherweight (7), and stoppages at featherweight (13). He is tied for first in promotional record books for total finishes (13) and second for featherweight knockouts (6). In 2019, ESPN named McKee MMA’s top fighter under 25 and he followed that up in 2020 with the consensus “Submission of the Year” for his first-round neck crank, better known to many as the “McKee-o-tine” of Darrion Caldwell.

Bellator starts the year by re-signing its most promising star and can now look ahead to hosting Bellator 290 when Ryan Bader faces Fedor Emelianenko.