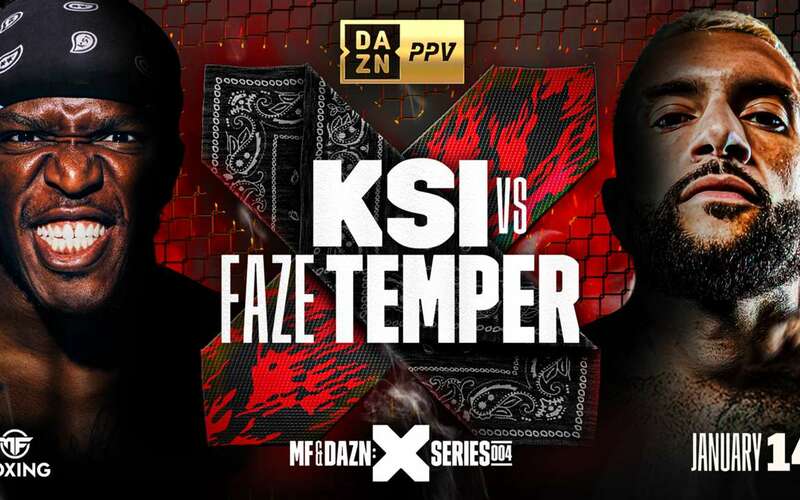 Days after inking a rights deal with DAZN that will keep them on the streaming platform for the next half-decade, Misfits Boxing will return today with MF & DAZN: X Series 004. The main event will see British YouTuber and social media influencer JJ Olatunji, better known as KSI, take on fellow influencer FaZe Temperrr.

The fight, which is scheduled for six rounds in the cruiserweight division, will emanate from the OVO Arena in Wembley, London, England.

Saturday’s main event underwent a massive change less than two weeks before the day of the fight. Mixed martial artist and Brazilian jiu-jitsu black belt Dillon Danis , KSI’s original opponent, pulled out of the fight for reasons that are still not totally clear. Danis gave several reasons for the withdrawal, with the main reason seemingly that Danis was unable to find a coach to prepare him for the fight. Danis initially angled for the KSI fight by triggering an altercation between the two at the Misfits 003 press conference.

With Danis in the rearview mirror, KSI now turns his attention to FaZe Temperrr, the Brazilian-born influencer. Temperrr, a professional gamer, holds a 2-1 record in boxing. He first won his first bout against King Kenny in controversial fashion, initially losing on the judges’ scorecards before getting the results overturned by way of an appeal and rescore. He then took his first knockout loss against fellow YouTuber Slim Albaher back in August before knocking out Overtflow in November. He will have approximately a three-inch height advantage over KSI and was originally scheduled to take on a mystery opponent in the light heavyweight division. Instead, BDave will be the one to welcome the mystery opponent to Misfits Boxing.

As for KSI, he is coming off consecutive knockouts over Swarmz and Luis Alcarez Pineda at the Misfits-promoted KSI 2 Fights 1 Night. Though one of the opponents claimed to be a professional boxer, both appeared to be overmatched. He also owns a victory over Logan Paul, picking up a controversial decision victory over his former enemy in his professional debut back in 2019. Since then, KSI has fought in strictly exhibition fights though he is yet to taste defeat in his young career. Additionally, KSI’s Misfits cruiserweight belt will be on the line. Meanwhile, promotional light heavyweight champion Slim will defend his title against British DJ Tom Zanetti in the co-main event of the seven-fight card.

JJ “KSI” Olatunji def. FaZe Temperrr via Knockout at 2:19 of Round 1 — For the Misfits Cruiserweight Championship

Swarmz def. Ryan Taylor via Doctor Stoppage in Round 1