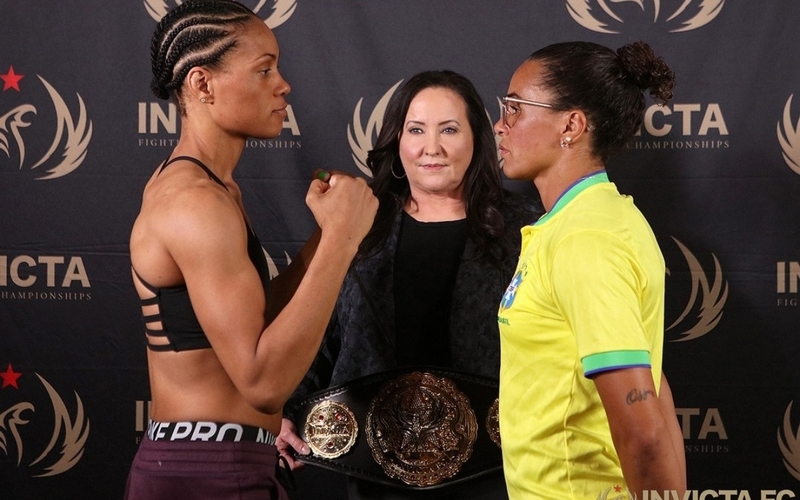 Invicta Fighting Championships, MMA’s premier women’s-only promotion, will open 2023 with a bang. Wednesday evening’s Invicta FC 51 will be headlined by a bantamweight championship fight between defending champion Taneisha Tennant and and challenger Talita Bernardo. The flyweight championship will also be up for grabs when Kristina Williams takes on Ketlen Souza.

If fight fans recognize the name Taneisha Tennant, it is probably from her 145-pound fight with former professional boxer Danyelle Wolf on Dana White’s Contender Series back in 2020. Fighting up a weight class with just three fights of professional experience up to that point, Tennant gave a good account of herself, flashing an all-around mixed martial arts game that bode well for her future in the sport. Two years later, Tennant became the Invicta FC bantamweight champion with a split decision victory over Olga Rubin, and is now set to make her first title defense against Brazil’s Bernardo. The New York-native should threaten at all levels and is yet to be finished in her MMA career.

Bernardo will present a unique challenge relative to Tennant’s recent opponent in that she is a four-fight UFC veteran. Bernardo went 1-3 in her first run in the UFC, with her only win coming over Canada’s Sarah Moras. However, two of her three defeats came at the hands of potential bantamweight title challenger Irene Aldana and flyweight contender Viviane Araujo, and she has gone a perfect 3-0 since her release from the promotion with second-round submissions in each of her last two wins. Her first post-UFC victory came by way of unanimous decision against Lucie Pudilova, who has since fought her way back into the UFC. Both Bernardo and Tennant are a combined 6-0 inside the Invicta FC cage, so the UFC will likely have a keen interest in whoever is able to get their hand raised on Wednesday night.

Oddsmakers currently see this fight as a pick ’em, as both fighters can be had at a -110 price tag.

With former flyweight champion Karina Rodriguez having inked a deal with Bellator, Williams and Souza will now square off for the vacant flyweight title. Wednesday’s co-main event is actually re-booking of a non-title fight originally scheduled to take place at Invicta FC 49 on Sept. 28, 2022. Williams has been on something of a comeback trail since being cut from Bellator after a defeat to Denise Kieholtz at Bellator 239, weeks before the COVID-19 pandemic began. However, her defeats in the Bellator cage have aged well, and “Warhorse” has since improved her record to 6-3 with two of those wins coming inside the Invicta FC cage. Her most recent victory came by way of rear naked choke against Liana Pirosin at Invicta FC 48. She tried to make a quick turnaround by welcoming Souza to the promotion at Invicta FC 49, but was forced to pull out of the bout.

The promotion found a replacement for Souza at Invicta FC 49, and Brazilian responded by defeating Maiju Suotama by way of unanimous decision. Souza has compiled an impressive 11-3 record and is currently riding a four-fight winning streak dating back to 2021. If she can defeat Williams and advance her winning streak to five, the 27-year-old could be looking at a UFC call-up or perhaps a booking on Dana White’s Contender Series later this summer. Victory will not come easy, however, as Williams has looked like a different fighter since her ill-fated Bellator run, and her improvements are reflected in the odds.

Oddsmakers currently see Williams at around a -120 favorite, with Souza roughly a +100 underdog.

Five additional fights flesh out what is sure to be an action-packed return for Invicta FC. Rubin, who fought Tennant to a split decision for the vacant bantamweight championship, will now take on up-and-comer Serena DeJesus, who is looking to make it five-straight wins. Prior to that, Claire Guthrie, who fought on the most recent season of The Ultimate Fighter as well as the most recent Invicta FC card, will return against 2-1 Auttumn Norton at 135 pounds. The winners of the aforementioned pair of fights could be jockeying for position in the title pecking order, with the most impressive winner likely to receive the next shot.

Elsewhere on the show, Marisa Messer-Belenchia is set to meet Elisandra Ferreira in the atomweight division. Ferreira will be making her promotional debut against a fighter in Messer-Belenchia who has also dabbled in professional boxing in the past, holding a 1-0-1 record. Another atomweight fight between veterans Katie Saull and Rayanne Amanda will precede it.

The only strawweight fight of the evening will kick off the show, as recent TUF competitor Laura Gallardo takes on 2-0 grappling specialist Fatima Kline. Gallardo, who entered the show as a late fill-in, competed up a weight class at 125 pounds. As a fighter known for her ability to blend wrestling with striking, Gallardo will enjoy a move back down to her natural weight class, though she will need to overcome a stylistic matchup with Kline, a regular competitor on the professional grappling scene since 2020.

A strawweight bout between Tanya Nijjar and Sayury Canon was originally scheduled to kick off the show, but a weight miss from Nijjar caused it to be pulled from the lineup.