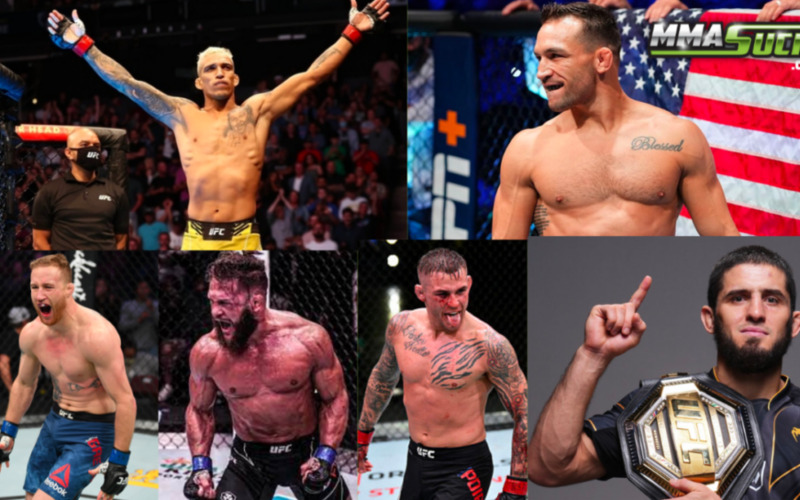 The UFC’s 155lbs division, lightweight has long been one of the most exciting divisions in the sport. From BJ Penn to Frankie Edgar, from Benson Henderson to the modern-day champions, Eddie Alvarez or Conor McGregor, it’s always been a division that has delivered competitive, exciting, PPV-worthy fights. No one accentuates the excitement of the division like Justin Gaethje.

The former WSOF lightweight champion joined the UFC back in 2017 and has never looked back. Nine post-fight bonuses, two fight of the years and two unsuccessful title shots have seen Gaethje hit a crossroads in his career. As The Highlight is looking to make yet another title run, it’s last chance saloon for Gaethje, as well as the demise of the ‘fun’ fights at lightweight seemingly coming to a close. The below stat is also insane when you consider Gaethje’s career.

With that being said, Gaethje is scheduled for another ‘fun’ one at UFC 286 in London as he takes on Rafael Fiziev.

The Future is Bright, but the Demise is Inevitable

It’s hard to deny that the current crop of lightweights are some of the most exciting fighters, regardless of division, that we’ve ever seen. It’s difficult to name a boring fight involving any of those men in recent years. They go in there every single time and put it all on the line. What’s important is that these men are taking on all comers, which has often seen them clash with each other.

We’ve seen Gaethje face Poirier, Alvarez, Chandler and going back, Edson Barboza. Predictably, all of which earned fight of the night honours.

Poirier has clashed with Gaethje, Chandler, McGregor, Dan Hooker, Alvarez, Max Holloway (who came up in weight to face The Diamond) and Oliveira.

Chandler, in his short UFC stint, has faced Hooker, Oliveira, Poirier, Gaethje and Tony Ferguson, earning him four post-fight bonuses in the process.

Oliveira, the former champion has dominated many as of late at 155lbs. Although he lost to the current champion, Islam Makhachev, he finished Poirier, Gaethje and Chandler and dominated Ferguson.

Some of the names coming up include skilled fighters, PPV stars, well-rounded guys and for sure, future champions.

Arman Tsarukyan, Paddy Pimblett, Jalin Turner, Rafael Fiziev, Drew Dober and Mateusz Gamrot are all names that are on the brink of the top five or top 10 of the division and each man could easily find themselves in a big fight this year. Whether it’s the PPV model with Paddy the Baddy which could get him a title shot, the wrestling nature of Tsarukyan or the striking of Fiziev, any of these men could easily see themselves in the title picture by 2024.

Taking a look at each man individually, it would be hard not to put Tsarukyan at the top of the list of ‘most likely to be a UFC champion’. MMASucka predicted that he would get a title shot next year due to his talent as well as the guys he’s already beaten. He was dominant last time out against Damir Ismagulov and although he has a loss to Gamrot, it was an extremely close, well-matched fight. He matches well with the top guys in the division and had a close fight with the champ in his promotional debut.

Who should I fight next? 👊🏼

Paddy Pimblett is the anomaly in this group of fighters. He’s the only one that, on the face of it, hasn’t shown that he’s championship material with regards to his skillset. He hasn’t been very impressive in his four UFC fights and many believe he lost his last outing against Jared Gordon. Interestingly, he’s the fighter that Dana White would most like to put in the title picture. He’s a ticket seller, a fan favourite and brings in the numbers.

Rafael Fiziev is an interesting prospect. It’s only since his big victory over Renato Moicano that he’s been on people’s radar as a future champion. He scored a huge knockout on this occasion, putting him on the map. Further victories against Bobby Green, Brad Riddell and most recently in a main event slot against Rafael dos Anjos have propelled him into the title picture. His UFC 286 bout with Gaethje will not only be a fan favourite fight but a victory for Fiziev in that one would, without doubt, make him one of the top contenders in the division.

Jalin Turner, Drew Dober and Mateusz Gamrot are all also exciting prospects. Turner has looked phenomenal as of late, racking up five straight finishes. Ranked #10 as it stands, Turner is due a big fight in early 2023 and got just that with Dan Hooker at UFC 285. Dober is also enjoying a strong run of form, on a three-fight finish streak of his own. Expect Dober to get a big fight in the first half of 2023… Renato Moicano, anyone?

Although Gamrot lost his last fight decisively to Beneil Dariush, he’s still one of the best at 155lbs. The former KSW lightweight champion can still make a run at the belt. A drop-down in competition from the top five is logical for Poland’s finest lightweight. A fight against Grant Dawson makes a lot of sense. He’s a respected name in the division but as of yet isn’t a top-ranked guy.

Don’t be surprised to see any of these guys make a run at the title in 2023 or early 2024. There isn’t much between them all and 155lbs will always be exciting. Let’s just hope that these up-and-coming guys can continue the ‘fun’ fights at 155lbs.