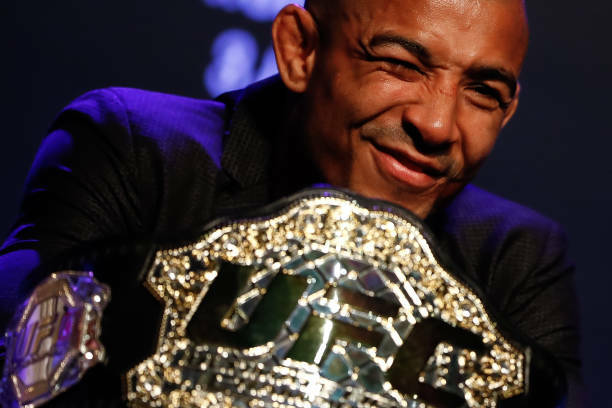 Jose Aldo is the most underrated champion in MMA history.

It’s a shame that the man who is tied for third in major title defenses (2 in WEC and 7 in the UFC) with George St. Pierre doesn’t get the respect that he is owed. But let’s get away from these grievances and see what arguably the greatest fighter of all time has shown.

The fighter’s Jose Aldo has beat is absolutely insane. His opposition has both the accomplishments and skill that you can marvel at him only facing defeat two times in his 28 fight career. Easily the worst fighter he has faced in his championship run is Manvel Gamburyan, a solid fighter in his own right, but one who Jose brutally knocked out cold in the second round.

Jose has beat Frankie Edgar twice, a man who is a future hall of famer, and another possible candidate for this series. Those wins alone could be enough to validate Jose’s career, but the manner in which he did it made those wins much sweeter. Completely neutralizing a fighter that has the adaptability of Frankie Edgar is one of the more impressive feats in MMA. And he did it twice. Jose’s performance in the second fight with Edgar was one of the best seen in the UFC. He popped Edgar at range, defended takedowns with inhuman skill and athleticism, and left Frankie Edgar, of all people, frustrated at the end of the fight, hoping he could just get one opportunity to do anything to Aldo.

If I went in depth about the fighter’s Jose has beat I would have book. With that I will just review a few of his greater victories. Chad Mendes is a championship level fighter and Jose beat him twice. Kenny Florian was a skillful fighter and Jose stifled him. Lastly, hall of famer Urijah Faber literally couldn’t stand up to the leg kicks of Jose Aldo who battered him for 5 rounds.

It’s common sense that any fighter who would appear on this list is at the very top of the elite when it comes to skill. The application of techniques against their competition is a reason for their success, but Jose Aldo is a different breed. Along with Demetrious Johnson, I rate Jose Aldo as one of the most skilled fighter to compete in MMA history.

As a striker, Jose Aldo is capable of pressuring, countering, outfighting, or hanging in the pocket when needed, but he does his best work on the counter. He works behind very few strikes. Certainly he has a wide range of attacks that he is very good at executing, but those are only for special occasions. Mostly Jose’s strikes are the simple jab, cross, lead hook, right low kick, and a few uppercuts and knees sprinkled in to dissuade takedowns.

The fundamentals of Jose are rock solid, allowing him to outclass elite competition with a shocking ease. His footwork is brilliant and no doubt one of the top in MMA. He is one of the few fighters capable of pivoting effectively and his tiny measured steps always keep in perfect range to counter effectively and he is quick and explosive enough to burst in and out of range if needed.

Jose’s defense is the best in MMA as well. He is able to apply all principles of defense into very deliberate system. His slips work together with how he moves his feet which works with the placement of his hands; Jose is capable of all effective defensive tactics and his great vision and feel allow him to flexibly adjust his defense on the fly. This allows him to defend strikes and takedown before they can even build up steam.

The standing grappling (clinch) and ground grappling game of Aldo isn’t seen that much, but he possesses, in my opinion, the best takedown defense I’ve ever seen. I would love to refer you to the second round of his Frankie Edgar fight at UFC 200 to show you my point. I marveled at the screen as I watched him manhandle my favorite fighter’s attempts to take him down.

In the clinch Jose is a very solid upper body wrestler and has a wide array of trips and throws. He doesn’t strike too much and looks to disengage mostly, but when he works in the clinch, it is generally a short and powerful exhibition of his skills.

His grappling on the ground is brutally underrated. He is one of the few MMA fighters who can and look to pass the guard. His top game is one of the best in the division and he can escape to his feet almost at will.

Cases Against Him Being GOAT

I would say there are only two main issues that could hinder his mythical GOAT status:

Loss to Conor McGregor in 13 seconds

Not consistently putting output in his fights

The Conor loss is a horrid skid across his nearly spotless record. All greats lose, but he lost in the most embarrassing way possible, on the biggest stage he ever will get in his career, to a fighter who trashed him for years in front of the whole world. It can’t get any worse than that.

Now onto the consistency. Jose is a beautiful fighter, but he generally doesn’t beat people up. His wins are just by being so technically superior to his opponents that they can’t generate offense on their own and thus he just coasts by with a decision victory. Of course this a newer adaptation as he was brutally finishing his opposition in WEC, but it could hurt him when other candidates are mauling their opponents and finishing them during their championship reigns.

This has been making a case for Jose Aldo being the GOAT. A wonderful fighter like him stands out above even some of the greats especially if he is able to beat Max Holloway at UFC 212 and I hope you came to appreciate this fighting genius a bit more.