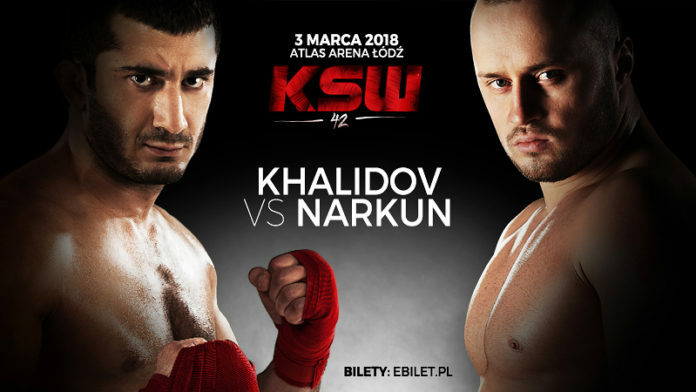 KSW middleweight champion Mamed Khalidov is in his second-straight title vs. title superfight, this time fighting up a division when he takes on KSW light heavyweight king; Tomasz Narkun.

The bout was announced via press release late Sunday night.

No stranger to the title vs. title superfights; Mamed Khalidov (34-4-2) enters the contest most recently defeating then KSW welterweight king Borys Mankowski in a title vs. title headlining bout at KSW 39 last May in front of an incredible 58,000 people.

Prior to this, Khalidov had finished 30 of his professional victories. He is known amongst the MMA community for his grappling prowess and his ability to end the fight anywhere it may take place. The better part of his current 14-fight win streak showcases just that.

Despite being primarily considered a grappler, Khalidov has some stellar knockout wins on his record as well, with his two most recent KO wins against Luke Barnatt and Michal Materla only taking a combined 52-seconds. The longtime middleweight king, despite only winning the official belt in 2015, Khalidov is a perfect 20-0 under the KSW banner.

Looking to end that run is 205lbs champ Tomasz Narkun 1!4-2). Standing at 6’3″ and nine years his junior, Narkun is arguably the most dangerous opponent Khalidov has faced.

Narkun won the light heavyweight title at KSW 32 when he finished Goran Reljic via first-round TKO. He has since defended his title three times, all first-round stoppages. ‘The Giraffe’ has a 100% finishing ratio with 11 submissions and 3 TKO/KO’s on his record and vows to do everything he can to end Khalidov’s run.

“I am a true mixed martial artist and I love sporting challenges, so when I was offered this bout I took it instantly,” said Narkun. “Mamed is an MMA legend in this part of the world and facing him is both an honor and a demanding challenge. But I think my skill set stack up really well against him and I’ll do everything in my power to win this bout on March 3rd.”

KSW 42 will feature some of the best talents in KSW history. The show takes place on March 3 at the Atlas Arena in Lodz, Poland.

More bouts will be announced in the coming weeks.