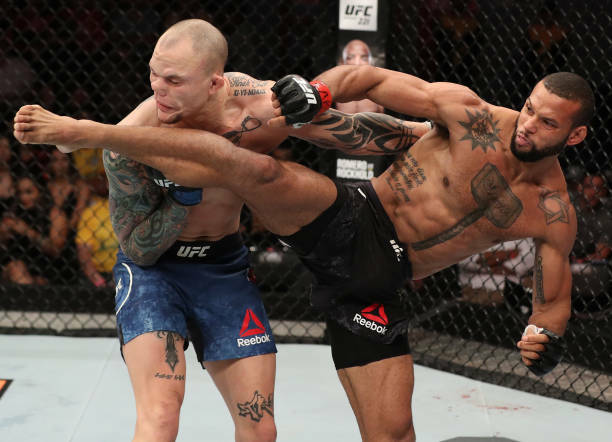 This past weekends UFC Fight Night featured a main event between Lyoto Machida and Eryk Anders. Machida hadn’t won a fight since 2014, and Anders was 2-0 since entering the UFC in July of last year.

In the co-main event, former bantamweight title challenger, Valentina Shevchenko made her flyweight debut against promotional newcomer Priscila Cachoeira. Along with those two notable bouts, fans got to see a very entertaining fight between two rising middleweights in Thiago Santos and Anthony Smith. It was an action packed even with several standout performances. Here are the five best from UFC Belem.

While Thiago Santos will get most of the credit here, both men put on an excellent show. The first round was back and forth. Santos was able to land a few shots on Smith that should’ve closed the show, but Smith just ate them up. Smith landed some of his own shots as well before the bell sounded.

Early in the second Santos connected with a body kick that made Smith crumple to the canvas. Santos unloaded shots on the grounded Smith from that point on and was awarded the TKO victory. This was his eighth knockout victory in the UFC, which tied Anderson Silva’s record for the most in the middleweight division history.

#2: Valentina Shevchenko def. Priscila Cachoeira via Submission (Rear Naked Choke) at 4:25 of Round 2

Valentina Shevchenko made her flyweight debut taking on promotion newbie Priscila Cachoeira. Shevchenko was the clear favorite as she has come close to winning bantamweight gold, and clearly had more experience than the 8-0 fighter.

Her experience showed early as she landed a takedown and began to rain down elbows on Cachoeira in what could have been a 10-7 round. The second round was very similar. She got her down again and began to rain down shots to the helpless Cachoeira. The fight could have been stopped a few times, but it seemed that Cachoeira was still fighting back. Late in the round, Shevchenko got her back and locked in a choke that finished the fight. She looked dominant in her first flyweight fight and should be challenging the champion, Nicco Montano, next.

#3: Polyana Viana def. Maia Stevenson via Submission (Rear Naked Choke) at 3:50 of Round 1

Polyana Viana made her debut in the UFC against former TUF competitor Maia Stevenson. She controlled most of the fight, attempting a few submissions early. Later in the round, after the failed submission attempts, she locked in a rear naked choke that won her the fight. She looked great in her debut, and has made herself someone to lookout for.

Iuri Alcantara came into the fight having lost his last two, while Joe Soto had lost his most recent outing as well. Both fighters needed a win, and Alcantara delivered early. He landed some powerful shots that dropped Soto. He was able to land some more strikes on his opponent that ended up finishing the fight, awarding him with a TKO victory.

#5: Deiveson Figueiredo def. Joseph Morales via TKO (Punches) at 4:34 of Round 2

The opening fight of the night delivered as Brazil’s own, Deiveson Figueiredo finished Joseph Morales in the second round of their fight. Late in the second round, Figueiredo landed a hard left hand that dropped Morales right next to the cage. Figueiredo walked him down and began to rain down ground and pound. After a few shots landed, the ref stepped in and stopped the fight, awarding the TKO win to Figueiredo.

Looking back at UFC Fight Night 125 in Brazil, these five finishes stood out among the rest. It was an exciting night that delivered with many of its fights.

This weekend, UFC 221 goes down in Perth, Australia. The main event sees former middleweight champion, Luke Rockhold, take on former interim title challenger, Yoel Romero. The co-main event will be between Mark Hunt and Curtis Blaydes. Join me next week as we look back at this event and pick the five standout performances.