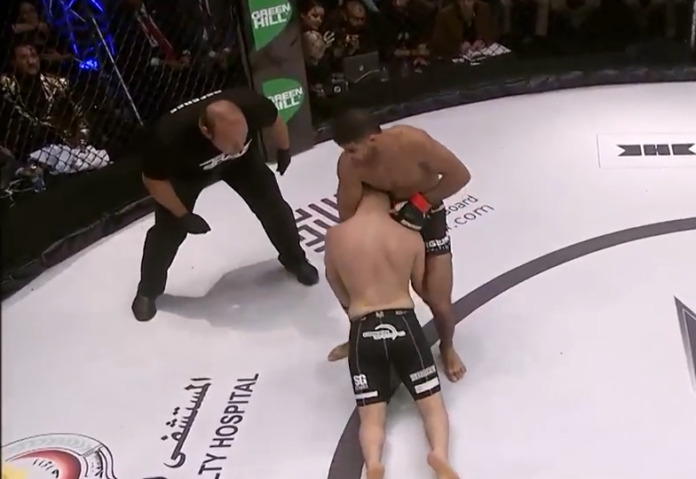 March 2018 was a wild month of combat sports. MMASucka’s Submission of the Month for March 2018 seems like the perfect place to start to showcase the month of craziness!

Knockouts, submissions, and terrific fights were plentiful. The month was absolutely loaded with incredibly finishes particularly in the submission department.

Last month, MMASucka’s Submission of the Month for February 2018 was an insane sequence of slams of grounded-knees that led to an eventual triangle choke win for Iwan Hermawan.

However, it is on to March. Where one of the most insane guillotine choke finishes you’ll ever see earns the top spot.

MMASucka’s Submission of the Month for March 2018: ‘The Honey Badger’ pulls off a literal guillotine at Brave CF 10 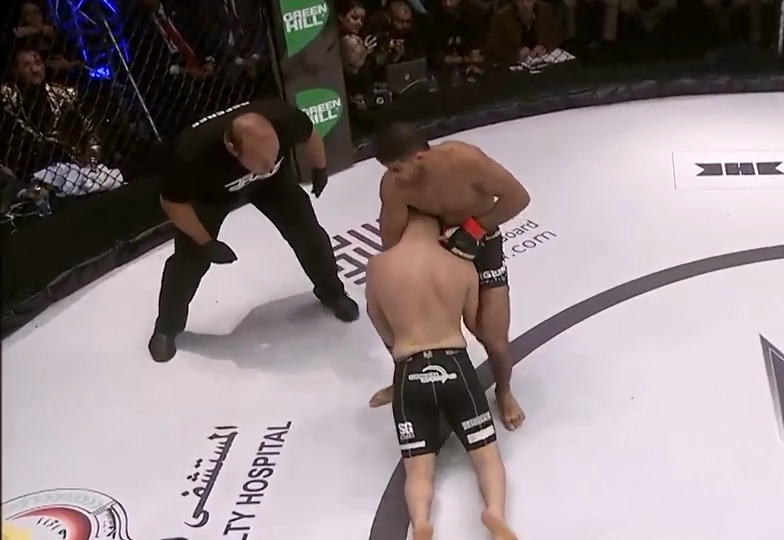 In one of the first events of the month, BRAVE CF 10: The Kingdom Rises took place on March 2, 2018. Live from the Prince Hamzah Sports Hall in Amman, Jordan.

On the preliminary portion of the show, a bantamweight contest took place between Jordan’s own Nawras ‘The Honey Badger’ Abzakh and Finland’s Abdul ‘ABBA’ Hussein.

Early on in the fight after Abzakh began to land some hard shots on the feet, Hussein shot in for a takedown. He lazily reached in for a single-leg, seemingly only to close the distance briefly. This wound up being his demise.

Almost immediately off of the single-leg attempt, Abzakh grabbed a hold of the neck of Hussein. Locking in a very tight guillotine choke. The Finnish fighter did his best to scramble out of the choke, initiating a quick scramble on the ground. But the home countryman refused to let go.

Hussein attempted to roll through the choke, but Abzakh rolled with him and held on. He was then able to get back into a standing position whilst maintaining the choke. And the visual this provided was parts horrifying and parts incredible.

As he stood back up, he lifted Hussein’s seemingly lifeless body before the referee stepped in, forcing an unconscious Hussein to ragdoll to the mat.

MMASucka’s Submission of the Month for March 2018: ‘The Honey Badger’ pulls off a literal guillotine at Brave CF 10

It was an incredible Marcelo Garcia-esque submission win for ‘The Honey Badger’, as he improves to a stellar 7-1 and rebounds from the first loss of his career.

That isn’t all, though! March 2018’s honorable mentions list of submissions gives us the most we’ve ever had. So let’s get started!