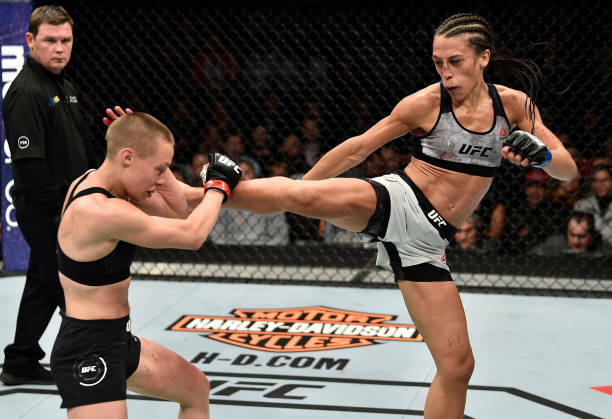 She didn’t have it all her own way though, as it was a close contest and Jedrzejczyk seemed to get stronger as the fight wore on.

Although every round was close, most experts agree that Namajunas won the first two rounds, lost the next two, and snatched the final round with a late takedown.

However, Jedrzejczyk seemed extremely confident that she had done enough to regain the title when the final bell rang.

She looked stunned when all three of the judges awarded Namajunas a unanimous decision victory, 49-46.

Jedrzejczyk was adamant at the post-fight press conference that she had won the fight and that the fight stats proved it.

Statistical Edge for the Challenger

If you hadn’t watched the bout and had only looked at the stats on Fight Metric, you’d probably agree with her.

They show that Jedrzejczyk landed 140 total significant strikes to Namajunas’ 105, Joanna retaining that edge in every round.

So how could she have lost three out of the five rounds? Or four out of five, if you believe the judges?

Although fight statistics are a handy guide for fight fans and analysts, they don’t give us the full picture. They tell us the total number of strikes thrown and landed, but they don’t tell us how hard or effective each of them were.

We would surely all agree that one light jab does not have the same effect as a walloping right hook or a head-kick. One solid connection with the latter would have a far more telling effect than even ten jabs. Nonetheless, the fighter who landed the jabs would win the round if we judged it purely on the numbers.

Most fighters will tell you that stats mean nothing. Recently, Chael Sonnen pointed out that Jedrzejczyk might have a case if this was amateur boxing, but MMA fights are scored on the basis of damage inflicted.

Sure, if one fighter lands twice as many strikes as their opponent, then it’s fairly likely that they won the fight.

When the number of strikes landed is reasonably close, however, we cannot rely on statistics to determine who won the fight.

Breaking down the rounds

Judging a fight based on the accumulation of strikes alone is no better than looking at two fighters at the end of a contest and deciding who won based on who looks less beat up. If we judged fights that way there would be no need for expert judges in the first place.

Jedrzejczyk landed 24 significant strikes to Namajunas’ 21 in the first round and 25 to 20 in the second.

So why didn’t she win those rounds?

Well, in the first round Jedrzejczyk did a decent job of pressuring Namajunas with her jab, but she didn’t land anything that really put her on the back foot. Instead, Namajunas pressed forward for the entire round and her head movement caused the Polish star a lot of problems. Jedrzejczyk managed to hit her with a short right hand, but then ate a powerful 1-2 combo and a big right hand that was followed up by several more shots.

The second round was fairly even and Jedrzejczyk did a lot of damage to Namajunas’ leg, but two big left and right hooks and a number of punches that snuck through Jedrzejczyk’s guard were enough for the champion to clinch the round.

The fight was ultimately decided in the final round, which was also extremely close, although you wouldn’t know it looking at the stats. Jedrzejczyk out-struck Namajunas 84-70.

Although she landed 14 more strikes, she was hit with a hard left hand at the beginning of the round, a solid one-two, a big lead-uppercut and a number of hooks. Jedrzejczyk landed plenty of shots in these exchanges and a solid knee to the body, but Namajunas ultimately sealed the round with a late takedown.

The numbers simply don’t tell the whole story. It’s clear who was having more success in these rounds if you watch the fight. That’s not to say they weren’t close.

They say numbers don’t lie, but in this case, they are misleading and there’s simply no substitute for watching the fight in full.