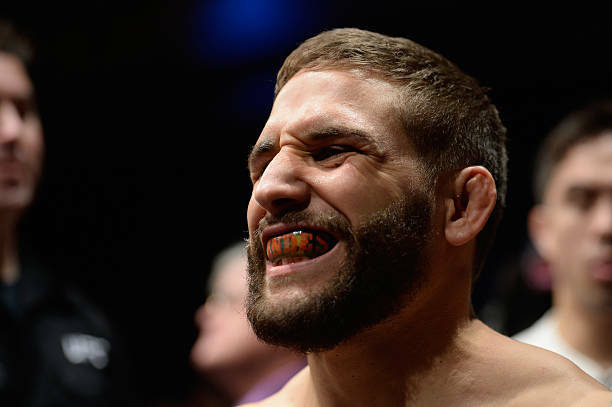 With so many cards scheduled for this huge weekend, there are bound to be several bouts that fly under the radar. Here are a list of fights this weekend that you should check out in addition to all the scheduled headliners.

Former UFC and Strikeforce veteran, Kurt Holobaugh, makes his return to the octagon after last competing for the organization five years ago at UFC 159. Holobaugh spent some time in Titan FC improving his game. The multi-time Titan FC featherweight champion has won his last three bouts. It would be considered four, but his knockout win against Matt Bessette on season one of DWTNCS was overturned to a No Contest after it was alleged Holobaugh had rehydrated with an IV before the bout.  Kurt Holobaugh is a very pressure oriented fighter who will look to push the pace and earn an early knockout victory.

Former RFA featherweight champion, Raoni Barcelos vacated his title to sign with the UFC. Barcelos will look to bring the pressure as well with six of his eleven wins coming by knockout. His only loss came in 2014 when he took on Mark Dickman but is currently riding a four-fight win streak.

Raoni Barcelos will be looking to start off his UFC run with a bang, whereas Kurt Holobaugh will look to return to the organization after five years away while in prime form.

Hometown “Slam King” Gerald Harris will look to get back on track after his recent return from a brief retirement. Harris took on a very late notice matchup against BJJ superstar Rafael Lovato Jr. at Bellator 198. He will look to take his 25 career wins into the cage and try and grind out a win, rebounding from his previous loss. But, Harris must be careful as he takes on a young, dangerous Ukranian.

Yaroslav Amosov has yet to taste defeat. He boasts a professional record of 19-0, 17 of those by way of finish. The Tech-Krep FC welterweight champion will be making his debut for Bellator and his North American debut. Look for Amosov to try and impress, whether the fight stays standing, or whether Harris gets one of his patented slam takedowns.

SBG Ireland’s Will Fleury will take his undefeated record into Bellator 203 for his promotional debut. The Irish native is 4-0 with three finishes. Fleury has competed for organizations such as BAMMA, EFC, and Brave CF. If anything, it’s one of the few battles with two undefeated fighters putting up their “0” this weekend.

Much like his opponent, Macedonia’s Alen Amedovski will take his 5-0 record into the Bellator cage for the first time this weekend. Amedovski has finished all five of his fights by KO/TKO. He has primarily showcased his high-level heavy-handed game whilst competing on the Italian regional scene, and also has a nice KO win over Badr Mamdouh in the Kombat League. He will look for his third knockout in 40-seconds this weekend.

Typically, a Chad Mendes fight would be front and center on virtually any other weekend. Unfortunately, the three-time UFC title-challenger flies a bit under the radar currently due to a period of inactivity thanks to a failed USADA test. We have not seen the Team Alpha Male star compete since a 2015 knockout loss to Frankie Edgar, but he is wasting no time jumping back into the featherweight division after years away.

With a stellar record of 17-2, featherweight standout Myles Jury will look to welcome Mendes back to the featherweight division in a bad way — at least from the perspective of Mendes. After dropping two straight to perennial contender Donald Cerrone and submission ace Charles Oliveira, Myles Jury has since won two-straight. He looks to pick up arguably the biggest win of his career this weekend with an early finish while continuing to ride his new wave of momentum after starting his career a perfect 15-0.

1 – Luis Santos vs. Tyler McGuire (One Championship: Pursuit of Power)

Not to be left out, ONE Championship returns with the first event of the weekend in the early hours of the morning on Friday, July 13. On this card, we will see Luis Santos bring his astounding 64-10 record into the cage once again. The Brazilian picked up an impressive unanimous decision win over Kiamrian Abbasov in March, successfully rebounding from a TKO loss to Kadestam months prior. You can always count on Santos to bring big power to the cage, with 36 of his 64 wins coming by way of knockout.

At 10-0, Tyler McGuire is an undefeated American with a big opportunity in front of him as he makes his ONE Championship debut. Throughout his ten-fight career, McGuire has earned seven wins by way of impressive submission. Though the opposition was less-than-stellar, McGuire’s two most recent wins both came via submission in under three minutes combined.