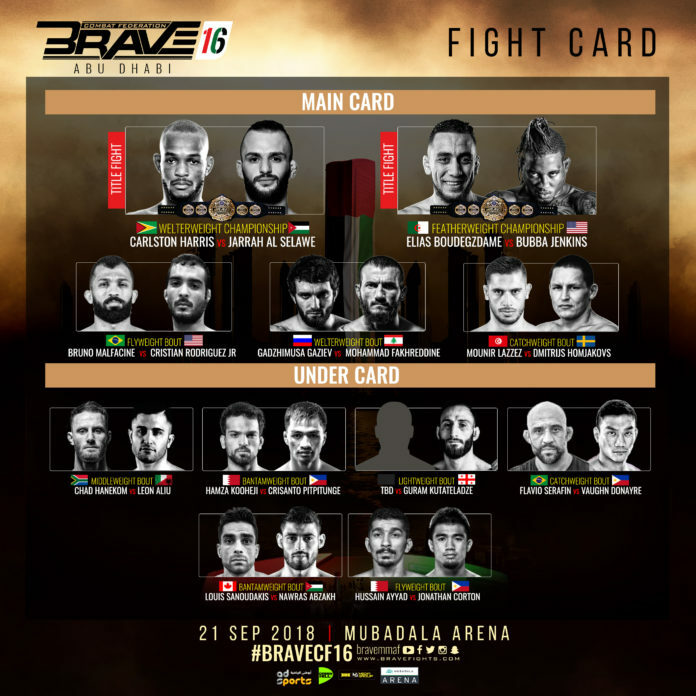 Just a few days after revealing their Colombian debut, Brave Combat Federation has announced their entire fight card for Brave 16.

Brave 16 will take place at the Mubadala Arena in Abu Dhabi, UAE on September 21. The fight card features two major championships fights. The main event of the show will be a welterweight title contest, as Carlston Harris from Guyana defends his strap against Jordan representative Jarrah Al Selawe.

In the night’s co-main event, reigning featherweight king Elias Boudegzdame from Algeria will defend his title for the second time against 2011 NCAA Champion, Bellator veteran Bubba Jenkins of the USA.

The rest of the main card features some of the most highly-anticipated fights, however. Ten-time IBJJF World Champion out of Brazil, Bruno Malfacine faces Cristian Rodriguez of the USA at flyweight. Mohammad Fakhreddine of Lebanon will make his big return against a killer Dagestani in the form of Gadzhimusa Gaziev. Undefeated Tunisian fighter Mounir Lazzez will make his promotional debut against Sweden’s Dmitrijs Homjakovs at catchweight.

The massive fight card will feature a representative from seventeen nations. This includes Canada, the USA, Russia, Brazil, Jordan, Sweden, South Africa, and much more.