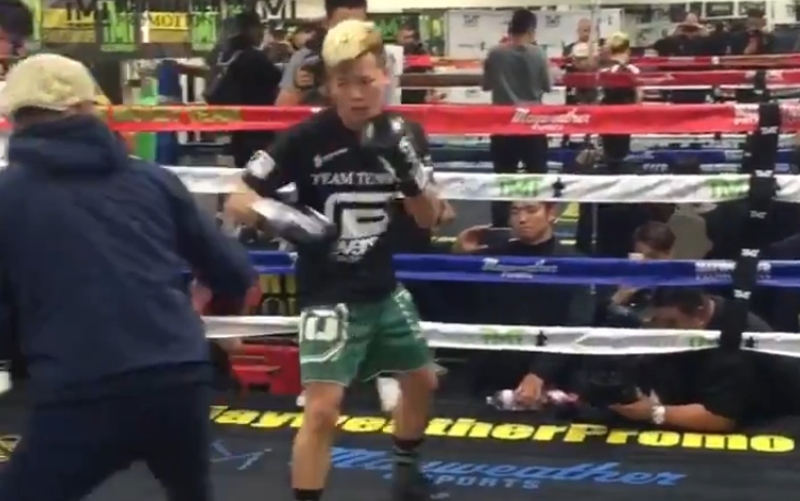 Yesterday, live from Las Vegas, we saw staff from RIZIN Fighting Federation and Mayweather Promotions come together for a media day extravaganza from the Mayweather Boxing Club in Nevada.

This, of course, included the two fighters who will make up the RIZIN 14 main event; Floyd Mayweather and Tenshin Nasukawa.

Along with the RIZIN 14 Media Day, we also saw some open workouts and fighter quotes from those involved on December 31. Ahead of their exhibition bout on NYE, both fighters had some very interesting things to say to the media in Las Vegas.

“This is a great way for me to go out there and give the people some entertainment, you know. It’s an exhibition match, but it’s giving me a chance to go do something different. I love competing against fighters from all walks of life – just like in my amateur days. It’s all about entertainment, nine minutes of entertainment, and it’s going to be amazing. I am in that business, the entertainment business. That’s what I go out there to do, and I love to do this. I’m enjoying life, and I’m going to enjoy this experience.

“This is my first time coming to Las Vegas, and I’m very excited to be here. The fight is very close and I’m training hard every single day to face Mayweather and leave my mark. It is a great opportunity and I’m just happy to take it. I plan on going out there to put everything on the line and show all of my strengths. I really think I am the faster fighter, and I’m just going to use my weapons against him. There has never been a Japanese fighter to face Floyd Mayweather in the ring, as a Japanese athlete, this is a great honor and a challenging task. But I’d like to make a big impression. I want the whole fight community, the whole country of Japan, and the entire world invested in this fight. On December 31, I’m going in there fully believing in myself, ready to prove myself.”

Along with the RIZIN 14 Media Day & Open Workouts, we also learned the official rules for the bout.

As you can see by the quotes above, both fighters are approaching this fight with very different mindsets. Floyd Mayweather is coming into the contest not expecting much of a fight at all due to it being an exhibition. Whereas Tenshin Nasukawa is going into NYE fully prepared to fight just as hard as he would any other bout.

The only thing that makes this fight different from a typical 3×3 professional contest is the fact that no records will be altered.

A few of the highlights from the media day are below. They come in the form of Floyd Mayweather getting heated with a reporter who asked him why he wasn’t fighting Tenshin under kickboxing rules, and Tenshin Nasukawa absolutely melting pads during open workouts.

.@teppentenshin is out here melting pads at the #RIZIN14 media workouts inside the Mayweather Boxing Club pic.twitter.com/Gh56SFPzRN

Floyd Mayweather Jr. was not pleased when I asked him why not allow kickboxer Tenshin Nasukawa to kickbox in their New Year’s Eve fight? @News3LV pic.twitter.com/InbOg5Ww79