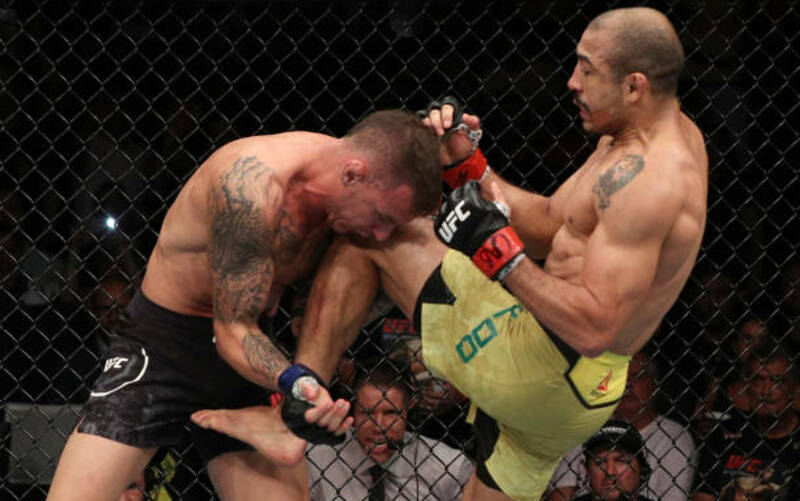 In the lead up to UFC Fortaleza, many of the talking points surrounding Jose Aldo read like a eulogy. These sentiments likely stemmed from his recent announcement that he will be retiring after he completes the three fights remaining on his UFC contract. In combat sports, retirement talk oftentimes indicates a fighter doesn’t have his or her head completely in the game. Having one foot out the door, some might presume said fighter is no longer among the elite. Whether Aldo’s fighting ability is declining is up for debate. But in his co-main event slot against Renato Moicano, Aldo proved that he’s still one of the top active featherweights in the UFC. In fact, one could argue the only fighter ahead of him is the champion he was superseded by, Max Holloway.

Champion or not, this was an impressive victory. Renato Moicano is on the rise at featherweight. Like Aldo’s previous foes of whom he was defeated by, Moicano is tall, long, and generally big for the 145-pound weight class. Though the first round appeared competitive, none of Moicano’s perceived physical advantages mattered in the end. Jose Aldo defeated Renato Moicano via 2nd round TKO. Further solidifying the nostalgia surrounding this vintage stoppage, Aldo leapt out of the cage and ran into the Brazilian crowd to celebrate. This is exactly what he did seven years ago after knocking out Chad Mendes at UFC 142. At that time, the victory was a title defense proving he was the number one featherweight in the world. The TKO over Renato Moicano indicates he may currently belong in the number two slot.

If Aldo’s proclamation of having only three fights remaining holds true, he’s now down to two. Aldo wants to fight again in Brazil at the UFC 237 event in May. One match-up that stands out as a possibility is a bout against Brian Ortega. Like Moicano, Ortega is ranked in the top 5 of the UFC featherweight division. Ortega is currently coming off of a loss against Max Holloway. Were he to lose to Aldo, it wouldn’t necessarily derail an inbound title shot. At the same time, it would by no means be the much-needed tune up fight many believe Ortega could use right now. But it would undoubtedly be an intriguing match-up for fans alike.

Ortega absorbed a record-breaking number of strikes in his failed bid at the featherweight title in December. Because of the damage taken in the fight, he was suspended for six months or until medically cleared. Should Ortega wait for the suspension to run it’s course, he will be eligible to compete in June of 2019. This would of course be after the May 11th UFC 237 event Aldo has his eyes on. Although Ortega looks to have healed like wolverine, he may need more than six months to fully recover from the Holloway fight. Though Ortega’s cryptic tweet posted on the evening of Aldo’s victory points to his interest in a possible showdown.

Moving up to Lightweight

Aldo has expressed interest in moving up for his long awaited UFC lightweight debut. He’s mentioned fighting Donald ‘Cowboy’ Cerrone, Dustin Poirier, and other ranked lightweights. There has even been talk of Aldo and Anthony Pettis resurrecting plans for their super fight that never came to fruition.

Currently, Pettis is scheduled for a one-off welterweight encounter against Stephen ‘Wonderboy’ Thompson. The Pettis/Thompson fight is currently scheduled to take place at Ultimate Fight Night 148 on March 23rd, 2019. For Pettis to fight Aldo on May 11th, he would need to come out of his fight with Thompson relatively unscathed. He would then need to fight Jose Aldo six weeks later at 155 pounds. Though not impossible, these circumstances do not sound overly likely. But then again, Anthony Pettis has already publicly accepted.

The Clock is Ticking

Whoever Aldo’s final opponents in the UFC will be, one thing remains certain. Jose Aldo is one of, if not the greatest featherweight to ever do it. Even without the belt, his longevity as a competitor in the upper echelon is truly remarkable. It is this writers opinion that we as fans should enjoy what remains of Jose Aldo in the UFC. If he ends it on his terms, like he’s says he will, he will be sorely missed in less than a year. The clock is ticking.