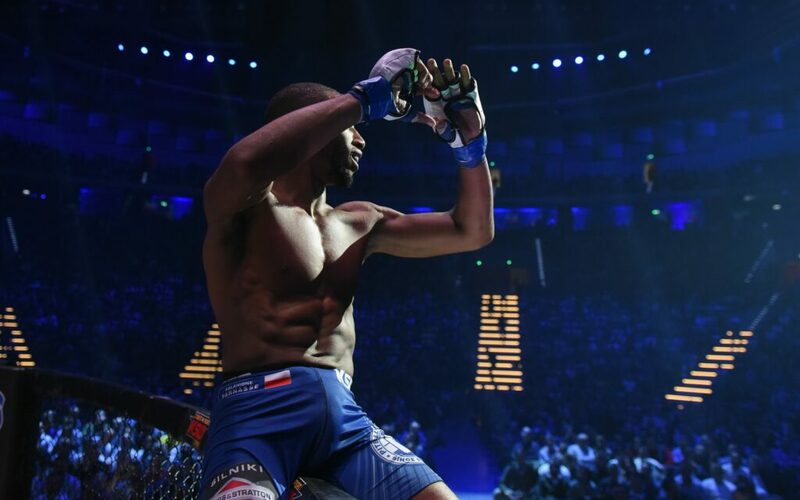 KSW 48 is just around the corner with KSW set to host their second card of the year on Saturday April 27, 2019 live from Lublin, Poland. The event can be seen on KSWTV for North American viewers. The eight bout card is packed with action ranging from bantamweights all the up to light heavyweights. The main event for the night is a interim featherweight title fight between French phenom Salahdine Parnasse and Polish youngster Roman Szymanski.

Here is a statement on why an interim match-up has been announced. Wojslaw Rysiewski, KSW Director of Sport stated in the press release, “With Mateusz Gamrot holding the featherweight and lightweight titles we anticipated that this situation might happen. Gamrot’s next title defense will be at lightweight and we did not want to hold up the featherweight division.” He continued by saying, “Both Parnasse and Szymanski have earned their spots in challenging for the title so we are very excited to see these two face each other. They are two of Europe’s top young talent at featherweight.”

Since joining KSW, Parnasse has remained undefeated (12-0-1) by winning all three of his bouts in the promotion. Though all three are decision wins, Parnasse has shown the ability to be a champion in the bright lights of KSW. All three of those victories are over former champions. Lukasz Rajewski at KSW 41, Artur Sowinski at KSW 43, and Marcin Wrzosek at KSW 46 have all suffered defeat at the hands of Parnasse. In May 2018, Parnasse told MMA Sucka, “Being in KSW is a really good thing because it’s a top organization with good fighters. And I hope to take the belt in KSW.” Less than one year later and Parnasse’s words become reality. Look for Parnasse to try and silence any remaining critics and go for the knockout victory.

Szymanski, the 25 year old Polish fighter, has 15 professional bouts under his belt. Currently, he is on a 11-2 run after losing his first two pro bouts. 3-1 in KSW, Szymanski’s lone loss was by decision to “The Polish Zombie” Wrzosek at KSW 41. Parnasse defeated Wrzosek by unanimous decision five events later if you are into “MMA math.” Szymanski is coming off an impressive decision victory over Daniel “Tucanao” Torres at KSW 46, who was on an impressive run of his own. Both fighters have many decision victories showing they can push the pace and fend off their opponent, put who has what it takes to push through championship rounds, should the contest go that far?

The Rematch 14 Years  in the Making

Most fighters do not get to see 14 years of experience, much less get a rematch and shot at redemption. The co-main event of KSW 48 is set to feature two long-tenured veterans of the sport. Lukasz Jurkowski (16-11) will battle Stejpan Bekavac (19-9) for the second time. The two first competed at a Croatian regional show in December 2005 with Bekavac taking the victory.

Jurkowski’s MMA debut came at KSW 1 where he won the one-night tournament, defeating three other opponents on the same night. He continued his impressive showing when he made it to the finals of KSW 2 and KSW 3. After his KSW 15 loss to Toni Valtonen in March 2011, Jurkowski decided to retire from competition. Jurkowski did not venture far from the sport, commentating for KSW events and staying active on Polish TV. If KSW were to develop a Hall of Fame as the UFC, Jurkowski would be a first-ballot entry.

Jurkowski has a tough test in front of him if he wants another KSW victory. Bekavac’s last outing saw him defeated by the heavy bomb-throwing striker Jose Daniel Toledo Canellas back at ACB 84 in April 2018. Bekavac does hold a victory over Jurkowski early in their careers and will try to use that as a positive building point to victory number two. He has suffered a string of losses as of late but has fought some of Europe’s best talent. This is a big fight for both guys and look for Bekavac to try and cement his legacy with two wins over the KSW icon.

Polish Wrecking Machine Back in Action

Only one Polish man in KSW can have the honor of being MMA Sucka’s “Polish Wrecking Machine” and that’s Gracjan Szadzinski. His last three bouts have all ended by KO with only one lasting to the second round. His knockouts of Maciej Kazieczko at KSW 41 and of Paul Redmond at KSW 44 are epic, must-see KOs. No one “swings for the fences” in MMA like Szadzinski. As always, look for him to end the fight early with one solid shot to drop his opponent.

Gracjan’s opponent for the night is a 28 year old (but very experienced) Polish fighter in Marian Ziolkowski. Marian sports a record of 20-7-1. He is 1-1 since entering KSW, with the lone loss coming to former champion and Jiu-Jitsu ace Kleber Koike Erbst. Most of Ziolkowski’s victories have come by way of submission. He will want to get this fight to the ground quickly with Gracjan and try to land a submission. Otherwise, this fight could have a dangerous ending for the “Golden Boy.”

Other Names to Watch

American Top Team Zagreb prospect Filip Pejic brings his 13-2-2 record into the KSW cage for the first time, taking on Filip Wolanski. After several wins on the Croatian MMA circuit, Pejic fought under the Final Fight Championship banner earning a 5-1-2 record. Four of Pejic’s last five victories have come by way of finish, so look for him to make quick work in his debut. Wolanski will be a very tough debut for Pejic. He sports an 11-3 record with his first loss coming in 2012. The only two losses since have come in KSW, but were a split decision loss to Daniel Torres and unanimous decision loss to the Polish Zombie.

Shamil Musaev, the undefeated Russian (12-0), brings his game to the KSW stage against fellow KSW debuting figher, Hubert Szymajda of Poland. Musaev has only tasted defeat once, and that was in his amateur MMA debut. Since then he has ran through the competition with TKO/KO and submission victories alike. As the competition takes a step up, can the Golden Team Russian MMA prospect continue to climb the ladder. Cane he reach such success as fellow Rissian, Khabib Nurmagomedov?