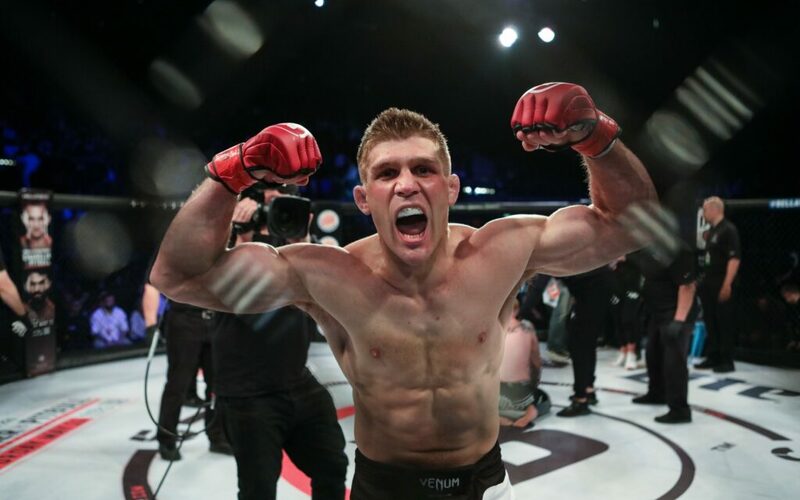 Bellator started their European Series three months ago in Newcastle. On Saturday night, they held their second European Series event, but this time the stage was set in Birmingham (Resorts World Arena). In the main event, former lightweight champion Brent Primus took on Birmingham’s own Tim Wilde.

The co-main event featured another Birmingham fighter. The younger brother of top UFC welterweight contender (Leon Edwards) Fabian Edwards got the co-headlining slot on the card. He looked to improve his undefeated record to 8-0.

This was a special card for the European crowd, with a lot of SBG affiliated fighters scheduled to fight. Bellator Birmingham had a perfect mix of fighters, with young talents, crafty veterans and established stars.

Primus just needed 1:20 to finish his opponent via submission (go-go-plata) in the main event of Bellator Birmingham. A beautiful performance by the former Bellator lightweight champion, who has his eyes set on a third fight with current lightweight champion Michael Chandler. Primus is very confident when it comes to his jiu-jitsu, he claimed in his post-fight interview.

Birmingham’s own Fabian Edwards had a tough opponent in Falco Neto, but that didn’t stop the 25-year old Bellator prospect in any way. He knocked Neto out after three hard-hitting up-kicks that landed clean. Neto was clearly rocked but still standing. As soon as Edwards got up from the ground, he knocked Neto to the canvas, forcing the referee to stop the fight. As a result, Edwards improves his professional record to 8-0. After the match, he asked for a higher ranked opponent.

Laser guided hands 👊 Now fully upgraded with laser guided 🦶.
.
Who do you want to see @fabianedwards24 fight next? ☠️ pic.twitter.com/iEuTj3pFCX

All four main card fights ended in a first-round finish. The main card got started by another highlight from kickboxing legend Raymond Daniels. The American kickboxing champion knocked his opponent out with a beautiful spinning overhand right. The result became Daniels first MMA win.

Also on the main card was a bout between Pedro Carvalho and Derek Campos. After being taken down, Carvalho survived the storm and started landing shots when he got back to his feet. With just two minutes into the first round, the SBG fighter Carvalho finished his opponent with a kick to the body, that led to a ground-and-pound knock-out finish.

This main card is 🔥! Catch the FULL first round between @DC3Stallion and Pedro Carvalho right here.#BellatorBirmingham pic.twitter.com/oc7tuUVu7Y

Some really talented fighters made their pro debut on the prelims of Bellator Birmingham. The UK Mixed Martial Arts scene is bigger than ever, and that shows with the amount of talent that’s coming up. Raphael Uchegbu, Akonne Wanliss, Ashley Reece, Dominique Wooding, Davin Hughes, and Saul Rogers all had very solid wins in Birmingham.