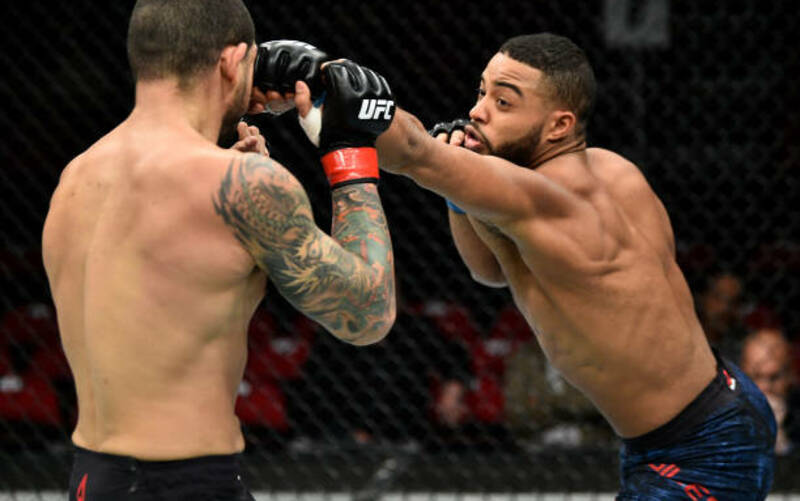 “The third coast” (the states often referred to which borders the Gulf of Mexico) is home to many of the bests fighters in the world. The area from Texas to Florida is an area where fighting and football are in everyone’s DNA. Trevin Giles was no different. This UFC middleweight will not only defend his place in the UFC, but also defends the streets of Houston, Texas as a police officer with the Houston Police Department.

“Originally I began training MMA to stay in shape to play college football for Texas Southern University but I ended up getting better in MMA so I decided to try competing,” Giles told MMASucka. The San Antonio born native attended Alief Taylor High School in Taylor, Texas. This is where his high school football days took place. The big, strong defense star decided to move from the gridiron to the cage after a big win. “I won my first fight and decided to commit myself to MMA.”

No fighter is gifted enough to learn on their own. Giles has a strong, dedicated team behind him which has propelled him from such shows as Fury FC all the way to the bright lights of the UFC. ” There are plenty people to credit for helping me become the fighter I am. My head coach Eric Williams helped me by introducing me to the first techniques I ever learned and is still a big help today,” Giles said. The head man at Elite MMA, Williams, began teaching submission grappling back in 1993, the same year UFC 1 took place. He also opened his gym 20 years ago this year. Williams is also the first BJJ student from Houston, Texas to earn his BJJ black belt.

Giles also stated all of his sparring partners and anyone who’s believed in him has been instrumental in his growth. There was another person in particular he wanted to mentioned helped him develop his striking. “Edosasere Omoruyi (A.K.A Lee) I believe helped me the most with my striking. he was the guy that destroyed me every day when I began to spar but he also had the best advice and guidance on how to improve my game.”

“Also my lord and savior Jesus Christ. He is always listening when I need him. Without him I would not be in the position I’m in today. There are many more people I could thank but this list would go on and on.”

The Journey to the UFC

With three bouts in the UFC already under his belt prior to his August 03, 2019 bout with Gerald Meerschaert at UFC of ESPN 5, Giles’ professional record sits at an amazing 11-1 with 10 of those 11 bouts coming by way of finish. To make this even more impressive, Giles is also currently a police officer with the Houston Police Department. “In order to both fight and work as a police officer for the Houston Police Department I had to sacrifice a lot of free time as well as sleep as I could get as much training as possible.”

His lone decision victory came in by far his most important bout outside of the UFC. This also proved to be the victory he needed to enter the UFC. He battled now-UFC fighter Ryan Spann at LFA 3: Spann vs Giles in February 2017 in a UFC-caliber bout.

The bout was a split decision win for Giles and ended up providing the boost he needed to get that call from the UFC. “The bout with Spann was a big deal. I had a good feeling the UFC would take me after that fight because besides fighting Spann there was no one else in the division I needed to fight to prove myself,” Giles told MMASucka. “Eryk Anders had just began fighting for LFA so that would have been a great fight but by that time I had done more than enough to get to the UFC.”

Stepping on the Big Stage

On July 08, 2017 at UFC 213 Romero vs. Whittaker, the chance came for Giles to show he belonged on the biggest stage of them all. His debut bout came against James Bochnovic who was 8-1 as a professional riding an eight fight win streak. Giles was definitely giving up a size advantage. James had a four inches on him in height and seven inches on him in reach.

Both fighters spent the first half of the first round in the feeling out process. Giles was able to land a nice takedown and spent most of that time on top. Eventually James balled up and Giles landed several heavy shots. James got to his feet with 40 seconds left but Giles was quick to slam James back down. Giles land more heavy shots to dominate round one.

After round two got started Giles did a great job landing combos and getting out of the way of the lengthier James. Giles landed a body shot that dropped James about a minute into the round. Once on the ground Giles should his ground skills locking in a North/South choke and transitioning that into back control. After eventually getting a full mount, Giles rained down shots that forced the referee to stop the bout. This debut bout has set the tone for UFC career Giles is on track to have.

The Immediate Future for the UFC’s Rising Star

Giles is set to make his fourth appearance in the UFC cage where he currently owns a record of 3-1. “The next fight will be a great fight. I feel really good about it,” Giles told MMASucka. “I have a lot of respect for Gerald as a fighter. He is tough and he has the ability to take damage and still be mentally sound enough to lock up a submission and finish fights. However, I see myself finishing the fight early third round if not sooner.” The bout will be on the UFC on ESPN 5 card which takes place this Saturday August 03, 2019 from the Prudential Center in Newark, New Jersey.