247 Fighting Championships are back with their third and final fight card of 2019. Brawl in the Burgh 2 is set to go down tonight from the Printscape Arena in Canonsburg, Pennsylvania. The fight card is shaping up to be a good one, with two title fights on tap and plenty of other intriguing matchups.

In the evening’s main event, 247 FC vet Ethan Goss will be taking on John de Jesus for the promotion’s inaugural featherweight championship. Goss was victorious in the co-main event of 247’s first event, while de Jesus is a training partner of former 247 FC lightweight champion and current UFC fighter Khama Worthy. Preceding that fight in the co-main event, another 247 FC vet in Joey Munoz will be taking on former UFC and PFL fighter Yuri Villefort. Munoz was defeated by Worthy for the lightweight championship back in April, while Villefort is looking to gain some momentum and break back into the major MMA promotions.

The first of the card’s three professional fights will be a 195 pound catchweight fight between Cory Crumpler of North Carolina and Trenton Zdarko of Pittsburgh. Both fighters come into this fight undefeated in their pro careers, and they both have serious jiu-jitsu credentials that should make for some fun grappling exchanges. In the other title fight, Cody Reece will be taking on Chase Boyde for 247’s inaugural advanced amateur welterweight championship. They are 5-0 and 4-0 in their amateur careers respectively and are looking to add some gold to their resume before turning pro. Follow along with MMASucka as we provide you with live results of Brawl in the Burgh 2. 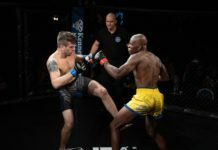