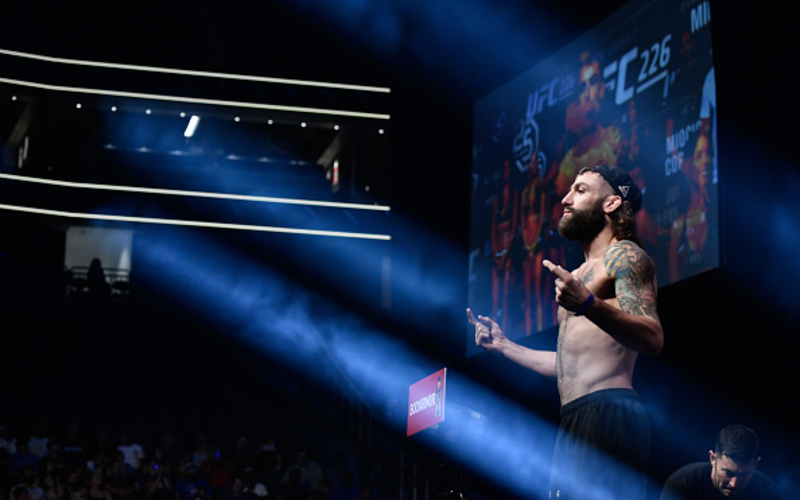 Spokane, Washington is the home to a handful of high calibre fighters that have made their way to the UFC. On top of the heap is the current number eight ranked welterweight, Michael Chiesa.

The 32-year-old is riding a three-fight winning streak and picked up arguably his biggest victory in his most recent outing, a unanimous decision over former UFC lightweight champion Rafael dos Anjos. And then a pandemic hit.

Chiesa was riding a high after that January 25 win and then the world changed. Social distancing, gyms closing and people dying — the coronavirus.

When you are at the top of your career and then life gets put on hold, things change. This happened far too close to home for the UFC star.

“People are dying,” Chiesa told MMASucka.com. “My uncle in Italy died from it, so yeah, it’s a real thing.

“He was just really old. He lived in Italy and he just got the coronavirus. It’s pretty cut and dry. Nothing too crazy about it, just poor luck.”

Things were put into perspective for Chiesa. But life goes on.

The training was not the same as it would be. He had to get creative and not get complacent. As a man ranked in the top 10 of his division, the Sik Jitsu has to be ready when life gets back to normal.

“I’m just trying to stay as active as I can,” Chiesa explained. “Not a lot of people are training right now. A lot of gyms are closed. So I’m just doing my best to stay as fit as I can. I want to hit the ground running when some of these gyms open up and get back to work.”

Last week it was announced that the UFC would be holding three events in early May. All three events would be sanctioned in Florida.

The timeline is not right

If Chiesa was called to the table and asked to fight on one of these cards would he jump at the opportunity? The answer was simple.

“The key to my success these last three fights has been long training camps, lots of preparation, lots of game planning and things like that. For me, that’s just not realistic right now. I’m not gonna go back on that. I have a winning formula and it’d be stupid of me to not stick to that formula even if it means I have to sit out a little longer.”

Despite not wanting to make the walk to the octagon at this stage of the game, Chiesa knows that some fighters have to. Not just for themselves, but for their families.

“I think it’ll go down, but only time will tell. He’s [Dana White] busted his butt to make this happen and I don’t think it’s the wrong thing to do at all. Just because my stance on it is that I’m choosing not to fight until I can get training partners back and have my balanced training schedule, that doesn’t mean that I’m against it. He’s doing what he’s got to do. These guys have families to feed and stuff like that, so he’s got to do his job as president to make it happen and I think we’ll finally get over that hump and we will see some fights next month.”

Once he is able to return to the training room and get the rounds in he needs to prepare for his next fight, there is one name that sticks out above the rest — Gilbert Burns.

Chiesa said he is only looking up in the rankings and Burns currently sits in the number six position. That is two above “Maverick.” The Brazilian is riding a five-fight winning streak and picked up a giant first-round TKO victory against fellow Brazilian Demian Maia in his most recent outing.

“I think it’s gotta be [Gilbert] Burns honestly. I love the guy, I think he’s awesome. He’s hilarious. We’ve always been pretty cordial in passing. We almost did the Quintet grappling thing together. I think styles make fights and that’d be a really fun fight. He’s coming off that big win over Demian Maia, so I think that’s a fight that really interests me. We will see what happens, but I’ve gotta get back to having a normal training schedule. He has Henri Hooft coming to his house holding pads. He’s got Kamaru Usman to train with and things like that. I’m just trying to get myself in a situation where I have some partners and some consistency before something like that happens.”