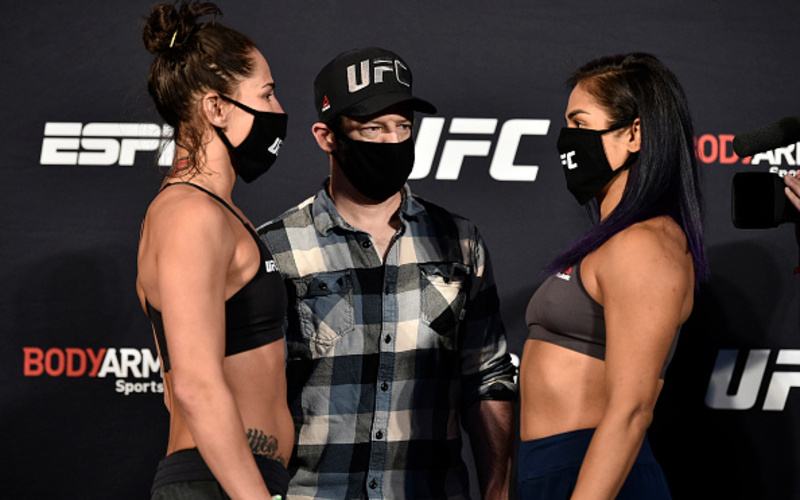 The UFC Apex hosts its third event in a row as UFC on ESPN 10 goes down on Saturday in Las Vegas. In the main event, former women’s flyweight title challenger Jessica Eye will be taking on Cynthia Calvillo. Going into her championship fight with the champion Valentina Shevchenko, Eye had put together a three fight win streak. During that time she earned decision wins over Kalindra Faria, Jessica-Rose Clark and Katlyn Chookagian. She would earn a title shot against Shevchenko in June 2019 at UFC 238. Shevchenko ended the fight in the second round, knocking Eye out with a head kick. Since then, Eye has gotten herself a win. In her most recent outing, she faced off against Viviane Araujo and defeated her by unanimous decision at UFC 245. Looking to climb back towards a title shot she was then matched up with Cynthia Calvillo.

Heading into the fight with Calvillo, Eye unfortunately missed weight, which could cause problems for her title hopes. As for Calvillo, a win puts her right into title contention seeing as she has never faced Shevchenko. Going into UFC on ESPN 10, Calvillo has put together a record of 2-0-1. In November 2018 she took on Poliana Botelho at UFC Fight Night 140, submitting her in round one. She then went on to defeat Cortney Casey by unanimous decision at UFC on ESPN 1. In her most recent outing, Calvillo took on Marina Rodriguez at UFC on ESPN 7. After three rounds, it was announced that the fight had been deemed a majority draw. Heading into Saturday, Calvillo looks to keep the unbeaten streak alive as she looks to claim a title shot.

In the co-main event, a match-up that was originally scheduled for UFC Fight Night 171 will be on display. Having to withdraw due to illness prior to their original meeting, Karl Roberson and Marvin Vettori finally face off at UFC on ESPN 10. Heading into the fight, Roberson holds a two fight win streak with a split decision win over Wellington Turman. His most recent fight took place at UFC Fight Night 163 when he faced Roman Kopylov and won by third round rear naked choke. He looks to pick up a win over a heavily motivated Vettori who has been waiting for this moment.

Vettori has also won his last two straight. His last loss came in 2018 when he lost to the current UFC middleweight champion Israel Adesanya. He went 2-0 during 2019, picking up unanimous decision wins over Cezar Ferreira and Andrew Sanchez. He looks to make it three in a row with a win over Roberson on Saturday.

Kicking off the main card will be a bantamweight fight between Jordan Espinosa and Mark De La Rosa. Espinosa has lost his last two straight by submission to Matt Schnell and Alex Perez. As for De La Rosa, he has lost his last three straight, dropping decisions to Perez and Kai Kara-France while also being knocked out in his last outing by Raulian Paiva. Following that will be a featherweight fight between Andre Fili and Charles Jourdain. Fili is coming off a unanimous decision loss to Sodiq Yusuff while Jourdain recently defeated Doo Ho Choi by second round TKO. Finally, before the co-main event will be a lightweight fight between Charles Rosa and Kevin Aguilar. Rosa most recently lost a unanimous decision to Bryce Mitchell while Aguilar is coming off two straight losses to Dan Ige and Zubaira Tukhugov.

Follow along with MMASucka as we provide you with the results throughout UFC on ESPN 10.