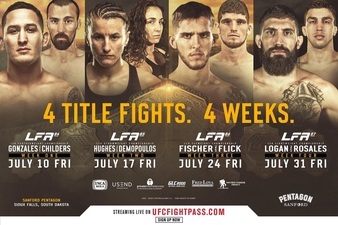 Legacy Fighting Alliance (LFA) just announced its return to action. It joins the UFC as the second mixed martial arts promotion to return to action. While major sporting entities continue to remain out of action, a few of them are making tentative returns  (such as the English premier league).

The LFA is one of many smaller promotions to air content on UFC Fight Pass. The fledgling promotion announced a return to action in July. LFA tweeted out that it will be airing four shows on July 10, 17, 24 and 31. Each of the four events will be headlined by a title fight. Justin Gonzales and Jake Childers compete for the men’s featherweight title in LFAs return event. The following week, Sam Hughes and Vanessa Demopoulos compete for the inaugural women’s strawweight title.

LFA Returns to Action in July

Greg Fischer and Jimmy Flick compete for the recently vacant flyweight title. The previous holder was Brandon Royval, who signed with the UFC. Notably, Royval won his debut fight and a performance bonus.

Finally, Bryce Logan and Jacob Rosales compete for the lightweight title on July 31. This event was first set to take place on April 17.

LFA has stated that they will be following protocol similar to what the UFC has followed. The events will take place behind closed doors.

“We brought the first sanctioned MMA event to the state of South Dakota six summers ago and have a great working relationship with South Dakota Athletic Commission and Sanford Pentagon. This will allow us to set up a safe environment for our fighters and staff, while implementing strict Coronavirus (COVID-19) testing and safeguards to control and ensure a healthy LFA residency on our fight campus in Sioux Falls. Starting on July 10th, we will host four events in four weeks with each event featuring an LFA world title fight.”