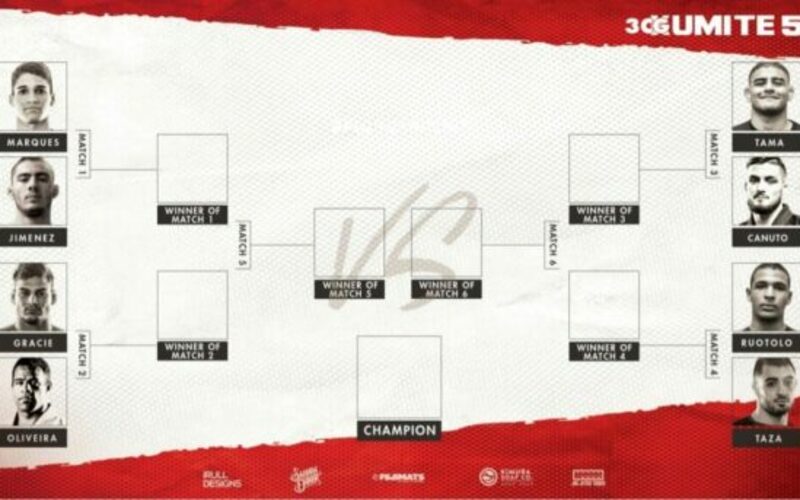 The summer heatwave continues on August 8 at Third Coast Grappling’s Kumite 5 (3GC Kumite 5), with -170-lb beasts battling it out in no-gi for $10K. While there are some familiar faces from recent Kumite events, there are a few new (and very exciting) players that are ready to mix it up with 3CG veterans.

Get ready for 3GC Kumite 5

Let’s start with the obvious wild card: Renato Canuto. Canuto is known for his very exciting style of fighting whether it’d be his famous cartwheel or backflip passing to his sneaky armbar submissions. Some may say that his style is too flashy, yet nobody can deny its accuracy. With notable no-gi wins against Garry Tonon, Marcio Andre, Vagner Rocha, and Celso Vinicius just to name a few, Canuto will thrive in 3CG’s ruleset and light it up along the way.

Tri-Star’s Oliver Taza caught attention in June at the JitzKing’s 185-lb tournament with two submission wins, most notably a 30-second heel hook finish against CTA’s Benji Silva, before losing to Fight Sport’s Valdir Araujo by decision in the semi-finals. Taza brings exciting attacks and scrambles to the tournament, which should match well with the style of the others on his side of the bracket.

Prior to the Covid-19 quarantine, GF Team’s Vitor Oliveira had a strong start to the 2020 competition season, narrowly losing to rookie black belt Jonnatas Gracie by decision in the finals of the Europeans. Although Oliveira is primarily known as a gi competitor, he is a veteran black belt that has no-gi accolades such as IBJJF Worlds silver medalist and Pan Am champion. Although this time in no-gi, he will face Gracie in the opening round.

Perhaps the dark horse of the tournament could be the 2018 No-Gi Worlds champion, Hugo Marques from Soul Fighters who has wins against Jaime Canuto, Dante Leon, and Victor Silverio. Although known for his aggressive passing style, Marques could have his hands full with the versatile Roberto Jimenez in the opening round.

In addition to this stacked tournament, there are a bunch of super fights.

The rest of the card

The super fight that stands out from this card is the battle of the brown belts – Gracie Barra’s Marinho vs ATOS’ Bradley. Both are very skilled competitors that are no stranger to the 3CG mats and ruleset. It would be hard to believe that this fight would go into OT, but like the fight itself, it could literally be a toss-up between the two for the victory.

Despite the criticism from 3CG’s last event mostly regarding streaming issues, the event’s organizers are committed to improving with each event. They’ve even upped the ante this time by offering VIP tickets and premium seating to those who have written off sport grappling as “boring” or “lame.”

Needless to say, you also don’t normally see other professional BJJ events raising money for charity or giving away a $10K cash prize at each event month after month. During these unprecedented times where most professional sports have been put on hold, we are fortunate to have quality events like 3CG to not only keep us entertained but to help continue to legitimize sport BJJ with cash prizes that athletes can actually benefit from.