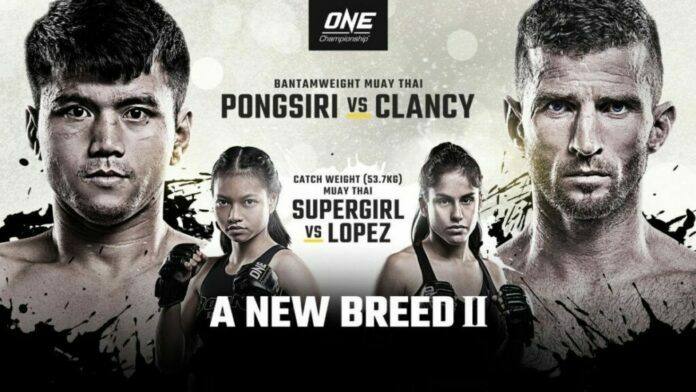 When ONE Championship presents ONE: A New Breed II on Friday, September 11, at 8:30 a.m. ET/5:30 a.m. PT, half of the six-bout line-up will feature mixed martial arts contests.

While the global pandemic continues to offer challenges for athletes and promotions alike, it also is giving athletes opportunities to step-up on the global stage and show their talents to the world. Five Thai martial artists will get that chance at ONE: A New Breed II.

Two of the contests will occur in the lightweight division, while the third will be a catchweight bout.

In the opening contest, Witchyakorn Niamthanom takes on Khalid Friggini. Friggini will be making his mixed martial arts debut. The Thai striker has a 7-1 Muay Thai record to his credit, but this will be a new world against a fellow countryman who owns a 2-1 professional record.

In the next lightweight affair, Abu Muslim Alikhanov takes on Pascal Jaskiewiez. ”Money P” posts an 18-3-1 professional mark in Muay Thai and kickboxing, but he also has experience in mixed martial arts with a 2-1 record. However, Alikhanov will be hoping to keep his 2-0 record spotless.

In the final mixed martial arts bout of the event, Prach Buapa takes on Australia’s Brogan Stewart-Ng. These two Muay Thai strikers will be making their debuts in the sport. Each man has shown their striking prowess in Muay Thai with double-digit victories, but will either man chance the ground game when they meet in Bangkok?

As the world continues its battle with COVID-19, these six athletes can immediately impact their respective divisions with big performances. The window of opportunity is there to make statements and quick leaps up the ladder.

It is also a chance to show the world how much the sport of mixed martial arts has grown in Thailand. The talent pool in the nation continues to deepen, and these athletes are prepared to show-off their skills in ONE.

Martial arts culture is ingrained in the human spirit worldwide, and the sport has brought all of those elements together. Now, athletes are able to train in all facets to combine all of their skills together and blend them into beautiful art.

With more and more top-notch gyms opening in the nation, ONE: A New Breed II is a perfect platform to showcase the continued growth of the sport in the country. It is an even better platform to establish their presence as a factor in their divisions.

After the three mixed martial arts contests, ONE Super Series will take center stage the rest of the way.