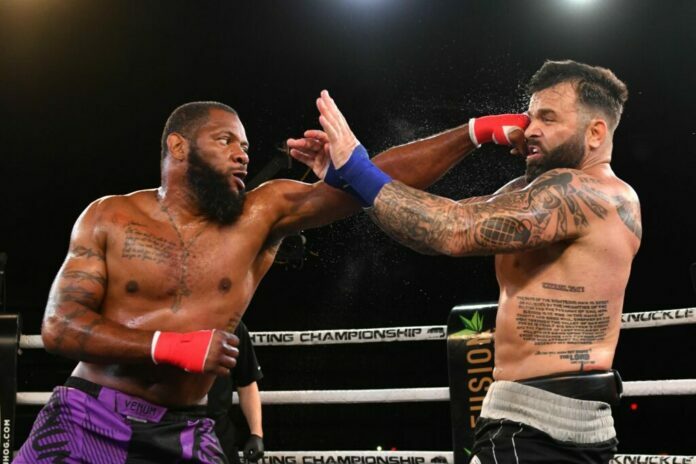 Tonight we will have Toe the Line results here as they happen. We’ll have results and fight recaps. Bare Knuckle FC and Legacy Promotors have come together to produce a nine-fight card that looks to be very exciting.

In the feature bout, professional boxer Teddy Webster will clash with Frank Tate in a battle of heavyweights. It should be a hard-hitting bout and judges will more than likely not be necessary.

Lightweight Bobby Taylor will clash with Paul Teague in the co-main event and that fight also looks to be very fan-friendly. If BKFC is any example, Toe the Line should be one of the most exciting and violent cards of the year.

Check out the Toe the Line Fight Results below:

Recap: The main event wasted very little time getting spicy. Anytime you have two guys over 250 pounds, without gloves, it doesn’t take much to end things. Teddy Webster landed a series of overhand right hands and Frank Tate was wobbled early.  Tate landed the bigger shots in the second round and is going to the body/head/body/head really well. Good fight. Frank Tate did the damage in the third round, hurting Webster a number of times. Tate extended his lead. Webster lands his best punch, a nice left hook but Tate took it well. Tate does a good job with his step in left to the body. We headed into the final round and I have Tate up big. Teddy Webster landed some huge shots to open the final round, knocking Tate down with a huge right hand. The two threw bombs at each other until the final bell.

Recap: Bobby Taylor came out and ate an overhand right that cut him on the hairline. Paul Teague was fast, but he started to eat some big shots. He took a left to the body and then a big overhand right hand, and that was that Bobby Taylor earned the TKO victory.

Kasper Caldwell def. John McAllister via TKO (Strikes) at 1:03 of Round 1

Recap: This fight was bananas. Kasper Caldwell came out firing and blasted John McAllister with a series of right hands that hurt him. Caldwell also went to the body but got countered and wobbled. Caldwell reset and plowed forward, stopping John McAllister in the first round with a big TKO.

Recap: Tee Cummins came out and landed some big shots early, however, Brian Maxwell stood in and took it well. Cummins did enough to win the first round. The second round was slow, with quite a lot of clinching and single shots thrown and missed. Tee Cummins landed a nice clean right that knocked Maxwell down in the third. It was the most compelling shot of the fight. Tee Cummins landed the bigger shots in the fourth and at one point Maxwell hit the canvas clutching his knee. He was able to continue but Cummins is starting to widen the gap here. Cummins continued to throw single shots and landed enough to secure the round. Not the best fight I’ve ever seen.

Noah Cutter def. Kaine Tomlinson via TKO (Strikes) at 1:51 of Round 1

Recap: Kaine Tomlinson came out and landed a right hand that hurt Cutter right off the bat. That was the end of Kaine Tomlinson’s good fortune. He ate a big combo and was dropped to the canvas. Noah Cutter landed basically at will from that point forward and earned the TKO stoppage victory in the first round.

Recap: Weems and Van Vo came out firing early. It was an absolute slugfest to start and both fighters stood in the pocket and threw bombs. Weems landed the more telling shots in round one. The second round was a bit slower and less damage was dished out. Neither fighter was afraid to get hit, and they landed brief exchanges. On my card, Weems held a 39-37 lead after four rounds. He just landed more shots and the harder shots as well. A decent fight that definitely had its moments. I’ve got Weems winning a pretty clear decision.