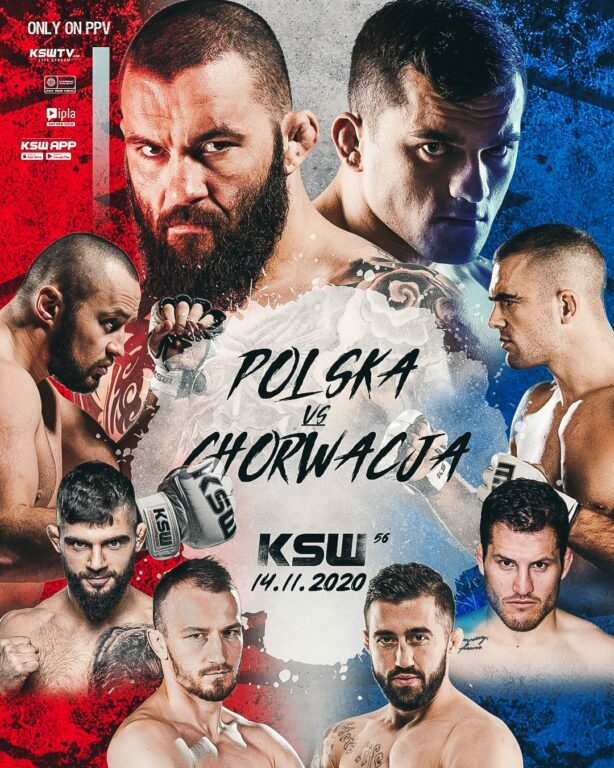 KSW 56: Polska vs Chorwacja is set to take place Saturday, November 14, 2020, live from Ludz, Poland. The event can be seen worldwide on KSWTV as well as the KSW app. Residents of the United States can also see the event on the DAZN app. Currently, the event is filled with eight bouts, one being a championship bout.

The main event of the evening will feature welterweight champion, Roberto Soldic, moving up to middleweight to take on Michal Materla. Materla is a former middleweight champion and has been on a bit of a hot streak lately. Soldic has won his last four bouts in a row, three of those by knockout. Materla has won four of his last five with all four of those bouts ending in finishes.

The co-main event will feature light heavyweight champion, Tomasz Narkun, defending his title against undefeated Croatian, Ivan Erslan. Narkun has successfully defended his title once after his failed attempt to also earn the heavyweight title. Erslan has finished his last four opponents in a row in the first round of action. He impressed enough in his lone KSW bout at KSW 51 to earn the title shot. Also on the card is arguably Poland’s two hottest female prospects with undefeated Karolina Owczarz will battle newcomer Justyna Haba.