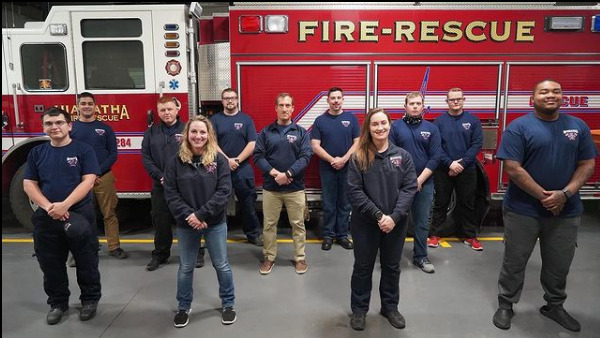 “I would like to eventually work full time in Waterloo, in my community where I was born and raised and be able to give back and help.”

Former UFC veteran Mike Rhodes is embracing a new challenge outside the fight game as he looks to become a firefighter as well as continuing his career as an MMA fighter.  Rhodes said that he had actually considered moving into the firefighter field for a couple of years whilst taking into account how many years he may have left as an MMA fighter.

Mike Rhodes, from fighter to firefighter

“I would say for probably the past five or six years now, I’ve been considering going into that field of being a firefighter,” Rhodes told MMA Sucka.  “I recently moved back home to Iowa and I’m a part of the indeed workforce kind of situation where they give you recommendation on jobs.  You know, what you put in there, they kind of send you jobs for, and one popped up for Hiawatha fire department as a volunteer…

“I just turned 31.  So I can only fight for so long and I feel like this is just something else that has been calling me to it for a while and I’ve got the opportunity and I’m thankful to be a part of the Hiawatha team now.”

Mike Rhodes told MMA Sucka that when he was young he had wanted to become a veterinarian but soon realized a job like that required a lot of ‘schooling’ therefore decided to ‘switch’ and change his focus to become a probation officer.  “Biggie” earned a degree in criminal justice but ended up not going into the field of public service as he discovered a passion for MMA.

However, he was inspired by people around him who were firefighters themselves.  Watching his teammate former Bellator fighter, Justin Lemke and his godfather Todd working as firefighters seemed to him like a ‘rewarding job’, one that meant giving back to the community.  Something which is important to Rhodes as he looks to become a firefighter in his hometown of Waterloo.

“My god dad his name’s Todd, he’s a part of the Waterloo fire department where I was born and raised,” said Rhodes.  “He’s four years away from retirement now.  So he’s been a firefighter for a very long time, and I just see the impact that he has and the things that he’s been able to do within the community.

Mike Rhodes wants to give back

“Biggie” mentioned that a significant part of his aspiration to give back to the community was due to him receiving guidance and care from two police officers (officer Greenlee and officer Harrington) that helped to put him on the right path back when he was a “young troubled youth causing a ruckus”.  Rhodes cited that not enough who have “climbed the ladder” go back and help the community.

“Being a firefighter, I get to move around a little bit more,” said Rhodes.  “I have a lot of freedom and free time where I can help out and get back to the community, which I feel like is the issue with a lot of communities, not just mine, but not enough people that climb the ladder go back and help people and help them to climb the ladder.

“So if you, if you want to reach one, you teach one, you know, and we just kind of work like that. So that’s one of the things that I really like about the fire department though, is that they’re really in with their communities.”

Right now Rhodes is in the training process of becoming a firefighter.  Training occurs every Wednesday which consists of a three-hour class where the trainees learn the basics where eventually they will receive a Firefighter 1 certificate.

Announcing on his Instagram, starting in 2021 “Biggie” will be assigned to a duty crew where he will be working 24 hours on call at the firehouse, assisting within his licensed parameters as he hasn’t got his EMT yet.  When asked whether he would like to do it full time, Rhodes said that there was still a long way to go as there are many levels to it.

“Yeah. Eventually, you know, I still have a long way,” said Rhodes.  “There’s so many aspects of it and levels, but as my fight career kind of slows down, my firefighter career will continue to move forward and I feel like this is something obviously I can do for a long time.  I don’t know how long I have fighting left, but you know, you got like Stipe Miocic.  He’s a world champion. He’s a firefighter.”

Having fought at welterweight, middleweight and now at light heavyweight, Mike Rhodes now says that he will never fight lower than 205 pounds saying the cuts to welterweight and middleweight have probably done irrevocable damage to his body.

“Dude, I’m a freaking heavyweight right now,” said Rhodes.  “I will not fight any lower than 205 probably ever again in my career.  I’m a big guy, I’ve always been a big guy…and honestly just those cuts down to 170, those cuts to 185.  They were brutal, they were bad, they were mean and I’ve probably done some damage to my body that will never be right.”

In terms of looking forward in his MMA career, Rhodes has signed a new deal with a big-time company, First Round management and hoping to compete in big fights in 2021.

Fighting is not over for Mike Rhodes

“I’m on a three-fight win streak right now,” said Rhodes.  “I think with one win here, like a recent win and a dominant fashion, I can get a call up back to the big show here at short notice or something like that, just because of my name and the value that I have and the work that I put in my resume.

“You can look and see, I don’t lose to just nobodies like I fought the cream of the crop so you can put me in there with just about anybody and you know I can hold my own.”

Rhodes mentioned at this stage in his long career he would seek bigger name fights.  Fights that would get “Biggie” excited or fights where he would be seen as a big underdog.  It seems that “Biggie” is motivated by the bigger names as this equates to the bigger cheques.

“I would love to fight big fights,” said Rhodes.  “Make the most money I can make, win those fights, travel the world doing it, have a good time, you know.