The last MMA event to be held in British Columbia was in February 2020. Well, the British Columbia fight scene could heat up in early 2021. Two promotions that run in the province are expected to hold events in March of next year.

Battlefield Fight League is back

Battlefield Fight League was the last to hold an event. BFL 65 went down on February 8, 2020, and fans were treated to three title fights. In the main event, Jared Revel tapped out Drayton Angus to defend his 185-pound gold. Achilles Estremadura earned a unanimous decision against Kerry Lattimer in the evening’s co-main event. And Jamey-Lyn Horth won the first-ever BFL women’s bantamweight championship, as she Jade Masson-Wong in the third round of their bout.

The longest-running B.C.-based promotion, BFL, announced on December 11 a match-up for their long-awaited return, almost one-year after BFL 65. A bantamweight bout between Ali Wasuk and Craig Maclean has been inked for BFL 66. This will be the promotion’s first event streamed live on UFC Fight Pass.

Just a few days after that announcement, another promotion, Rise FC announced that they will be back as well. The long-awaited return will be on March 6, 2021, for Rise FC 6.

Rise FC 5 went down on November 30, 2019. There were three title fights on the card. In the main event, Chad Anheliger defeated Brady Heistand via TKO in the third round to capture his second title under the Rise FC banner. In the co-main event, Radley Da Silva tapped out John Nguyen to capture the featherweight championship. The amateur lightweight strap was won by Raphael Ouellet, as he earned an armbar victory against Damon Marlow.

Rise FC 6 will stream live on the Imagine BC App and according to his Instagram page, former UFC fighter Elias Theodorou will be making his Rise promotional debut. 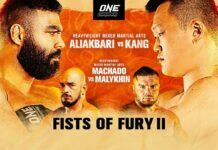 ONE: Fists of Fury II Highlights and Recap 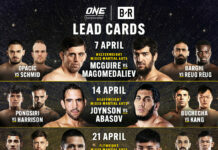 ONE on TNT Lead Card Announcements