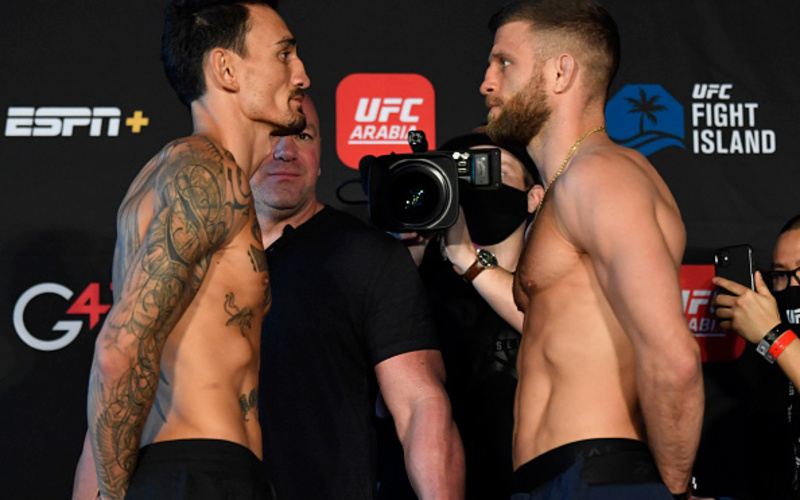 The first UFC card of 2021 is here as former UFC featherweight champion Max Holloway takes on Calvin Kattar while MMASucka keeps you up to date with UFC on ABC 1 results. For Holloway, this will be his first non-title fight since he defeated Ricardo Lamas at UFC 199. Holloway has not won a fight since his 2019 title defense over Frankie Edgar at UFC 240. Since then, he lost the belt to Alexander Volkanovski at UFC 245 before losing to him again in his most recent outing at UFC 251.

As for Kattar, this will be his third UFC main event as he enters the fight on a two fight win streak. After a three round main event loss to Zabit Magomedsharipov at UFC Fight Night 163, Kattar has been victorious in his last two outings. The first win came against Jeremy Stephens as he knocked him out with an elbow at UFC 249. In his most recent outing, Kattar defeated Dan Ige by unanimous decision at UFC on ESPN 13. He looks to pick up his biggest win yet as he tries to get past Holloway.

Also, in the co-main event, two UFC welterweight veterans square off as Carlos Condit faces off against Matt Brown. Condit last fought in October, returning from a two year layoff to snap a five fight losing streak with a unanimous decision win over Court McGee. Condit will be stepping into the octagon to face off against Matt Brown. Brown’s last appearance was during May of last year as he lost to Miguel Baeza by second round TKO.

Kicking off the main card will be a middleweight fight between Punahele Soriano and Dusko Todorovic. Both men enter the fight coming off KO/TKO wins as they look to improve their win streaks. Following that fight will be a middleweight fight between Joaquin Buckley and Alessio di Chirico. Buckley is coming off two straight knockout wins while di Chirico has lost his last three straight. Finally, before the co-main event will be a welterweight fight between Santiago Ponzinibbio and Li Jingliang. Ponzinibbio makes his first appearance in nearly two years as he rides a seven fight win streak while Jingliang looks to bounce back from a recent loss.

Follow along with MMASucka as we provide you with the results throughout UFC on ABC 1.