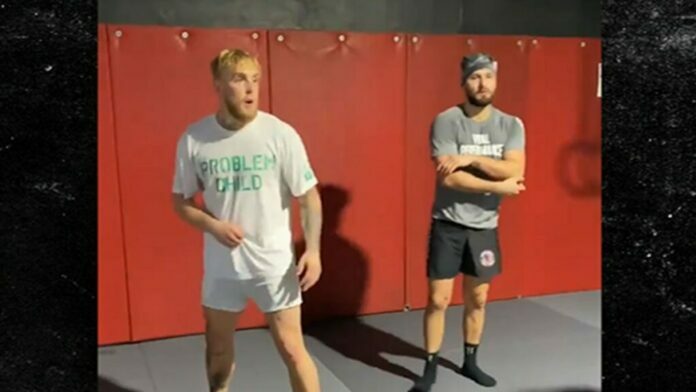 Jake Paul wasn’t lying when he said he was going to train with Jorge Masvidal.

The YouTuber turned professional boxer who is set to face Ben Askren in a boxing ring, recently released footage of himself training with UFC fighter Masvidal. “Gamebred”, who is the man responsible for knocking out Askren in five seconds back in July 2019 at UFC 239, looks like he has taken on the role of trainer for the YouTube star.

Paul posted the video through his Instagram page, promising to beat Masvidal’s five second knockout which is the fastest knockout in UFC history. He also mentioned in the caption that he was going to come after Nate Diaz afterwards.

Askren responded to the post through Twitter, clearly not impressed by the footage and labelled the pair of them as “dorks”.

You guys are freaking dorks! https://t.co/rXoF7QC66j

Youtuber Jake Paul is considered to be one of most popular and polarizing internet personalities in the world. He is the younger brother of fellow internet star Logan Paul who is also preparing himself for a boxing match to face boxing veteran Floyd Mayweather.

This will be Paul’s third professional boxing match after defeating the likes of fellow Youtuber “AnEsonGib” and former NBA star Nate Robinson. Paul finished both fighters by Round 1 TKO and Round 2 KO respectfully. Paul announced through Twitter that the fight was official whilst stating that Askren had fewer losses than Conor McGregor but vowed to knock him out quicker than Jorge Masvidal who famously KO’d Askren with a flying knee in five seconds. We will see if Jake Paul training with Masvidal will make that prediction come true.

Askren was a multiple world champion in MMA with championship belts in Bellator and One Championship and a record of 19-2. He was also a two-time NCAA division one wrestling champion. Askren retired from MMA in 2019 citing a hip injury, but had a successful hip replacement in August. This will be his first boxing match.

The American is still under contract with the UFC, who have allowed Askren to cross over into the boxing world. After starting his MMA career with a perfect 19-0 record, Ben Askren lost his last two fights against Masvidal by knockout and Demain Maia by submission in October 2019.