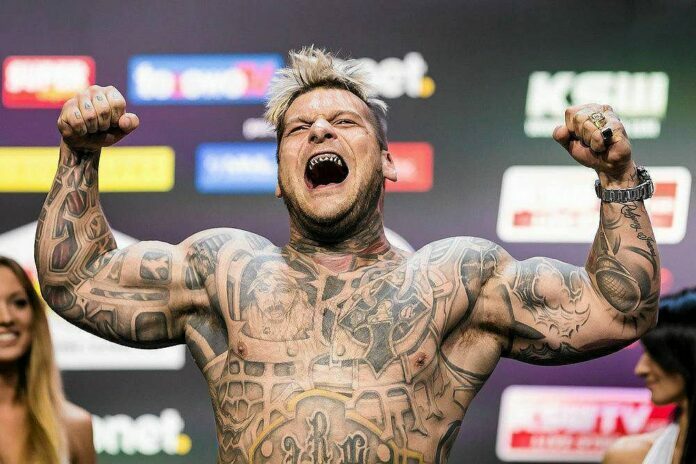 Though recently announcing his retirement, former KSW interim champion and UFC veteran, Norman Parke, stated he was interested in a no-weight limit and no-time limit bout with the enigmatic former KSW heavyweight and Polish rap star, Popek. Popek’s real name is Pawel Mikolajuw. Popek has since issued a statement on the request made by Parke.

Just shortly after announcing his retirement from the sport of MMA, Parke almost instantly states he would love an “old days of Pride MMA” showdown with Polish star, Popek. At one point both fighters competed under the KSW banner, but Parke at lightweight and Popek nearly 100 pounds more in the heavyweight division. Parke wrote, ” Normally, it’s not a game. What do you think of the old rules of Pride MMA? No weight classes, no time limit, fight to the end, the biggest PPV fight in Poland.”

Making his professional debut in 2006, Parke earned a career record of 28-7-1, including a stint as the KSW interim lightweight champion. He also fought several times under the UFC banner from 2012 to 2016. Two of his losses and his lone draw all came to the hands of one of Poland’s best fighters to date, Mateusz Gamrot. So what would a fight this odd and “out there” for Parke do for his career at this point? It would arguably garner him his biggest paycheck ever.

Currently still going strong in the world of MMA, Popek has a bout scheduled for March 06, 2021, at Fame MMA 9. He is slated for the main event against fellow Polish rapper, Patryk Wozinski, better known as Kizo. Known for his tattooed eyes and self-scarification to his face, Popek is 4-4 in his professional MMA career. In his last outing at Fame MMA 7, Popek defeated Damian Zdunczyk by armbar.

In an article with the Polish sports website, Fansportu, Popek stated, “I saw some pictures there, but I don’t take it seriously, because I’m in FAME right now and here I would have to agree on such a fight, and not somewhere barefoot, behind garages or in another federation, because I can’t. If we could get it right and everyone would say yes, why not? It’s not the first time I’ll be hit in the face and not the last.”