I’m not Surprised, Nate Diaz is wrong about McGregor and Poirier 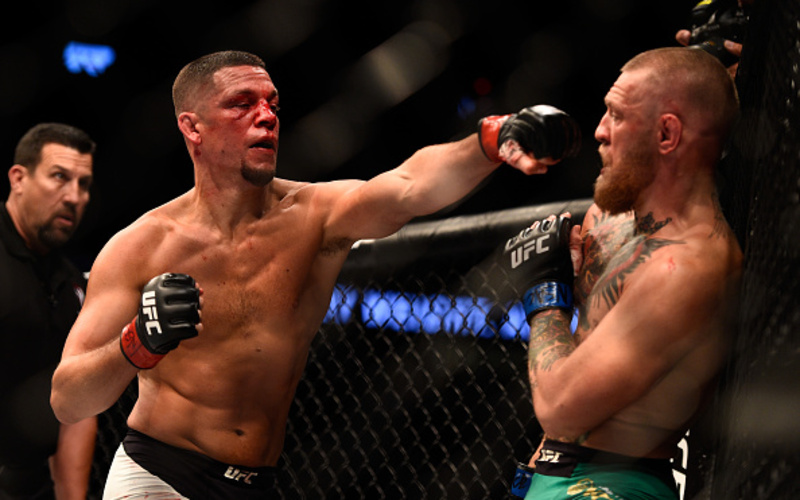 I’m Not Surprised, Nate Diaz is wrong about McGregor and Poirier

“I think Conor dropped the ball … thought it was a big old joke honestly,” Nate Diaz said, in an interview, with ESPN‘s Ariel Helwani, regarding Dustin Poirier vs. Conor McGregor. “He’s playing switching up his whole role and playing mister nice guy. And then I think Conor had it going …I think he f*cked up more than Dustin did anything good, you know.” The Irishman must have heard the Nate Diaz interview, shortly after Conor Mcgregor posts on Instagram and promises, “No more Mister Nice Guy.”

Many MMA fans emphatically agree with Nate Diaz’s (20-12) assessment. McGregor (22-5) had received a lot of criticism after his last fight versus Dustin Poirier (27-6), at UFC 257, and a lot of people are blaming the loss on the former double champion for simply being too nice to his opponents.

In McGregor’s last two bouts against Donald Cerrone (36-15) and Dustin Poirier, we did absolutely see Conor become a nice guy. He’s shaking hands at the weigh-ins and giving compliments at press conferences. This is quite a contrast to the old mean guy McGregor who was throwing water bottles, stealing belts, punching at the weigh-ins, throwing objects at a bus, as Nate Diaz is more familiar. Also, some of McGregor’s best work was trash-talking Floyd Mayweather at the Toronto press conference before their fight.

However, what we see is that Conor McGregor is a person who is always genuinely himself. In previous fights, he’s done the billionaire walk and shoving during the staredown. But he did those things because that’s how he felt in the moment; he was not doing those things for the crowd. And now, he doesn’t do the walk or the shoving because he is being genuine. If he tried the billionaire walk it would simply be false and would only be doing so to please the fans.

Is being mister nice guy why he lost though? No. And does it hurt pay-per-view sales? Also, no.

We saw a nice guy Conor in his last two fights, and he’s 1-1. The first against Cerrone; Nice guy Conor took no damage and blasted him 40 seconds. Although, Cerrone has always struggled against southpaws so it is arguable that it was simply more favorable, in terms of style, and less to do with attitude, as Nate Diaz implied. In the second bout with nice guy Conor, we saw him have a back and forth fight with number 1 ranked Dustin Poirier. Nice guy Conor won the first round. But then was soundly defeated due to Poirier’s better game planning. Poirier’s team knew the exact stance Conor would have and he made no adjustments to counter low kicks. Dustin also was able to time the right hook repeatedly and Conor made no adjustments on a combo he consistently throws. You can see Conor throwing this same 1-2 combo in nearly all his previous fights, including against Nate Diaz. Conor McGregor fought like he always does and lost because of that. Mr. Nice guy or Mr. Mean guy either way he would have lost because he made little progress in training and no adjustments during the fight.

Mean guy McGregor, looking at his fights in the past 7 years only, has a record of 4-3, meaning mean guy McGregor has a worse win ratio compared to nice guy Conor. Mean guy McGregor was seen primarily in the first Nate Diaz fight, Khabib Nurmagomedov (29-0), Jose Aldo (29-7), Poirier I, Chad Mendes (18-5), and also the Floyd Mayweather (50-0) fight. In these fights, Conor McGregor was consistently and particularly nasty during the lead-up. Some he won in amazing fashion, the 13 second knockout of Aldo is a nominee for knockout of the decade. And some he lost, regardless of how tough he acted during a press conference.

What about the cheese?

Does this nice guy moniker hurt sales? McGregor’s name alone is worth more than any trash talking. The trash-talking is fun and gets us fans hyped however raw numbers show these fights sell well regardless due to his name. According to Tapology nice guy McGregor, the last two fights, both sold over 1.3 Mil pay-per-view buys, seeing similar number for his fights against Nate Diaz. When one is as big as McGregor the name alone can be worth more than trash talking.

An up and comer looking to make a name for themselves will want to trash talk while an established name has no need to. For example, UFC champions and major stars, Brock Lesnar (5-3) and Ronda Rousey (12-2) did not even do press conferences for most of their fights and each still sold over 1 Mil PPV buys for their fights.

Who is next for Nate Diaz?

“That’s a dead division,” Nate Diaz said on the lightweight division, “I feel like I won it already.” when asked who he would like to fight next Nate Diaz asked for the two top lightweight contenders Dustin Poirier and Brazilian Charles Oliveira (30-8), the number 1 and number 3 ranked fighters at lightweight. Diaz is currently un-ranked at lightweight and has not fought in the division since 2015. Nate Diaz’s last fight was a loss to Jorge Masvidal (35-14) for the BMF title in November 2019. Poirier and McGregor have not directly responded to the callout but it seems the two will be fighting a third time, rather than taking up Diaz’s offer. Oliveira also passed on the offer saying, “No interest, homie. Goal: Lightweight belt.”

Nate Diaz is a veteran of the UFC and holds a lot of sway and respect when it comes to fans. However, his analysis of nice guy Conor and mean guy McGregor is incorrect. In fact, mean guy McGregor has lost more bouts than nice guy Conor has. To write off a performance as simply winning or losing due to attitude is not looking at the MMA game as a whole. One must include advancements in technique, timing, and footwork.  All three of which Poirier and his team were able to utilize to a fantastic victory at UFC 257.